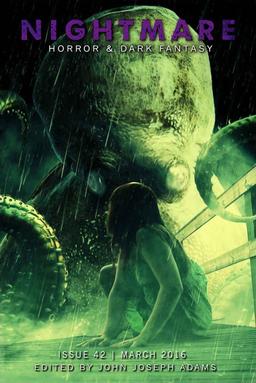 The contents of the March issue of online magazine Nightmare are now fully available at the magazine’s wesbite. This issue contains original short stories from John Skipp and Sandra McDonald, and reprints from Nancy Holder and Charles L. Grant.

“Bringing Out the Demons” by John Skipp
I pull up in front of Stanley’s four-story Los Feliz apartment building at 2:57 ayem Angie and Jack are already out front: Angie pacing, a furious smoke in her hand. Jack smiles thinly, salutes as I block the grade school playground driveway next door (the only available parking left), leaving enough room for the back doors of Jack’s van to load in if need be.

“The Modern Ladies’ Letter-Writer” by Sandra McDonald
Dear Susie: There are customary ways to begin a letter and end it, to address the envelope and set it to post. We have delivered to you (while you slept so prettily, your pale face a serene oval in the moonlight) this polite and improving manual of letters for the Fair Sex. We know you will be grateful. Do be aware that some correspondences may involve vows of fealty, freshly spilled blood, supernatural appeals to divine beings, and sacrifices of unusual scope. A modern lady avoids squeamishness about such matters.

“Lady Madonna” by Nancy Holder (from Obsessions, 1991)
It’s starting. It’s starting, and it doesn’t even hurt that much. It hurts much less than I thought it would. Not that I mind. I don’t care how much pain I endure for the sake of my baby. I can’t cry out. I can’t make a noise. If they hear, they’ll come. And they’ll destroy us. I haven’t forgotten what happened the first time. I will never forget. Here it comes. The contraction. Oh, oh, shit, it does hurt. How could I have forgotten what it’s like? What did Margaret say? It’s like crapping a watermelon.

“When All the Children Call My Name” by Charles L. Grant (from The Year’s Best Horror Stories: Series V, 1977)
Poe asked the question: Is all that we see or seem but a dream within a dream? No. But I wish it was. And in the meantime, in the waiting… another drink, another cigarette — one follows the other like sip and swallow as I look out over the porch to the fence, and the gate. In darkness. In memories. It used to be, this time of year, a season of excitement for me, when my skin tingled and my blood sped its youth—when you knew how much better it felt to go from cold to warm than hot to cool.

The non-fiction this issue includes the latest installment in their long-running horror column, “The H Word,” plus author spotlights, a showcase on cover artist Chris Seaman, an editorial, and a feature interview with director Josh Boone.

Nightmare is edited by John Joseph Adams. This is the 42nd issue. Subscriptions are available for just $1.99 per issue, single issues are available in multiple digital formats for $2.99. Purchase copies and sample free content at the website.

The cover this month is by Chris Seaman.

We last covered Nightmare with the February 2016 issue.