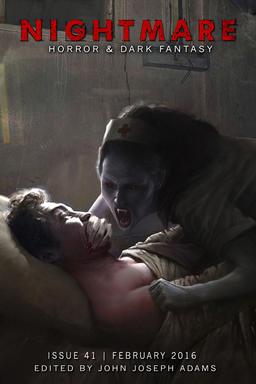 “No Other Men in Mitchell” by Rose Hartley
If I’m gonna tell this story, I’m gonna have to start with the men. In Queensland — right in the middle of it, bum-fuck-nowhere is the word — there’s a town called Mitchell. It has two pubs and a mechanic who services the road trains that pass through, and its only claim to fame is birthing Australia’s shortest-serving Prime Minister ever. I got to know Mitchell’s mechanic while I was driving road trains over the Warrego Highway between South Australia and Queensland.

“Princess” by Dennis Etchison
When the woman flips the visor down, a weak glow flickers on around the mirror. She reaches above her head for the dome light. “Turn it off,” the driver tells her. “I have to check my makeup.” “Off.” He squints at the road and the taillights smearing past like wet blood cells in the fog. “Can’t see where I’m going with that thing on.” “Walter, please…” The driver lifts one fist from the steering wheel and finds the switch in the headliner. Behind him, tiny electronic voices chirp in the dark.

“Inspirations” by Seanan McGuire (from The Edge of Propinquity, 2009)
She counts the days by the cuts on her arms. Her captors tell her the year when she asks them — one of the few questions they ever answer for her — but the numbers mean nothing. She remembers the birth of the Industrial Age, remembers men flying like Icarus flew (and falling, falling, so many of them falling, so many melting waxen wings)… but oh, even then, the numbers meant nothing. Who measures years by thousands? No empire stands two thousand years; no man measures such a span. Not even scars endure that long.

“Where Angels Come In” by Adam L.G. Nevill (from Poe’s Progeny, 2005)
One side of my body is full of toothache. Right in the middle of the bones. While the skin and muscles have a chilly pins-and-needles tingle that won’t ever turn back into the warmth of a healthy arm and leg. Which is why Nanna Alice is here; sitting on the chair at the foot of my bed, her crumpled face in shadow. But the milky light that comes through the net curtains finds a sparkle in her quick eyes and gleams on the yellowish grin that hasn’t changed since my Mother let her into the house.

The non-fiction this issue includes the latest installment in their long-running horror column, “The H Word,” plus author spotlights, a showcase on cover artist Steven Stahlberg, an editorial, and a feature interview with author David Mitchell.

Nightmare is edited by John Joseph Adams. This is the 41st issue. Subscriptions are available for just $1.99 per issue, single issues are available in multiple digital formats for $2.99. Purchase copies and sample free content at the website.

The cover this month is by Steven Stahlberg.

We last covered Nightmare with the January 2016 issue.