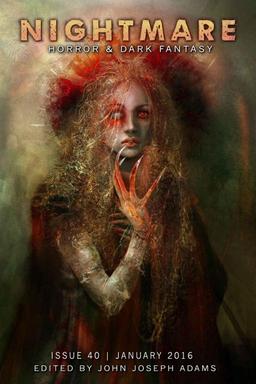 “Angel, Monster, Man” by Sam J. Miller
Tom wasn’t fiction. He was not a lie. He was a higher truth, something we invented to encapsulate a reality too horrific to communicate to anyone outside our plague-devastated circle. Maybe myth, but definitely not fiction. Myth helps us make sense of facts too messy to comprehend, and that’s what Tom Minniq was supposed to be. A fable to ponder, and then forget. We birthed Tom at one of Derrick’s Sunday coffee kvetches.

“Vulcanization” by Nisi Shawl
Another black. A mere illusion, Leopold knew, but he flinched out of the half-naked nigger’s path anyway. Of course Marie Henriette noticed when he did so. The quick little taps of the queen’s high-heeled slippers echoed faster off the polished floor as she hastened to draw even with him. “My dearest—Sire—” Leopold stopped, forcing his entire retinue to stop with him. “What do you wish, my wife?”

“There’s a Hole in the City” by Richard Bowes (from SciFiction, 2005)
On the evening of the day after the towers fell, I was waiting by the barricades on Houston Street and LaGuardia Place for my friend Mags to come up from SoHo and have dinner with me. On the skyline, not two miles to the south, the pillars of smoke wavered slightly. But the creepily beautiful weather of September 11 still held and the wind blew in from the northeast. In Greenwich Village the air was crisp and clean with just a touch of fall about it.

“Down Here in the Garden” by Tia V. Travis (from Horror Garage #1, 2000)
Daren Powell sits in The Forlorn Hope outside Truckee, California and warms his bare hands on the backs of his gloves. Despite the glowing embers in the granite fireplace, despite the crackling logs and spicy smoke, the chill has penetrated even the deepest layers of his thermal t-shirts, sweater, heavy jacket, and he finds himself wrapped in the icy embrace of the Sierra Nevadas. His drinking partner waits at the bar for another bottle of Jim Beam.

The non-fiction this issue includes the latest installment in their long-running horror column, “The H Word,” plus author spotlights, a showcase on cover artist Kirsi Salonen, an editorial, and a feature interview with former PC Gamer editor (and Star Wars screenwriter) Gary Whitta.

Editorial, December 2015 by John Joseph Adams
The H Word: Shifting Away From the Common by Jennifer Brozek
Artist Showcase: Kirsi Salonen by Marina J. Lostetter
Interview: Gary Whitta by THE GEEK’S GUIDE TO THE GALAXY

Nightmare is edited by John Joseph Adams. This is the 40th issue. Subscriptions are available for just $1.99 per issue, single issues are available in multiple digital formats for $2.99. Purchase copies and sample free content at the website.

The cover this month is by Kerem Beyit.

We last covered Nightmare with the December 2015 issue.