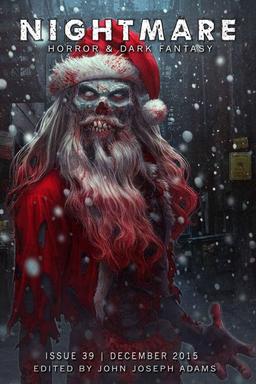 “The Judas Child” by Damien Angelica Walters
A kid in a baseball cap and a Ninja Turtles t-shirt is sitting on the park bench, swinging his legs. The boy stands off to the side until he’s sure there are no grown-ups nearby, and then he flops down on the bench, hiding his misshapen left hand while pretending to pick a scab from his knee with the other. Turtle leans forward, the hat’s brim turning his eyes to shadow. The boy guesses he’s eight, maybe, or close enough. Not too skinny either. The monster doesn’t like it when they’re skinny.

“The King of Ashland County” by Caspian Gray
Uncle Reggie couldn’t afford to fly to Ireland to find a selkie wife, so instead he drove across the country to Carmel-by-the-Sea and came back with a selkie queer. I was fifteen then, and so ready to get out of Perrysville that California sounded like paradise.

“Reconstructing Amy” by Tim Lebbon (from As the Sun Goes Down, 2000)
Sometimes life changes without letting anyone know. It’s said that a child becomes an adult when he or she recognises the fact of their inevitable death. And perhaps the process of death begins when the realisation that a partner is never, ever coming back first strikes home.

“Honey in the Wound” by Nancy Etchemendy  (from The Restless Dead, 2007)
For the better part of my life, I have borne the circumstances of Avery Channing’s death in silence, at first because I wished to forget them, later because I doubted anyone would believe the truth, and later still because I feared I might suffer eternal damnation for my part in the whole terrible business. But time has worked a certain alchemy.

The non-fiction this issue includes the latest installment in their long-running horror column, “The H Word,” plus author spotlights, a showcase on cover artist Kerem Beyit, an editorial, and a feature interview with Kim Liggett.

Nightmare is edited by John Joseph Adams. This is the 39th issue. Subscriptions are available for just $1.99 per issue, single issues are available in multiple digital formats for $2.99. Purchase copies and sample free content at the website.

The cover this month is by Kerem Beyit.

We last covered Nightmare with the November 2015 issue.