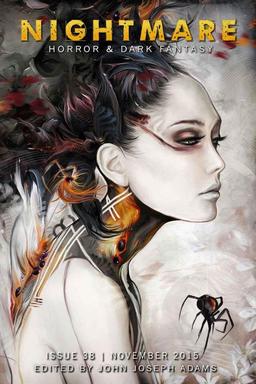 The November issue of the online magazine Nightmare contains original short stories from Matthew Kressel and Silvia Moreno-Garcia, and reprints from Gemma Files (“The Emperor’s Old Bones,” which won the International Horror Guild Award for Best Short Story of 1999) and F. Paul Wilson (another reprint from the 1984 anthology Masques).

“Lacrimosa” by Silvia Moreno-Garcia
The woman is a mound of dirt and rags pushing a squeaky shopping cart; a lump that moves steadily, slowly forward as if dragged by an invisible tide. Her long, greasy hair hides her face but Ramon feels her staring at him. He looks ahead. The best thing to do with the homeless mob littering Vancouver is to ignore it. Give them a buck and the beggars cling to you like barnacles. “Have you seen my children?” the woman asks.

“Demon in Aisle 6” by Matthew Kressel
I first saw the demon the Sunday after you died. It was 11:53 p.m. Just seven minutes until I would have grabbed my knapsack and biked home to Mom and bed and a life of sound sleep. That night the flurries were drifting down like nuclear ash.

“Soft” by F. Paul Wilson (from Masques, 1984)
I was lying on the floor watching TV and exercising what was left of my legs when the newscaster’s jaw collapsed. He was right in the middle of the usual plea for anybody who thought they were immune to come to Rockefeller Center when — pflumpf! — the bottom of his face went soft.

“The Emperor’s Old Bones” by Gemma Files (available 11/25) –  (from Northern Frights 5, 1999)
One day in 1941, not long after the fall of Shanghai, my amah (our live-in Chinese maid of all work, who often doubled as my nurse) left me sleeping alone in the abandoned hulk of what had once been my family’s home, went out, and never came back… a turn of events which didn’t actually surprise me all that much, since my parents had done something rather similar only a few brief weeks before.

The non-fiction this issue includes the latest installment in their long-running horror column, “The H Word” (“In My Restless Dreams — A Study of Horror in Video Games”), plus author spotlights, a showcase on cover artist Bruno Wagner, an editorial, and a feature interview with Jason Blum.

Editorial by John Joseph Adams
The H Word: In My Restless Dreams — A Study of Horror in Video Games by Justin Bailey
Artist Showcase: Bruno Wagner by Marina J. Lostetter
Interview: Jason Blum, by The Geek’s Guide to the Galaxy(available 11/25)

Nightmare is edited by John Joseph Adams. This is the 38th issue. Subscriptions are available for just $1.99 per issue, single issues are available in multiple digital formats for $2.99. Purchase copies and sample free content at the website.

The cover this month is by Bruno Wagner.

We last covered Nightmare with the October 2015 issue.

Our November Fantasy Magazine Rack is here. See all of our recent fantasy magazine coverage here.