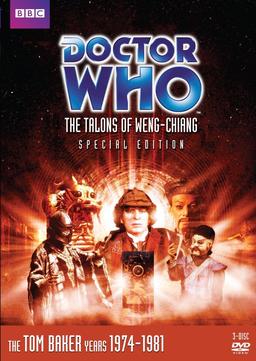 I want to espouse the virtues of a story written by Robert Holmes for Tom Baker’s Doctor Who: The Talons of Weng-Chiang. This story has got to be counted as one of the high points of (original series) Doctor Who concept and scripting.

John Bennett’s portrayal of the stage magician Li H’sen Chang, sometimes criticized because Bennett was an English actor playing a Chinese character, takes on a new light when one supposes (this is my theory) that Robert Holmes was alluding to the real-life Chung Ling Soo, the stage name of American magician William Ellsworth Robinson.

Like many stories in that period of Doctor Who under the production hand of Philip Hinchcliffe, many of the stories were pastiches or developments from old horror story tropes. Hinchcliffe and Holmes shared an enthusiasm for those old story ideas, like Frankenstein (The Brain of Morbius), Egyptian occult stories (The Pyramids of Mars), King Kong (Robot), The Day of the Triffids (The Seeds of Doom), and locked room mysteries (The Robots of Death).

But it reaches a zenith in The Talons of Weng-Chiang: we not only have an allusion to real-life ‘fake’ stage-magicians, we have subtexts or suggestions of:

…along with much music hall colour, giant rats in the sewers, and maybe even a hint of the Elephant Man?

Pardon my enthusiasm, but I really do feel there are excellent old series stories, and Talons is one of them.

This is one of my favorites. I even read the novelization by Terrence Dicks. And as an old guy, Tom Baker’s still my favorite Doctor by a longshot.

I have to agree, Fletcher — Baker is my favorite as well. Although I’ve watched Dr. Who only sporadically since the Tom Baker years, so it’s probably not a fair comparison.