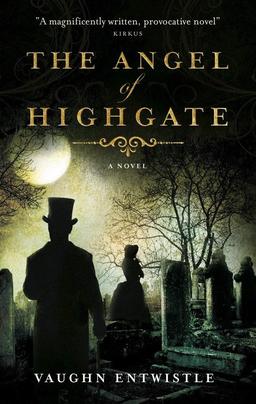 Vaughn Entwistle is the author of two volumes in The Paranormal Casebooks of Sir Arthur Conan Doyle: The Revenant of Thraxton Hall and The Dead Assassin, atmospheric mysteries featuring the detecting duo of Arthur Conan Doyle and Oscar Wilde.

The Angel of Highgate is a prequel to those books, but to reveal exactly how would be telling. It was published in trade paperback this month by Titan.

Lord Geoffrey Thraxton is notorious in Victorian society — a Byronesque rakehell with a reputation as the “wickedest man in London.” But on a fog-shrouded morning in Highgate Cemetery, Thraxton encounters a spectral wraith that stirs his morbid fascination with death and the supernatural. After surviving a pistol duel, Thraxton boasts his contempt for death and insults the attending physician. It is a mistake he will regret, for Silas Garrette is a deranged sociopath and chloroform-addict whose mind was broken on the battlefields of Crimea. When Thraxton falls in love with a mysterious woman who haunts Highgate Cemetery by night, he unwittingly provides the murderous doctor with the perfect means to punish a man with no fear of death.

The Angel of Highgate was published by Titan Books on December 1, 2015. It is 377 pages, priced at $12.95 in trade paperback and $7.99 for the digital edition. The cover was designed by Julia Lloyd.