In 1968, around the time that 2001: A Space Odyssey was in theaters, booksellers had Chariots of the Gods? Unsolved Mysteries of the Past, by Erich Von Daniken. It was such a big seller that I had no trouble acquiring a second-hand copy for 25 cents in the mid-1980s, and even as a thirteen-year old, I couldn’t make it more than a few pages into its soft-headed nonsense.

Von Daniken’s thesis of course was that the pyramids, Stonehenge, the Nazca Lines, and so on were beyond the abilities of previous civilizations, and required visiting space visitors to explain their existence.

Part of Von Daniken’s “evidence” is that the artistic styles we see in previous civilizations are better explained as ancient peoples depicting the space suits of their alien visitors. Big toke time.

There were no real mysteries to be explained, of course, unless you’re part of the tin-foil-hat brigade. This is really the 1970s’ equivalent of what we now call click-bait. Imagine: “You won’t believe who really made the pyramids!”

Now, although ancient space gods aren’t true, it sure is fun to think about. So, enter stage left: Jack Kirby. Kirby is famous for his creation or co-creation of many of the core Marvel heroes, but by 1970, he’d left Marvel for a bit of a carte blance on three new series at DC.

This was where he invented Darkseid, Apocalypse, the New Gods, and so on. However ebullient Kirby’s creativity, these series didn’t stick with comic buyers and I’m sure Kirby was disappointed. After his 5-year contract was done, Kirby was back at Marvel, with a similar deal, and in 1976, The Eternals #1 premiered, with very Von Danikenian themes.

Kirby posited that prior to Homo sapiens, giant space gods called the Celestials came to Earth and did experiments on the hominids they found.

Their tinkering gave rise to three branches: Homo sapiens, the godlike Eternals, and the demonic Deviants. This is very similar to the Kree meddling with humanity that created the Inhumans, with whose origin in the Fantastic Four Kirby was intimately involved.

The Eternals and Deviants lived secret histories of super-science and wars between each other. The Eternals were occasionally mistaken for gods in ancient times and the Deviants city of Lemuria was plunged beneath the ocean after an unwise Deviant attempt to cross the Celestials.

Kirby world was fascinating in the secret war between the Eternals and the Deviants, the weird culture of Lemuria, and the impending doom of the Celestials returning to judge how the Earth has fared, with the stakes being the survival of the planet itself.

Artistically, Kirby demonstrated a real fascination with the styles of the pre-contact Meso-American civilizations. The elaborate costumes of the Aztec and Maya monumental art became in Kirby’s pencils suits and devices of mind-boggling complexity.

But, mirroring Kirby’s experience at DC, The Eternals never really mainstreamed at Marvel, although Darkseid and the Celestials became important parts of each publisher’s mythology.

The Eternals had a few inappropriate guest stars as series sometimes do to boost sales (ex.: the Hulk), but in the end, The Eternals ran 19 issues and an annual before cancellation.

A more sophisticated 12-issue mini-series appeared in the mid-1980s centering on the Deviant Kro, his betrayals of his people and of his forbidden love with the Eternal Thena, and played much more to the plotting of the Lemurians. 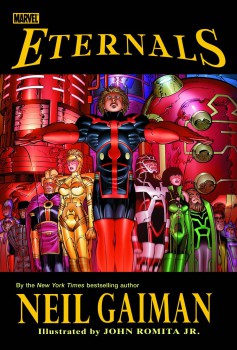 A couple more series got some face-time, including one in 2008 written by Neil Gaiman with art by Daniel Acuña, but in the end, none of them ever managed to endure as an ongoing series.

However, Kirby was on to something fascinating in his creation of The Eternals. Our modern, secular lives can feel very unplanned and without cosmic meaning, and that feeling certainly goes back to the 1970s.

The idea that we might be the product of scientific gods opens up all of religion’s questions which are fascinating and answering them with the fun mental exercise and drama of aliens. The Eternals are an important fixture of Marvel mythology and cosmology. The trick for future creators will be to find ways to make that mythology dramatic and relevant.

Derek Künsken writes science fiction and fantasy in Gatineau, Québec. He tweets from @derekkunsken and his latest story is appearing in the April/May 2016 issue of Asimov’s Science Fiction.

The Eternals was without a doubt the best work Kirby did during his final stint with Marvel, and you can actually see the point at which he said, “aw, screw this” – it’s when they forced him to bring the Hulk into the story; the difference in the writing (and to a lesser degree, the art) before that issue and after it is enormous. They just wouldn’t leave him alone to do what he wanted to do, and it’s a shame.

Yeah, the Hulk business is pretty awful, but the earlier issues are good fun. It’s one of the few series I actually tracked down and bought all of years after it was out of print.

For an easily accessible example, look in the book of Genesis, just before the flood…

Even way back in history it was common knowledge that man went from nomadic hunter/gatherers to having cities and technology almost overnight. And the explanation was “Gods” that came down from the sky to interfere with mankind’s natural progress. The ones that gave us knowledge were disobeying a greater power and were punished – citing Proemtheus from Greek Myth. Also, perhaps the greater power was right that man needed more time to develop, and the gifts only magnified man’s sins while the children grew monstrous – Christian – Book of Enoch.

Kirby mish-mashed this stuff together crudely to make a comic… Since “Space Gods” were very popular then it was a hit. But it’s a 70s marvel comic that touched on it – and I loved the issues I found – and the Romita re-do.

Thomas: Yeah. I saw another post about the Eternals where the blogger said that it was paced as if it was going to run 100 issues. Kirby and Marvel may have thinking that Kirby’s cachet would sustain that, but as the experiment at DC showed, his ideas were maybe too far beyond the superhero mainstream to be sustained in an ongoing series. Pity.

Fletcher: I was a small-town second-hand book store collector, so I managed to pick up most of the run for a quarter each and then filled it out with some visits to real comic book shops in Toronto.

GreenGestalt: I hadn’t realized that, but it makes sense. Marvel always followed trends and the 1970s had a lot of them (horror and kung fu come most easily to mind). And on the Romita redo, you’re right – it was a great series!

Bought the first issue when it came out. Not the tightest plotting, but definitely fun. Kirby’s renditions of the Celestials are mind-boggling. Gammenon! Arishem!

I love The Eternals. It’s my second favourite Kirby comic. The first, of course, is O.M.A.C..

I’m certainly due for an Eternals reread. It’s been a while. Shame on me.

Deuce: I love the Celestials! Tefral the Surveyor. Ziran the Tester. Oneg the Prober…which now sounds kind of dirty, but I’m sure it didn’t in the 1970s to a guy born in the 1917…

Swario: It’s difficult to pick a favourite Kirby book. I don’t know if we should be counting him only as writer/creator or also as artist, given how much he created as artist that showed what he would do later on – like Asgard, Attilan, the Negative Zone, etc, etc. Such a huge body of defining creative work to pick from….