I first heard of Mark Morris in 1989 with the publication of his first novel Toady (called The Horror Club in its heavily abridged US edition). I tried to scare up a copy through mail-order bookseller Mark V. Ziesing (because that’s the way you ordered books in the late 80s), but it had already become a hot property, and Mark wasn’t able to get one for me. Sudden scarcity and rapid price appreciation was the way of things in genre collecting in the late 80s; it kept things interesting. I never did track down a copy of Toady, but ever since I’ve kept an eye on Mark Morris.

Morris has written over a dozen novels since, including Stitch (1991), The Immaculate (1993), Longbarrow (1997), It Sustains (2013) and Horror Hospital (2014), in addition to nine Doctor Who novels and audio plays (see his complete back catalog on his website). His latest is the Obsidian Heart trilogy from Titan Books, the tale of reformed ex-con Alex Locke, whose attempt to steal a strange artifact from an old man ends with him on the run from the Wolves of London, a team of unearthly assassins. Sarah Pinborough says, “Mark Morris not only crosses genre boundaries, but creates an entirely new territory in the landscape of dark fiction. Part crime novel, part fantasy, part science fiction – entirely engrossing.” The complete series is:

Each volume in the series has been released in October; the second, The Society of Blood, three months ago. The last is due later this year. 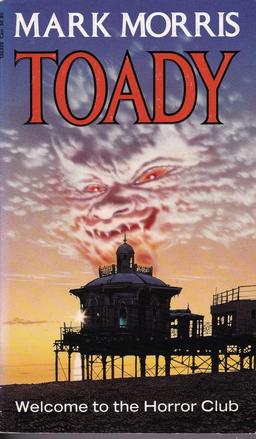 Here’s the book description for The Wolves of London:

Alex Locke is a reformed ex-convict, forced back into London’s criminal underworld for one more job. He agrees to steal a priceless artefact – a human heart carved from blackest obsidian – from the home of a decrepit old man. But when the burglary goes horribly wrong, Alex is plunged into the nightmarish world of the Wolves of London, a band of unearthly assassins who will stop at nothing to reclaim the heart. As he races to unlock the secrets of the mysterious object, Alex must learn to wield its dark power – or be destroyed by it.

And for The Society of Blood:

Alex Locke is still searching for his missing young daughter. Transported through time to the dank streets of Victorian London, his only hope of finding her lies with the obsidian heart, the enigmatic object to which his fate seems inextricably bound. Desperately seeking the heart, Alex follows the trail of a gruesome murderer that will lead him through the opium dens of Limehouse into the dark and twisted world of the Society of Blood, and ever closer to unlocking the secret of the heart – and finding his daughter.

And for The Wraiths of War:

In the final volume of the thrilling dark fantasy trilogy, Alex Locke is transported to World War One London – will he finally discover the truth about the Obsidian Heart?

See all our reports on the best in new series fantasy here.