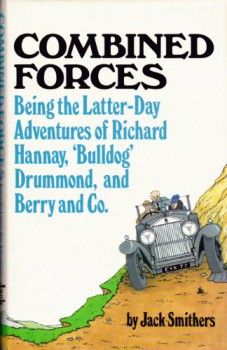 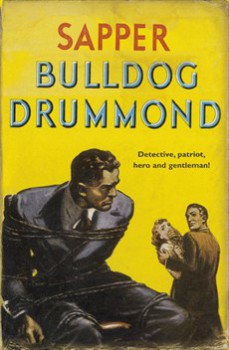 Dornford Yates’ Berry books comprise ten titles (both novels and story collections) published between 1914 and 1958. While the books are rooted in Clubland and embody the Edwardian upper class values, they are of a humorous nature that more than one critic compared to P. G. Wodehouse’s Jeeves and Wooster stories. For me, this makes for unpleasant reading as I find Yates’ humor to be cloying and forced. As A. J. Smithers notes that Dornford Yates is his primary influence, I gritted my teeth a bit at what I would find within the pages of Combined Forces. 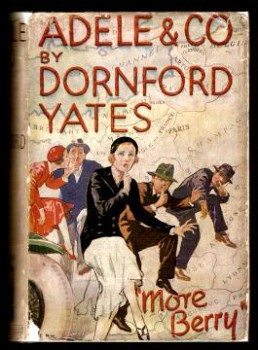 As it happens, Smithers’ novel (which is set in 1958) depicts the characters gathering together in retirement age. He ignores the chronology established by the original authors (or continuation author, in Fairlie’s case) by doing so. He captures Berry and Co. best of all; Drummond is recognizable; while Hannay is a complete blank as a character. The trouble I had with the book is that the adventure never truly starts as the author’s point is these relics of a bygone era are so far past their prime all they can do is reminisce and make half-hearted stabs at responding to political machinations involving exiled royalty, international espionage, Nazi war criminals, and Irma Peterson (from the Drummond novels).

The greatest failing of all is Smithers’ decision to mock the values these venerable characters represented to Edwardian readers. Sapper’s reluctance to do more than slightly hint at Irma’s sexual encounters are sent up by having the apparently ageless femme fatale note that lovemaking never moved beyond kissing her hand with all of the many men who fell under her spell. Worse still, Smithers has his heroes and their spouses stumble across an S&M club that they mistake for a gymnasium. This joke is repeated several times throughout the book with much alleged humor over their confusion regarding the whips and chains and two-way mirrors. 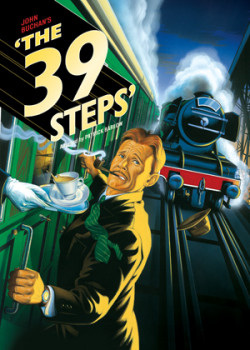 It is ironic that in mocking stuffy Edwardian sexual repression, the author takes a puerile attitude toward sexual frankness himself. Sadly, this sort of humor fills the pages alongside endless examples of how these tired and not very bright old men are unable to decide any course of action or do anything to advance the plot toward some sort of conclusion that is anything but half-hearted. I would recommend fans of Clubland fiction stick to the dignified ending given to Richard Hannay by his creator; the softening of Hugh Drummond’s intolerance and temper in late middle age by his authorized continuation writer; and even the sentimental memoirs that comprise Berry and Co.’s final two outings.

Both Drummond and Berry saw their series wind down during the same decade as this adventure. Sometimes beloved characters are best left to writers who can recreate their world faithfully or to readers who still enjoy the original works without wondering how the same characters would fare as old men and women set adrift in a world with no place for their values. Combined Forces is a witless, undignified burlesque of characters who deserved a far better send-off.