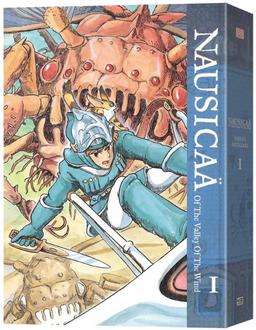 Nausicaa of the Valley of Wind will exceed your expectations. You must have many, what with the comics having been written by Hayao Miyazaki.

Prepare to ask yourself what lengths you would go to save your world from destroying itself, and prepare to detest characters who at first seem like antagonists but then prove that no one is wholly good or bad. More than anything, prepare to fall in love with Nausicaa, one of the most compassionate heroines ever to exist on paper.

The love within an individual who possesses as much compassion as she does can overcome any struggle born from hate. She does so without ceasing. Her story is told within the span of four graphic novels, and they do indeed read like novels.

The people of the Valley of Wind cherish their princess. She lives for them as much as she lives for her world. When the Ohmu, a group of insects inhabiting her world, begin a perilous journey, her compassion compels her to follow.

She then embarks on an endless journey through myriad wars, all the while attempting to bring them all to an end. Along the way, we meet memorable characters such as Kushana, an invincible warlord with a past worthy of a comic of its own and her sidekick, Kurotowa, who could do without Nausicaa. Not everyone shares his sentiments, least of all Lord Yupa, her uncle who adores her and remains by her side through much of the story.

The same can be said for Asbel, a young pilot who devotes much of his time to locating Nausicaa. His superior, an elderly pilot named Mito, guides him through life and acts as the father figure he needs.

This brings me to the relationship between Ketcha, Asbel’s younger sister, and Lord Yupa, whom she encounters with her brother. He remains devoted to her throughout the story, and their friendship mirrors that of his connection to Nausicaa. 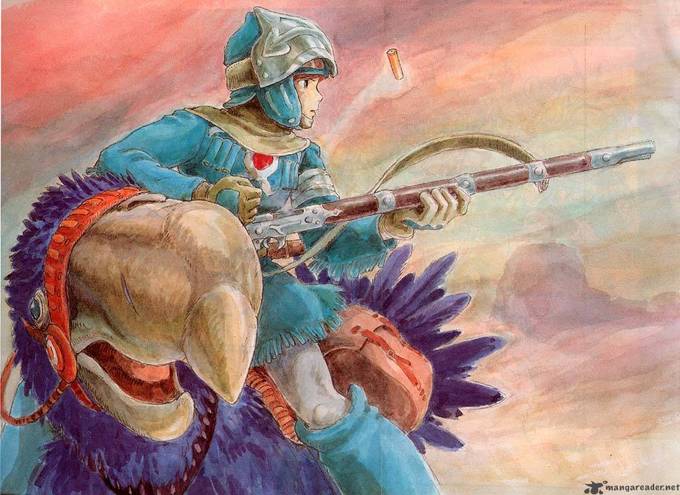 Connection remains important throughout the story. It manifests itself in peaceful and destructive ways. The connection between power and war remains raw.

The conditions of Nausicaa’s world add to the devastating impact of the unceasing wars. Nausicaa fights against the omnipresent harbinger of destruction with a tantalizing mixture of undying compassion and fearless ecoterrorism. This may sound like a stretch, but it’s likely Miyazaki has a message for his readers, and that he felt as though his readers should hear it from a courageous princess. Yet, to say Miyazaki embedded a message into his story diminishes its impact. 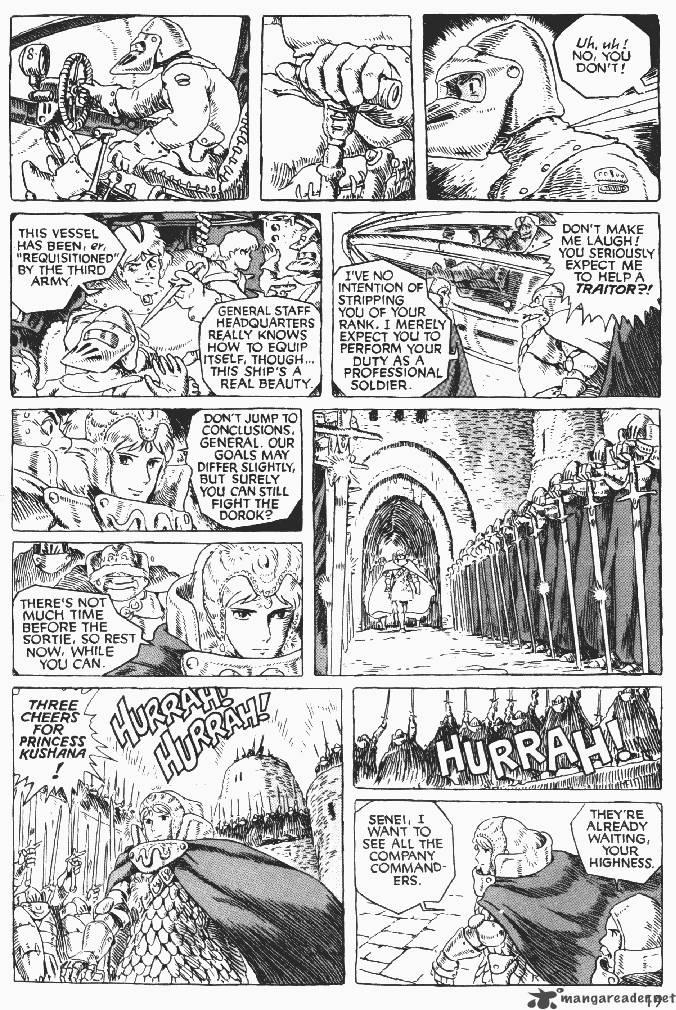 Nowadays, plenty of readers connect works to messages. Some allow them to wholly define the works. Nausicaa’s story need not be distilled in such a way. Many stories are told within the story, and they teach lessons the world must learn today.

That our animal companions have a greater love for our earth than we do and that we can learn much from them stands as one of the most poignant truths Miyazaki addresses in the story. He writes about difficult topics with a tremendous amount of compassion, empathy and sensitivity.

That’s not to say he refrains from addressing the violence and terror that engulfs the world. Young adults and the mythical creatures we know as grown-ups can read it. 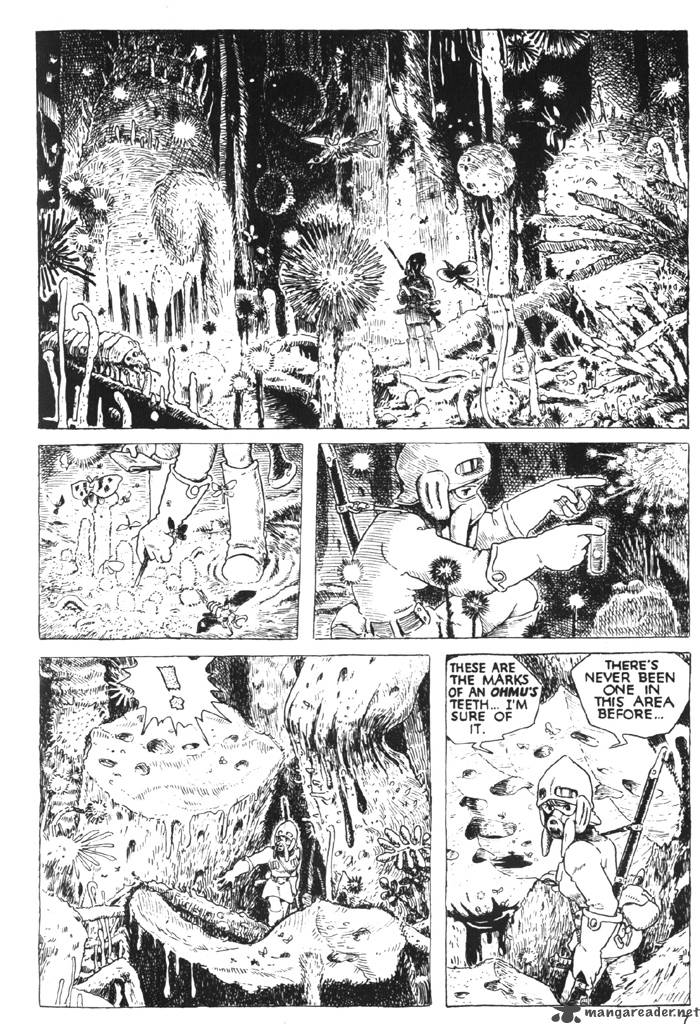 As for your little ones, I recommend you introduce them to comics with less dark moments until they have grown and can stomach the story’s darkest passages. Don’t keep these books away from them for too long, though. One day, they must learn that if you’re armed with compassion, you can end any war.

Zeta Moore is exploring work in care for individuals on the autism spectrum, and nerding out when she can.

When I read the manga I was (please excuse the trite language) blown away. When I first saw the anime film of it I was even more impressed and wowed. I’ve re-watched it several times and it, along with Princess Mononke, are my two favorite Miyazaki films, not that they all aren’t excellent. I was lucky enough to see Mononke in the hteater, big screen, big sound.

Oh my gosh, seeing Princess Mononoke on the big screen would be a profoundly life-changing experience! You are very lucky indeed! The anime version of Nausicaa is stunning, and having read the comics, you can appreciate the anime all the more. This story definitely had the power to blow its readers away! That is an apt phrase.

My kids have seen the film version, and talk in our house often turns to ohmu. I agree about the manga, though. I would say no kid under 13 should be encouraged to read it, and 15 would be a good general low number.

15 is a good age! The Ohmu are so important; your kids know who matters.

I remember it started well but then by about 1/2 way through it comes apparent that the author has no idea where to take the story and it becomes a long sequence of plot complexities with no emotional punch. Add to that that Miyazaki virtually stopped working on it to do films and only did finish it by working on it at night in a state of rush which leaves the end result of after about the third volume it becomes artless with a poorly thought-out story and even poorer, in fact, pathetic, art. And that compromises the last 4 volumes. A real missed opportunity.

The ending was difficult to stomach. The beauty of the penultimate pages made up for the brutality of it.