I’m really enjoying these recent Hank Davis anthologies, especially The Baen Big Book of Monsters and Things from Outer Space. As I’ve mentioned before, no one else today is collecting writers like Robert A. Heinlein, Clifford D. Simak, Fritz Leiber, and Fredric Brown and packaging them in mass market anthologies for under 8 bucks. Davis is making the greatest SF writers of the 20th Century accessible to casual modern readers, and that’s no small thing.

Plus, his anthologies are a blast.

His most recent, If This Goes Wrong…, showed up just after Christmas. It collects 17 tales of off-kilter futures originally published in Astounding Science Fiction, Galaxy, World of IF, Analog, and other fine publications. Just think — some kid in Oklahoma picked this book up and discovered the science fiction of the pulps for the first time. I get goosebumps just thinking about it.

Because I use virtually any excuse to scan old magazines, here’s a sampling of just a few of the magazines represented in the table of contents.

That Hubert Rogers cover on the left is one of the more storied pieces of art to grace Astounding during its early years. The story goes that Rogers (a Canadian) submitted the original art to Campbell, depicting the head of the statue of liberty fallen to the foot of the monument. But Campbell, mindful of public opinion on the eve of the US entry into World War II, had the head of the statue painted back on, and obscured the fallen head (you can still see it pretty clearly, and the crude re-rendering of the head at the top of the statue — click the image for a bigger version.)

The cover of the March 1954 issue of IF is by Ken Fagg, and the September 1965 Analog is by the great Kelly Freas.

If you like this one, you’ll want to check out some of Davis’ previous anthologies. We’ve covered half a dozen in the past two years, but here’s a more complete list.

If This Goes Wrong… was published by Baen Books on December 27, 2016. It is 351 pages, priced at $7.99 in paperback and $6.99 for the digital edition. The cover is by Dominic Harman. Read Davis’ introduction and sample the first two stories at the Baen website.

To be quite frank, I would buy this book based purely in its awesome cover. Well done Dominic Harman and Mr Davies.

I salivated a little reading this.

It is a great cover. Check out the original Frank Kelly Freas cover from Astounding Science Fiction, Oct. 1953 to see the inspiration for this one.
http://www.philsp.com/data/images/a/astounding_science_fiction_195310.jpg 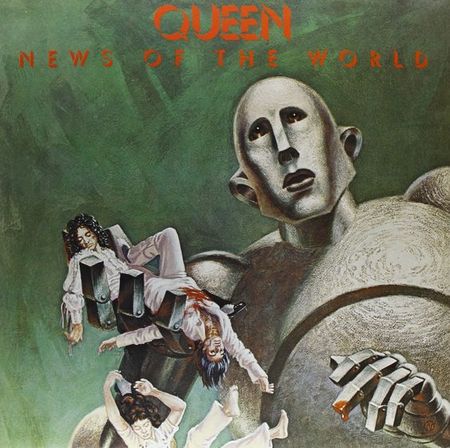 Hi, John,
Kelly Freas did the art for Queen’s News of the World, so I always thought he referenced his prior work for that painting…and now, on and on, right?

Ridiculous. That would be cheating. 🙂

I find myself thinking of “The Creature from Cleveland Depths” whenever I catch myself spending too much time on my smart phone. Ironically, I read the story on my phone.

“If This Goes Wrong….”—-what a cool title for a book. It piques my see-the-trainwreck interest button.

I love these old anthologies. I don’t understand the supposed lack of popularity of anthologies now. I was introduced to all of my favorite writers that way.

Creature from the Cleveland Depths is a fun story.

> I don’t understand the supposed lack of popularity of anthologies now.

There’s certainly no shortage of quality anthologies out there… what’s missing is mass market paperback anthologies, at least in the quantity there was a generation ago. I bought a ton of cheap new anthologies when I was a teen first exploring the genre, and I discovered dozens of great writers in the process. Today’s young readers don’t have that option — not unless they’re willing to spring for $20 trade paperbacks, anyway.

That’s why I cherish these Baen anthologies (and collections) so much. They’re really doing fine work introducing today’s young readers to the greats of 20th Century SF.