The three novels of the Viriconium sequence, The Pastel City, A Storm of Wings,  and In Viriconium, are not the entirety of M. John Harrison’s intricate, multi-faceted portrayal of the titular city. A fourth book, Viriconium Nights (1984), collects seven stories written between 1971 and 1983. Each is strange, some bordering on the inpenetrable, but all attempt to shine lights onto new aspects of the larger story.

As he did with each succeeding novel, Harrison twists, recasts, and reweaves characters, thematic melodies, and locations first found in The Pastel City.  Sometimes, as with that book’s ostensible hero, tegeus-Cromis, things seem to be exactly as they were before. Other times, particularly with the city of Viriconium itself, they are changed considerably. Its very name becomes mutable, one time being Uriconium, another just Vriko. This reminds us of one of Harrison’s central ideas: that there is no real “there” to Viriconium; it is just a bundle of words painted on a page at its creator’s discretion.

Viriconium Nights commences with “The Lamia & Lord Cromis.” tegeus-Cromis is in search of the lamia, a beast which has slain numerous members of his family. Though he appears to have accepted the same will happen to him, still he sets out accompanied by the wonderfully named Dissolution Khan and the dwarf gladiator, Morgante. The hunt ends in a morass of complications, death, and unclarity.

The second tale, “Viriconium Knights” takes place against the ongoing ritualized dueling between factions with such names as the Blue Anemone Philosophical Association and Locust Clan. Veteran fighter Osgerby Practal is defeated by young iconoclast Ignace Retz. Published in 1981, there’s a hint of old rocker facing off against young punk in the two characters’ descriptions. Practal has “long gray hair” fastened in a pony tail with an “ornamental steel clasp,” while Retz has “mad-looking eyes and hair which had been cut and dyed so that it stuck up from his heald like a crest of scarlet spines.”

Retz serves the Queen, Mammy Vooley. She is a nightmarish figure, depicted as Margaret Thatcher in a graphic adaptation of the later story, “The Luck in the Head.”

She had been old when the Northmen brought her to the city after the War of the Two Queens, and now her body was like a long ivory pole about which they had draped the faded purple gown of her predecessor. On it was supported a very small head, which looked as if it had been partly scalped, partly burned, and partly starved to death in a cage suspended above the Gabelline Gate. One of her eyes was missing.”

Forced to flee from her, he escapes and encounters an old man with mechanical birds. The old man also has an animated tapestry on which Retz observes various versions of the city’s history. The tale ends with him witnessing events that seem related to those in In Viriconium. It’s at this point Harrison starts to put aside any attempt to be unambiguous. The remaining stories vary from dreamlike to nightmarish, and coherence seems not to be a point. 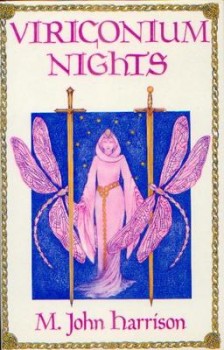 “The Luck in the Head” introduces the poet Ardwick Crome. An unnerving dream begins to plague him regularly. In it, groups of small-headed women dressed in grey fight tooth and nail over possession of a lamb, killing each other in the process. Crome believes his misery will be alleviated if he finds a woman from the dream who he is convinced exists in the real world as well. As does the reader, Crome never seems to fully understand what is going on and why.

In “Strange Great Sins” we hear about a man named Baladine Prinseps who wasted away pining for the ballerina Vera Ghillera. It is told indirectly through the memories of his nephew, a sin-eater.

tegeus-Cromis reappears in “The Lords of Misrule.” He has traveled to meet the Yule Greave at his home in the country. The Greave is responsible for some of the fortifications protecting Viriconium from an unnamed external threat.

Vera Ghillera reappears in “The Dancer from the Dance.” This time it is she who is enamored of someone: the killer Egon Rhys, leader of the Blue Anemone Ontological Association. Along with the dwarf clown called variously Kiss-O-Suck or Morgante, they end up on the strange Allman’s Heath searching for giant insects.

The Metal-Salt Marshes, Fenlen Island, the Great Brown Waste: the borders of regions as exotic as this are drawn differently on the maps of competing authorities, but they are at least bounded in the conventional sense. Allman’s Heath, whose borders can be agreed by everyone, does not seem to be. Neither does it seem satisfactory now to say that while those deserts lie outside the city, Allman’s Heath lies within it.

The concluding tale, “A Young Man’s Journey to Viriconium” unfolds in contemporary York, England. We are told Viriconium is a real, reachable place and its entrance is found in the “lavatory of the Merrie England Cafe, a little further down than the El Greco, between the Ramsden Street junction and Imperial Arcade.”

It does provide the line I think sums up this collection as well as it possibly can be:

The first time we spoke, Mr. Ambrayses told me, “Identity is not negotiable. An identity you have achieved by agreement is always a prison.”

This book and its predecessors stubbornly, at times almost violently, refuse to be jammed into any sort of genre or literary pigeonhole. Genre arises out of common assumptions and traditions that are required of works produced under its aegis, whereas these stories are clearly the very specific creations of one M. John Harrison. 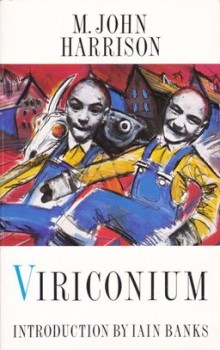 The aura of failure in the earlier books is replaced here by chaos and uncertainty that are strange and cling to the mind like spidersilk. The stories are presented not in published order but, instead, as chosen by Harrison. The first few stories present a Viriconium succumbing to violence that seems without reason. The first tale ends in murder; in the second the city’s nights are filled with fights to the death by gangs; in the third, people are quartered or burned for political or religious crimes. Jagged as this book is, it is filled with jarring moments that carve indelible images.

Art is clearly important to Harrison. Events are recalled, pegged to the opening of a particular play. Dancers, poets, painters, and philosphers figure more importantly in the events and life of Viriconium than nobles or soldiers. This fills the story with a sense of life alien to most fantasy, building a world of aesthetic ideals and achievements. At the end of the book, for all my issues with it, I’m dying to hear the “The Hunting of the Jolly Wren” or see a performance of “The Little Humpback Horse” with costumes by Audsley King.

I’m not completely sure what to make of Viriconium Nights. It has passages of wonderful prose equal to anything in the previous books. I’m unsure, though, what purpose it serves here. The stories are often opaque verging on incoherent. Characters appear, mutate, reappear, and Viriconium changes and rises and falls and is reconfiguered with a new name, but to what end? If all this book is doing is reinforcing the unreality of fiction and highlighting the gamelike aspects of fiction I get it, but it does so repetitively, yielding diminishing returns. Perhaps the stories should be parcelled out and read between the novels. Packed together, perhaps they are too rich and strange to be perfectly digested and understood. Maybe they can’t be.

Still, I will probably reread this book. Harrison has a way of making you suspect it is not a failing on his part — the writing is just so good at times — but one on yours. I feel like this book is a tightly fastened, deliriously jewelled cask that holds a treasure of great value. What it is I will not countenance to guess, but I suspect it will call to me at some future time and once again I will try to secure it.

Reviews of the other three books can be found at the links: The Pastel City, A Storm of Wings, and In Viriconium

Just a bit of trivia. The Yule Greave is surely derived from Youlgreave a small village in the Peak District, Derbyshire, England. Harrison has links with the area and is a keen rock climber, so has probably done some climbing in the Peak. Can’t say that I recognise any of the other names, though! Neil