This past Saturday was the bi-annual Games Plus auction in Mount Prospect, Illinois, an event I celebrate every year (usually by massively blowing my budget in a prolonged bout of auction fever). A lot of folks attend looking for collectible vintage SF & fantasy games, and there’s certainly plenty of those to be had. But the chief reason I go is to find bargains, and especially bargains on new games. Heck, the big reason I sit in an uncomfortable metal chair for seven hours is just to see all the new games that flash by (and to see which ones the crowd goes nuts for). It’s sort of like attending a Paris fashion show for games, a comparison I’ve made previously.

When you’re sitting in the front row and the auctioneer starts fast-talking about a fascinating new game you’ve never seen before, you need to be ready to make a quick assessment. Is it a rare out-of-print title, like that copy of Victory Point Games’ Darkest Night I foolishly let get away for $40? Or are copies still available on Amazon for 20 bucks, like that Star Trek: Five Year Mission from Mayfair Games I agonized over? I kept my smartphone handy, and got pretty adept at fast-thumbing online prices as the auction progressed.

I made out pretty well this year, carting home seven big boxes of games — including plenty that fell into both categories. Some of my most intriguing purchases included Krosmaster Arena (for $20), Z-man Games Tragedy Looper ($10), City of Horror ($12), a shrinkwrapped copy of SoulJar Games’ Torn Amor ($15), and even an unread copy of KenzerCo’s Cattlepunk Chronicles ($5). But when I got home, there was one item I wanted to get my hands on immediately, and I dug through all seven boxes until I found it (nestled at the bottom of the seventh box, naturally): Eyes of the Stone Thief, a massive adventure supplement for the popular 13th Age RPG from Pelgrane Press. Along with it I won a copy of the 13th Age Bestiary, a full color monster compendium for the same system.

13th Age is a High-Fantasy RPG originally released by Pelgrane Press in August 2013. Created by Rob Heinsoo and Jonathan Tweet, 13th Age was the Silver ENnie award winner for Best Rules, and was also nominated for Best Game and Product of the Year.

I’ve never played the game, and don’t trust myself to do it justice, so here’s a peek at the front and back covers, which do a much better job of explaining what makes it unique than I could. (Note the hilarious Penny Arcade quote at the bottom of the back page.) Click the images for bigger versions.

13th Age Bestiary is what you’d expect — a detailed and beautifully designed beastie book for 13th Age — and at the same time, it’s much more than you think. Written by Rob Heinsoo and Diverse Hands, it eschews the traditional Monster Manual approach — superficial details on hundreds of creatures — in favor of focusing on 52 monsters in great detail. And what fascinating beasts the authors selected! Haunted Skull. Elder Beast. Chaos Beast. Predatory Plant. Ogre. Naga. Lich. Each monster has multiple entries (Frost Giant, for example, details six distinct varieties. from bergship raider to ice zombie, each with a different level rating), and of course, varying stats. 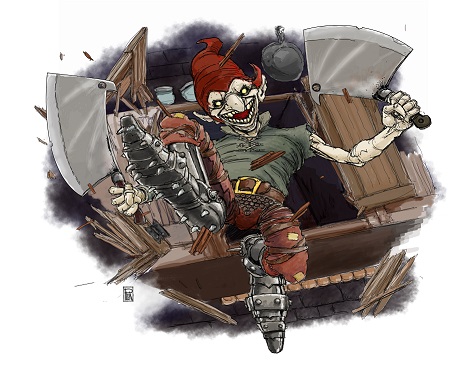 Most refreshing for me as a casual reader was the high quality of the writing. 13th Age Bestiary is written in a breezy and entertaining style that makes it a true delight to browse — and encourages a lot of playful cross referencing. Here’s a snippet from the Redcap, sort of a cross between an imp and an angry gnome.

Redcaps are neither brawny nor capable of earthshaking magic. Thanks to their insane giggling and stompy iron boots they’re not even particularly stealthy, unless they’re waiting in ambush or have teleported into the liquor cabinet, waiting for you to go for a nightcap. They compensate for their shortcomings with a bad attitude — they’re flat-out meaner and crueler than sadistic sociopaths ten times their size…

Redcaps have the ability to teleport into an unobserved space when they’re lucky in combat or when foes err by saying, or even thinking, the bad word. The word changes all the time. Obviously we aren’t really going to punish you for what your character thinks, but the idea that thinking the bad word is enough lets us punish a player who says the word, even if their PC didn’t.

Redcaps usually prefer vanishing into small constrained spaces such as closets and chests, and beneath beds. The redcaps’ magic even lets them fit into spaces that are technically too small for them. When they emerge from their tight hiding spot, they unfold or pop-out like jack-in-the-boxes. It can be humorous… in a deadly, disturbing way.

Before every battle against redcaps, the GM should determine the bad word for that battle. For PCs who don’t have any idea what’s coming, “cap” or “redcap,” is a good option. For characters who have fought redcaps before or for players who like to read monster entries, a word like “guy” or “escalation” or “attack” might suffice. Whenever a PC or a player at the table says the word, every redcap in the battle can use its impossible teleport ability as a free action that interrupts whatever action is currently happening. At least the PCs will then know what the word is… well maybe after the second time it happens. Let the players try not to think about the word now!

And because I can’t resist, here’s the opening sentence of the dreaded tarrasque.

The tarrasque is the biggest and toughest thing in the world that wants you dead.*

I challenge anyone to read that paragraph and not flip through the book looking for the ‘Koru behemoth.’ 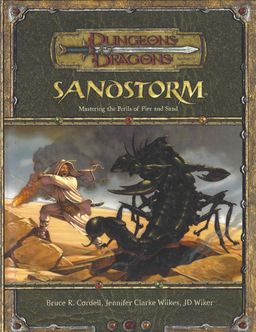 As delightful as 13th Age Bestiary is, I found Eyes of the Stone Thief even more fascinating. A massive 360-page full color mega-adventure featuring the age-old threat of a nightmare city, it’s the kind of imaginative adventure that can readily convince reluctant players to give a new system a try. Here’s the description from the back of the book:

Can you kill the dungeon before it kills you?

In 13th Age, living dungeons slither up through the underworld and invade the surface lands. The Stone Thief is the most ancient and cunning of its kind; a vast monster that preys on the cities and structures you love, swallows them, and remakes them into more deathtrap-filled levels inside itself. Now, it’s hunting YOU.

Straight up, that’s a pretty nifty idea. And like the undead sea monsters which haunt the desert landscapes of long-dead seabeds in the Third Edition D&D volume Sandstorm — maybe the best supplement to come out for that edition — they’re the kinds of epic creatures you can build an entire campaign around.

Eyes of the Stone Thief features a complete self-contained campaign taking players from 4th to 8th level, with thirteen levels of peril (from the dungeon’s opening Maw to the orc hordes of the Deep Keep, the terrors of the Pit of Undigested Ages, and the nightmare city beyond the Onyx Catacombs). Plus new monsters, treasures, traps, and factions. I don’t know if I’ll ever have the chance to play it, but I’m having a blast just reading it.

Eyes of the Stone Thief was written by Gareth Ryder-Hanrahan. It was published by Pelgrane Press on May 1, 2015. It is 360 pages in full color, priced at $49.95. The cover is by Ben Wooten. Read more at the Pelgrane Press website. I bought a new copy at auction for $15.

13th Age Bestiary was written by Rob Heinsoo et al. It was published by Pelgrane Press on August 8, 2014. It is 240 pages in full color, priced at $39.95. The cover is by Pascal Quidault, and of course there’s more detail at the Pelgrane Press website. I bought a new copy at the Games Plus auction for $1.

Our previous coverage of the Games Plus auctions includes: 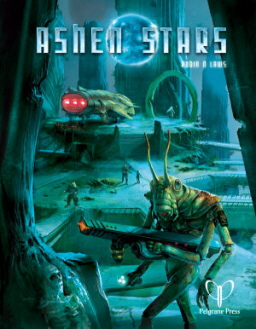