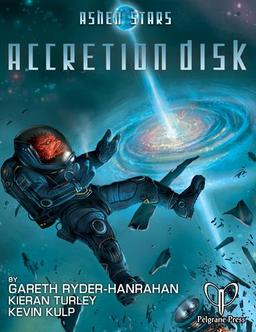 I’ve covered a great many role playing games here over the past few years. But I think it’s safe to say that none of them has captured my imagination the way Pelgrane Press’s Ashen Stars has.

A space opera set in a war-ravaged perimeter where civilization retains only the most tenuous hold, players take the roles of licensed mercs who make a living as as freelance law enforcement on a rough-and-tumble frontier called “the Bleed,” where humans and half a dozen alien races peacefully co-exist…. usually. The Mohilar War that very nearly destroyed the governing Combine is over, and the Combine is in no shape to govern the Bleed. Instead it is forced to depend on on loosely-authorized bands like the players to maintain peace, keep a lid on crime, and investigate odd distress signals from strange corners of space.

An Accretion Disk forms around massive bodies in space. Gravity drags in random objects and debris, spinning them around and bringing them in closer and closer, faster and faster, hotter and hotter, until something explodes.

It holds true for stars and black holes – and for politics and crime, too. And let’s face it –- you’re the ones who are going to be standing in the path of that explosive release. Better get ready.

Accretion Disk was written by Gareth Ryder-Hanrahan, Kevin Kulp, and Kieran Turley, and will be published in Spring 2015 by Pelgrane Press. It is 192 pages, perfect bound; priced at $26.95. Art is by Jérôme Huguenin and Chris Huth. See more details at the Pelgrane Press website.

Robin Laws and Ken Hite who both write for Pelgrane regularly can be found at their excellent podcast, Ken and Robin Talk About Stuff, talking about lots of stuff, esp. RPGS, occult, food, occult, gaming and the occult…

Thanks for the link, Robert! There’s lots of great content worth exploring. I need to delve into the Destiny Quest solo adventure books they talk about, for example. I bought one a while ago, and it looks terrific.