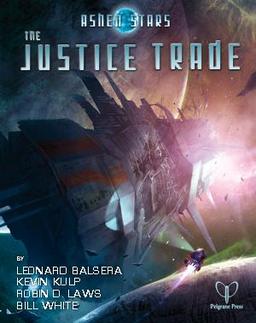 It’s been a good couple of years for science fiction role players, especially if you like your settings dark and gritty.

I have to admit that what usually attracts me to a new game is the setting and especially the adventures. I’m rarely lured in by elegant system design or the promise of new character feats or something similar. But show me a tantalizing mystery on the perimeter of known space, involving derelict spacecraft or the last desperate transmissions from a lonely mining outpost, and I’m ready to suit up.

That’s one reason I’ve been so drawn to Ashen Stars. I was much impressed by the first major campaign for the system, a 140-page book of linked adventures by Gareth Hanrahan, which I raved about in my August review, “Some Mysteries You Don’t Want to Solve: Exploring Dead Rock Seven.” Here’s what I said, in part: 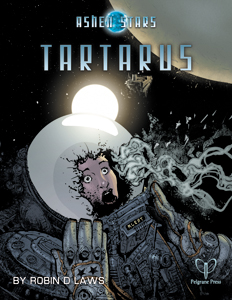 Now the war’s over, and you and your crew of freelance effectuators patrol the edge of civilized space, trying to pay the bills while you keep the peace.

But the competition in this line is fierce, and sometimes you have to cut corners — which makes you wonder if justice bought and paid for is any justice at all…

One of the things I especially like about these Pelgrane Press print adventures is they’re a great value. They collect individually-published PDF adventures sold through their website.

Many of my friends get a lot of use from PDF adventures — they’re usually inexpensive, and of course you can download them immediately and start using them right away. I’m more old school, in that I prefer bound copies I can read through at my leisure in my big green chair the night before we settle down to play.

Two of the three full adventures collected in The Justice Trade are also sold individually at the Pelgrane Press website, if you prefer to try them one at a time. The first is Tartarus, by Robin D Laws:

In this scenario of exploration and confrontation in a devastatingly hostile environment, hard-bitten lasers, who know enough not to touch the gooey stuff or take off their helmets in an untested biosphere, investigate the demise of a survey crew doomed by the above mistakes, and more.

The interstellar corporation Shrawley-Gosha Industries offers a contract for an extraction operation on a notorious Bad Planet called Tartarus. A recent SGI survey mission went awry there, with all hands presumed lost. The company seeks a crew to retrieve DNA samples from the dead team members, to see if they were exposed to an experimental viroware treatment, and, if so, whether it contributed to the mission’s failure. As a secondary objective, the lasers are to gather enough evidence to reconstruct the sequence of events leading to whatever catastrophe destroyed the original team. 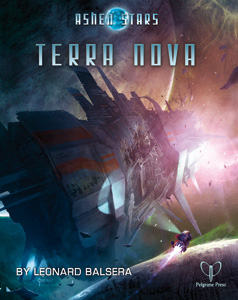 The second adventure you can purchase separately is Terra Nova:

The Terra Nova, last of the great luxury liners from the Combine’s heyday, is dead, a victim of disaster now drifting in the space between worlds.

Her final call echoes across the Bleed. The last of the survivors clutch desperately to life, waiting for rescue.

All but one, that is. One of them waits only for a chance to finish the job, uncovering a secret which the Terra Nova has kept hidden for decades.

The price of that revelation will be paid in blood.

Terra Nova is an adventure for Ashen Stars by Leonard Balsera author of Profane Miracles and co-author of the smash hit Dresden Files. It features a novel use of Gumshoe where the culprit isn’t set in stone in the adventure’s text.

Terra Nova is sold separately as a 34 pg PDF download for $10.95. Art is by Pascal Quidault.

The third included adventure is brand new. The Justice Trade, by Bill White, is 24 pages and begins when the players receive a distress call from a world that has detected a huge derelict spacecraft traveling at relativistic velocity on a collision course. Impact will mean planetwide catastrophe. 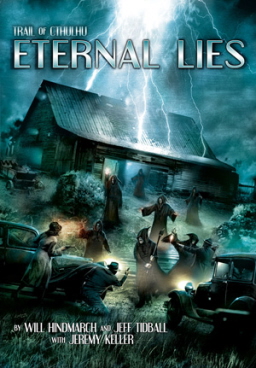 Before the players are done, they will run afoul of a two powerful and mysterious figures, who both hope to influence the outcome, and become drawn into shadowy conflicts with ramifications for the entire Bleed.

The final scenario is Kevin Kulp’s 4-page demo game, Stowaway, a great way to introduce new players to Ashen Stars. There are also five pre-generated characters included at the back of the book.

Ashen Stars continues to focus on mystery, fast action, and the fascinating interactions between human and alien at the lawless perimeter of known space. It’s a fine system with a great setting and a very bright future. I urge you to check it out.

If you like what you see, have a look at some of the other great releases from Pelgrane Press we’ve covered recently, including the massive Trail of Cthulhu supplements Eternal Lies and Out of Space, the epic fantasy RPG 13th Age, and the popular The Dying Earth role playing game.

The Justice Trade is 96 pages, black and white and fully illustrated, and available in print for $19.95. The price includes a PDF download, which is not sold separately as far as I could figure out.