Pelgrane Press has produced some of my favorite RPGs and game adventures over the last few years, including The Dying Earth, 13th Age, and the brilliant Ashen Stars. Their latest release, Cthulhu Apocalypse, is a trio of linked adventures for Trail of Cthulhu, which suppose that that the world ended on November 2nd, 1936 and, now that the stars are right, horrific aliens — and darker things — have claimed the remains of the planet.

Cthulhu Apocalypse consists of three standalone products. The first, The Dead White World, contains five linked adventures in the aftermath of disaster that take Investigators through Britain, across the sea to America, and beyond the veils of reality as they struggle to survive. The Apocalypse Machine is a sandbox setting for the award-winning Gumshoe system, which gives Game Masters the tools to create their own global catastrophe, from the first strange rumblings to the final, cataclysmic event. And the third, Slaves of the Mother, contains three long adventures set years later, as the few survivors find their humanity cracking and moulting in the process of becoming something new. 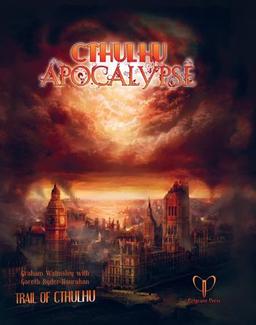 Pelgrane Press has also announced a massive omnibus collection of all three, Cthulhu Apocalypse, which will also include eight all-new scenarios that give your players the choice as to whether — and how — humanity survives in this strange new world.

Finally, the stars had come right; and things that lurked under the seas for eons rose to claim their rightful place. Now, they rule the earth, stalking it like titans.

Millions of women and men died — yet you survived, doomed to wander the ruins, searching for answers. What went wrong? Are there others like you? How can you stay alive? And is there a way to put this right?

Cthulhu Apocalypse is a survival horror supplement for the Trail of Cthulhu roleplaying game that takes Investigators into a terrifying post-apocalyptic world. Using the award-winning Apocalypse Machine, GMs can destroy the world any number of ways — including the death rays of alien tripods, a plague of white flowers, or the rising of Great Old Ones — and run adventures of investigation and survival in a land transformed beyond recognition.

Cthulhu Apocalypse was written by Graham Walmsley with Gareth Ryder-Hanrahan, and published by Pelgrane Press. The omnibus collection is 216 pages, available in both hardcover (price to be announced) and PDF ($20.95). Get more details at the Pelgrane Press website.

Again, I want to send these to a showrunner at HBO or some such.

What might be more marketable in a tv/movie sense is Kenneth Hite’s Night’s Black Agents RPG which deals with burned spies and vampires fighting each other across Europe, also available from Pelgrane…