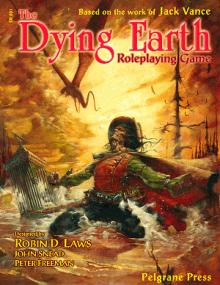 Pelgrane Press has announced that one of my favorite role playing games, The Dying Earth, is available again after several years in limbo.

The Dying Earth is, of course, based on the famed fantasy books by Jack Vance, including The Dying Earth, The Eyes of the Overworld, Cugel’s Saga, and Rhialto the Marvellous. The RPG was written by Robin Laws, John Snead, and Peter Freeman, and originally published by Pelgrane Press  in 2001.

I’ve never actually played The Dying Earth role playing game.  It appeared after I moved from Ottawa to Chicago and left my gaming group behind, and before my three children stopped throwing the dice at each other and got old enough to game with. So why is one of my favorites?

Because there’s plenty to enjoy about The Dying Earth RPG, even if you never use the rules to guide your dice arm. The support materials were superb, especially the accompanying magazine, The Excellent Prismatic Spray — whose contributors numbered Gary Gygax, Robin D Laws, Jonathan Tweet, Monte Cook, Keith Baker, and many others — and which published seven fat issues before following the game into limbo. 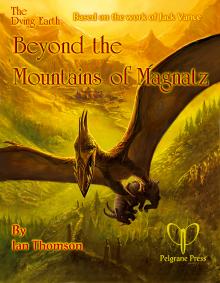 Much of the content of the magazine and the additional support material were written in studied imitation of Vance’s witty and erudite style, and made terrific reading.

Who knows why the game was out of print for so long?  A licensing issue, most likely.  But it’s finally back, and Pelgrane has wasted no time gearing up the presses again, releasing the first new supplement in several years: Beyond The Mountains of Magnatz by Ian Thomson, a picaresque series of adventures for Cugel-level characters:

You may have thought your adventurous rogues trapped in the barren north until the sun went dark. But no, the former Lords of Cil are on the move again. The adventurers must evade becoming victim to the ancient menace of Magnatz in the sinister town of Vull, progress through greater and lesser challenges, both natural & magical, as they struggle across the savage mountains, explore strange hospitality in the valley of the mighty Pharesm, and survive lands populated by an army of basilisks, before winning free to the civilized lands of the east.

The Dying Earth RPG is a 192-page hardcover priced at $29.95.  Beyond The Mountains of Magnatz is a 96 page PDF, and sells for $9.95.  Both are available at the Pelgrane Press website.

[…] been a huge fan of Pelgrane Press since they published the superb The Dying Earth role playing game nearly a decade ago, and began supporting it with one of the best small press […]

[…] Early Jack Vance (so far), including Dream Castles. And one of my favorite role playing games, the Dying Earth RPG, was published by Pelgrane Press in […]

[…] The adventures in Out of Space were created by Gumshoe designer Robin D. Laws, Adam Gauntlett, and Jason Morningstar. It also features extensive player handouts, pre-generated characters and exclusive new essays from the authors. It follows the Trail of Cthulhu collection Out of Time, which collected four earlier adventures. We last covered Pelgrane Press with their ENnie Award-winning Ashen Stars, their epic fantasy release 13th Age, and one of my favorite RPGs, The Dying Earth. […]

[…] began in 2001 with one of my favorite RPGs, The Dying Earth, based on the rich world created by Jack Vance. More recently we covered their ENnie Award-winning […]

[…] of Cthulhu supplements Eternal Lies and Out of Space, the epic fantasy RPG 13th Age, and popular The Dying Earth role playing […]

[…] If the name Robin D. Laws sounds familiar, it should. He’s authored some of the most acclaimed role playing products of the last decade, including several that we’ve loudly trumpeted here at Black Gate — such as Ashen Stars, HeroQuest, Hillfolk, and The Dying Earth. […]