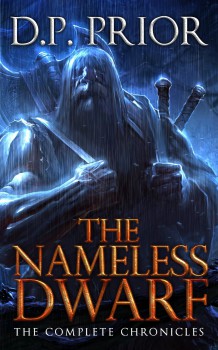 I have a soft spot for dwarves. I consider elves over-used Mary Sues and I could go another decade or two without reading another story about fairies, but give me short smiths with beards and axes who drink too much and I’ll keep reading. Which brings us to this month’s self-published book: The Nameless Dwarf: The Complete Chronicles. This wasn’t a book that the author submitted to me by my normal process: I’ll get back to those next month. This time, I actually bought the book from Amazon for actual money, because hey, it was about a dwarf.

Nameless (and yes, everybody calls him Nameless) has a bit of a history. Much of it is chronicled in earlier books, only a couple of which seem to be available from Amazon. Because of this, I decided to take a chance on The Nameless Dwarf without reading about Nameless’s previous adventures. The problem is that the backstory is a bit much to take in all at the beginning. The long and short of it is that Nameless came in possession of a cursed axe. Despite this, he engaged in a number of adventures with the well-known hero Shader, but later, the axe overcame him and caused him to do all sorts of unsavory things, including butchering a lot of his fellow dwarves and becoming a tyrannical dictator and driving them to war, until at last his people fled. When Nameless was finally freed of the cursed axe, he decided that he needed to seek his people out, not to ask forgiveness, which was impossible, but to tell them they could go home, before their exile in the nightmare lands of Qlippoth destroy them utterly. And that’s where the novel begins. I can’t help feeling that the backstory would have had more power if I had been able to read the earlier books and there were plenty of references to people and events from the previous stories that I would have liked to know more about. But even so, there was enough explained at the beginning that I wasn’t entirely lost.

As “The Complete Chronicles” subtitle implies, this novel is actually an omnibus of five novels: The Ant-Man of Malfen, The Axe of the Dwarf Lords, The Scout and the Serpent, The Ebon Staff, and Bane of the Liche Lord. I was originally just going to review the first book, except that I found that it was really, really short—just 12% of the total Chronicles, or approximately 62 pages. So it was basically a novella. The titular ant-man has a very short part before Nameless kills him in a spectacular manner. So the primary purpose of the book had little to do with the Ant-Man and more to do with introducing the protagonists. Aside from Nameless, there’s Nils, who’s a young, incompetent criminal with a surprisingly good heart. The scholar Silas, who’s in over his head in the study of a dark grimoire, and Ilesa, an unreliable, shape-changing assassin. You might consider them an adventuring party, except that they’re closer to an anti-party. Every one of them brings more trouble than value to the party, and I suspect that Nameless would have been better off on his own. Silas’s quest, in particular, has the makings of a disaster all over it, which Nameless himself recognized, and you can’t help but wonder if things would have turned out better if Nameless had tried to put a stop to it sooner.

The first three books follow a rather simplistic plot structure. A problem is introduced and then overcome with a minimum of fuss, often by Nameless’s preternatural fighting skills. And then on to the next book. If that was the extent of these novels, I’d consider them an entertaining collection of novellas, but not really engaging. Things become interesting when Nameless actually finds his people, at the end of the third book. Of course, his people want nothing to do with him: they’re mainly concerned about the best way to execute him. Needless to say, his companions come to his rescue, and drag him into worse trouble, which releases a threat that intends to exterminate the dwarves once and for all. It’s up to Nameless to rescue his ungrateful people and that leads to the fifth and final book, which is the longest of them, at 200 pages and 40% of the complete e-book. It is also the best. Nameless has to win, if not forgiveness, at least a measure of trust from his people. Only that will enable him to rescue them from the Liche Lord Blightey and his feeders. His struggle to save his people and his friends, goals which are not necessarily compatible, is the heart of the novel. To do so, he also has to overcome his own crippling bouts of depression, which threaten him with helpless listlessness when urgent action is needed.

What I found most interesting was Nameless’s own inability to forgive himself, even while his people’s hatred gave way to grudging admiration. By the end, many of the dwarves were willing to offer forgiveness, but Nameless remained unable to accept it. Nameless’s actions and emotions here were believable, though I sometimes questioned how realistic his fellow dwarves’ were. It seems to me that it would take more than just a few days, no matter how traumatic, for the dwarves to forgive his previous butchery. Nameless’s companions undergo parallel, but ultimately different, struggles. In addition to learning self-forgiveness, they also need to find their courage: something that Nameless never seems to have a problem with.

One thing that impressed me right from the beginning were the fight scenes. Nameless is implacable, but not invulnerable, and the scenes give a good sense of how tough and strong he is, while never descending into cartoonish invincibility. The fights are well-written, clear and concise without skimping on detail or ending anticlimactically. I never lost track of what was going on or got bored and hoped the author would get on with it.

I should mention that there is a perhaps excessive amount of crudeness in the books. Not just with language, which mixed both normal curse words and invented ones, but also with the characters’ trying, and sometimes failing, to control the contents of their stomachs or their bowels or their bladders, in response to the repulsive horrors that they face. While you can argue that this adds to the realism, I could have done with less.

So after complaining about not being able to find the earlier books, I really want to read about Nameless’s earlier adventures and how he fell from grace. I’m a bit worried that I won’t find them as enjoyable now that I know how his adventures end, but the fact that I still want to read them indicates that Nameless has grown on me as a character and the hints at the mysteries of his earlier life were effective. As for the Chronicles themselves, while the first few books were too short and not very deep, the last two were much better and brought the series to a satisfying conclusion.

The Nameless Dwarf is available at Amazon (e-book or paperback).

Nancy Berbereck’s dwarves are really good, and she does Old English references like and Inkling. I’m thinking of The Panther’s Hoard, and Shadow of the Seventh Moon, but even her Dragonlance stuff is good.

Thanks, Bruce. I’ve heard of Nancy Berbereck, but not those books you mentioned. I’ll look into them.