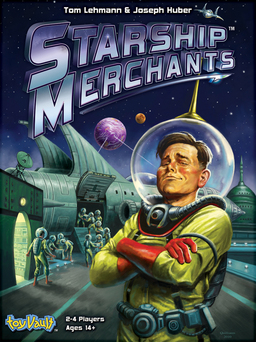 Well, I survived the Spring Auction at Games Plus.

Not just survived, but triumphed. I brought home a fabulous assortment of treasures old and new, including classic titles from Task Force Games, Metagaming, Avalon Hill, FASA, and dozens of others. Overall, I carted home four boxes of games.

Not a bad haul, I happily told Alice. She wasn’t quite as happy as I was. Not only did I go a bit over budget (say, by about three boxes), but I have nowhere to put them. So much negativity and just when I finished crushing my enemies and driving them before me.

Always a delight to find some items on my want list. But at the moment I’m most intrigued with the surprises — the games I didn’t even know existed until they showed up on the auction block. They include a gorgeous pair of deck building games from Privateer Press, both called High Command for some reason (Hordes: High Command and Warmachine: High Command. Why? Who knows), and the oddity at left: Starship Merchants. One copy came up for auction, and that cover art spoke to me. It said, Take me home. And I said, Yes sir. Ten bucks later, it was mine. Looks like a neato game, too.

Did you know about this game? I didn’t. According to Board Game Geek, Starship Merchants was designed by Joe Huber and Thomas Lehmann, and published by Toy Vault in 2012. New copies retail for $34.99; I bought a slightly used copy in beautiful shape for 10 bucks.

When I have a few minutes, I’ll arrange some of the more interesting titles I brought home in a big pile and take some pics for posterity  (like I did last year, the year before, and Spring 2012). But first, I’ll report here on the best surprises. Stay tuned.

Do you prefer the Spring or Fall auctions?

I find the Fall auction to be a good source of material people unload from their impulse Gen Con buys.

Believe it or not, I think I’ve only attended one Fall auction (I’m usually in the doghouse with the misses for 5-7 months after the Spring auction, so it’s a bit risky to try two in one year…)

But to be honest I never really noticed any difference in character between the two auctions. I like your theory, though… it makes sense!

Waiting for Miko and Deuce to appear at any moment and vehemently object to your Conan reference without first killing a goat and placing it on the alter of Robert E. Howard.

Technically, I think the line, “To crush your enemies and drive them before you, and to hear the lamentations of their women” was written by John Milius, the Director of CONAN THE BARBARIAN, not Robert E. Howard. But then again, I’ll probably get crap for not knowing for sure…

Oh believe me, I know, but you’re for the chop regardless. All things Conan are equally sacred and not to be trifled with by mere plebs…