Welcome to the second round of discussion on C.J. Cherryh’s classic 1981 novel Downbelow Station. New to the program? Check out the first and second rounds. We lose Chris on this one, perhaps a casualty of a bad Jump from the Beyond. Fletcher and myself carry the standard of the Black Gate Book Club as best we can! 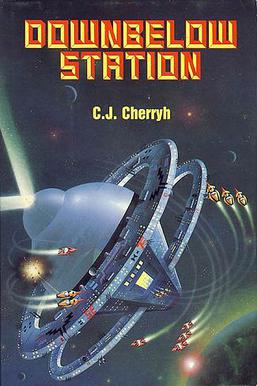 Third round! And it is appropriate that I just started book 3 of DbS.  I’m on page 190, so I have surpassed my previous record of 169.

What can I say at this point? Well, my guess that conspicuously-absent Admiral Mazian was, in fact, behind the destruction of several company/neutral stations has borne out to be true!  I guess the big game is to try to force the Union to take control of these damaged stations and spread themselves too thin?  And to put all their resources at a station called Viking—the only 100% working station in Union space, I guess?  And to attack/destroy/cripple it and thus break the Union.

Of course, Union seems to be playing the same trick — forcing the refugees all to Downbelow Station, which has now become the one 100% working station in Company space.

So that’s what the power-players are doing, and everyone else is just running around between their feet.

I like how Cherryh illuminates parts of the plot, then occludes other parts. The sudden retreat of Mazian’s fleet from the Viking attack — was it due to Ambassador Ayer’s orders, or some other factor?

But again, I have to say that Jon Lukas, who does the right things for the wrong reasons, is still coming off as one of the only active people in the book. Honestly, how hard is it to get on the goddam PA system and say “Yes, the fleet is coming, no we are not all gonna die, keep calm and carry on.” Hard enough that only Jon Lucas can do it and keep Downbelow Station from tearing itself apart in a panic!

Satin, the Downer now working on Downbelow Station, is also active in that she is following her vision-quest thing regardless of what the older Downers and the Lukas-men and everyone else thinks.

Adrian, congratulations on making it this far. According to the little number in the corner, I’m 81% done with the book, and I’m itching to get to the end. I loved the slow-burn buildup of the first half as she introduced the players and revealed their hopes or schemes, but the explosive transition to murder/chaos/war is fantastic. Halfway through, or so, a switch gets thrown and everything changes. Without getting too bogged down, she manages to show you the storm raging in, around, and below Pell Station through the eyes of all the major characters. The only perspective we really don’t get to see is that of the refugees. We know they’re legitimately scared and angry, but, given no explicit voice in the story other than that of the craven Kressich, they remain a terror that’s faceless. The refugees assigned to the work details on Pell are given the chance to be more likable, but a little more insight into their overall plight would have been valuable.

I don’t really know if Cherryh’s ever talked about as a writer of cinematic action, but she should be. I’ve written elsewhere, she may not have been the first person to write space battles that incorporate real physics and the difficulty of fighting over vast areas at tremendous speeds, but I haven’t found anyone who does it as well. The overriding element of space combat seems to be tremendous uncertainty. The terrible apprehension of Mallory and her crew is palpable during the battle between Mazian’s and Union’s forces. Filmed, I think it would look amazing.

One thing reading DbS has done is inspired me to follow up by reading the four Merchanter books: Merchanter’s Luck, Rimrunners, Tripoint, and Finity’s End. Interestingly, the latter spins off an incident mentioned in DbS. I’ve read the first two, years ago, but not the latter two. All of them take place in the aftermath of DbS. 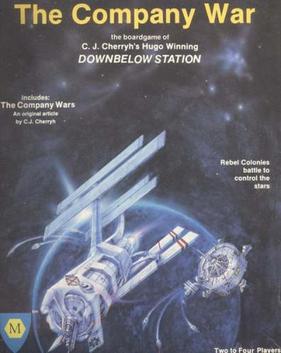 I was feeling pretty good about myself getting to page 190, but that’s only about 1/3 of the way through. Paltry compared to your 84%.  Clearly I am the slow elephant.

Regarding this ‘halfway point’ you speak of when she shows the various storms raging — Bring it! She can show ship-to-ship combat in the trackless Deep? Coulda fooled me, as she didn’t bother to show the actual battle of Viking station!  Just the aftermath of the retreat.

Kressich and the refugees in quarantine are an endless source of dread for everyone involved. I feel for the guy, he has responsibility, but no authority. His immediate power comes from the guards that he doesn’t trust (for good reasons, it would appear). Not to get all Jon Lukas about it, but that’s what you get when you don’t have the damn sense to send a cadre of your loyal station security to augment your puppet representative.

I actually read Merchanter’s Luck back in the day, after I read the Chanur books. I have very little memory of it. Paranoia, claustrophobia, something about the comp keys.

Getting back to the Downers, one of the things that I find quite fascinating is that Cherryh has one character who, outside a very brief scene before his demise, is only described by the people who knew him — Bennett Jacint. A saint to the Downers, a total pain-in-the-ass to Jon Lukas. He’s like a saint to the Downers, and barely a blip on the radar of anybody else. It is pretty cool, reminds me of the character of Esteban from The Life Aquatic with Steve Zissou.

Of course, I also suspect that Jacint might not really be dead. Perhaps he went native and luxuriates in the adoration of the Downers in some up-river location.

Adrian, I love your description of Merchanter’s Luck. That’s a pretty succinct description of a lot of Cherryh’s books. It was the first of her books I read after having been overwhelmed by the Faded Sun trilogy. My dad gave it to me while I was laid up in the hospital with a broken arm. I was fifteen and I hadn’t read anything quite like it. It was a bit hard to follow at times, but man, did it zoom along at full throttle. It was the gateway that made me pickup Chanur and go back and retry the Faded Sun.

Surpassed Adrian’s paltry page-count?  Have feelings regarding Fletcher’s bold assertions?  We welcome them in the comments!

I always sort of wanted to play the Mayfair game, but I had my doubts it was any good.

The big reason to get the Mayfair game (which, sadly, I don’t have) is because it had a couple pages of Alliance/Union history that Cherryh had written that didn’t appear elsewhere. I’m pretty sure it’s on her website these days, happily.

I don’t think Viking was the only working Union station — Union had actually gotten a lot bigger and more widespread than anyone Earthside realized — but Viking was a key logistical point on the route between Earth & Union, so taking it out would’ve crippled Union’s ability to get to Earth. Or something like that; I really do need to reread this book.

And I’d also love an adaptation, preferably as a miniseries. I see lots of Cherryh DNA in Babylon 5 and Battlestar Galactica and The Expanse (via the books in the latter case).

I bought that game! Like Fletcher, I figured its main appeal was the the property tie-in, and ignored it for years. But I read a review that claimed it was a neglected classic, and finally picked up a copy about 10 years ago.

Joe H. Like you, I wasn’t 100% sure just what the Viking Station/Union relationship was. And I read that part twice! There are a lot of things like that in this book.

Fletcher, John, I didn’t even realize that was a picture of a game until you two started talking about it. I just grabbed it off of the interwebs!

[…] Black Gate » Black Gate Book Club, Downbelow Station, First Discussion, Second Discussion. Better late than never, here are the opening rounds of the DS discussion (though the third installment seems to be late, too). (Edited to add that Monday’s post appeared later on Wednesday, naturally after I posted. ? Third Discussion.) […]

I have only scanned the latest posts to avoid spoilers. I am about halfway done also. I am enjoying the book, but not feeling compelled to miss meals or work to push through it. Yet. I should also admit that I am totally cheating by reading and re-reading the Wikipedia character list and synopsis as I go through. There is a lot to trudge through here, and I don’t want to miss anything. I will respond more directly to everyone’s thoughts when I am done, hopefully before the final round of discussion is posted. See you then 🙂