The Best of Jack Williamson (1978) was, according to my research, the fifteenth installment in Lester Del Rey’s Classic Science Fiction Series. Frederik Pohl (1919–2013) provided the introduction (his second in the series, he also did the intro for The Best of C. M. Kornbluth). Jack Williamson (1908–2006), who was still living at the time, does the Afterword. The famous sci-fi artist Ralph McQuarrie (1929–2012) provides his first (and only) cover in the series.

Jack Williamson’s writing career spans close to a century! He began professionally writing all the way back in the Hugo Gernsback “scientifiction” pulps, and continued all the way up to and beyond the Star Trek/Star Wars science fiction popularization of the late Twentieth Century. In addition to winning several awards such as the Hugos and Nebulas, the Science Fiction Writers of America named Williamson its second Grand Master in 1976, the first being Robert Heinlein (1907–1988). Also, in 1994 Williamson received a World Fantasy Award for Lifetime Achievement and in 1996 he was part of the inaugural class of inductees into the Science Fiction and Fantasy Hall of Fame. He received various other awards before his death in 2006 at the ripe old age of 98.

Given this long and illustrious career, it beggars no disbelief that the fourteen stories in The Best of Jack Williamson represent over fifty years of his writing. Presented in chronological order, the earliest stories are pure juvenile pulps and progress up through the “New Wave”-ish/Harlan Ellison era to darker themes and more mature stories. Though The Best of Jack Williamson is clearly the work of one science fiction writer, it can also be seen as a sort of panoramic history of science fiction in the Twentieth Century in general. Williamson was diverse but various themes seem to recur. 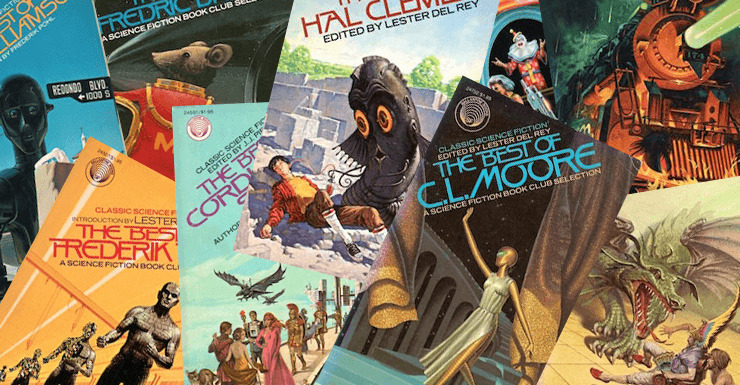 A sample of Del Rey Best of volumes (from James Nicoll’s survey at Tor.com)

For example, the Ralph McQuarrie cover showcases a robot, clearly a reference to one of Williamson’s most well-known stories, “With Folded Hands.” And this theme or trope of robots or androids or manufactured beings comes up in several of Williamson’s stories. In “With Folded Hands” and “Jamboree,” robotic beings are presented as dystopian warnings of the threats involved in technology. But in other stories, such as “Equalizer,” the technology is more utopian, representing the possibilities and hopes that come with progressing science. It’s unsurprising that Williamson says in the afterword that he personally viewed technology as neutral, as something capable of good or evil depending on human intentions. His robotic beings and high-tech bear this out in the panoply of his stories.

As with most older science fiction, the “science” can be a bit dated. But I rarely was taken out of Williamson’s stories with his technological details. His earlier pulp stories suffer a bit more in this regard but the believability of the technology within most of his stories was very plausible.

Williamson also played with darker themes and endings, which explains his 1998 Bram Stoker Award for Lifetime Achievement from the Horror Writers Association, and his 2004 election to Grand Master by the World Horror Convention. Though there is little in The Best of Jack Williamson that really counts as horror, in my humble opinion, Williamson could sometimes strike a very shocking theme or dark ending. 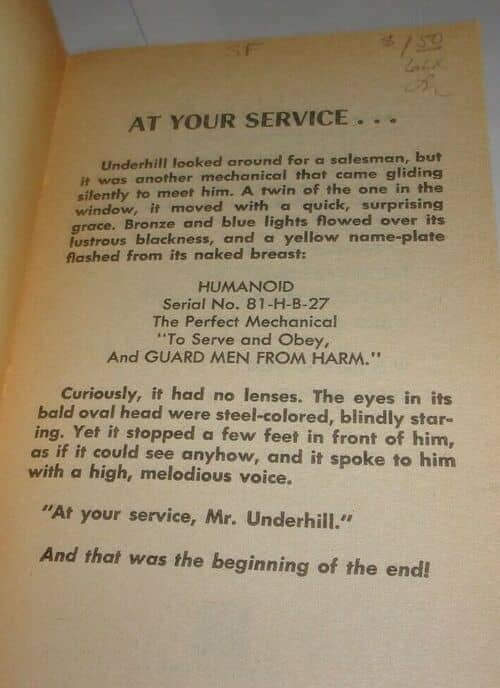 As I mentioned, “With Folded Hands” is one of Williamson’s most reprinted and most well-known stories. Not giving too much away, it’s basically about how the invention of a new line of robots ends up turning life into a true utopia, but the utopia ends up being unbearable — a fairly standard story line in a long sci-fi tradition. The main characters in the story seek to stop these robots. Here’s one spoiler: they fail to do so, though the story feels like it’s going to have a happy and heroic ending. Here is the last paragraph:

The car turned off the shining avenue, taking him back to the quiet splendor of his home. His futile hands clenched and relaxed again, folded on his knees. There was nothing left to do. (p. 206)

What a bummer ending! Yet, as with the best of horror or absurdist or existentialist stories, it really sticks with you long after you finish reading. 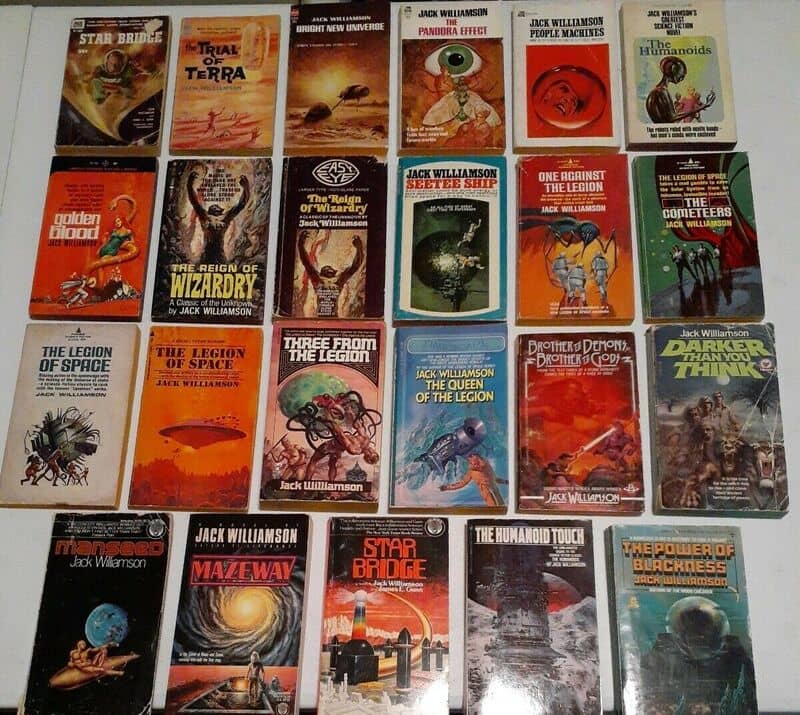 An assortment of Jack Williamson’s SF and fantasy paperbacks

Several other Williamson stories fit this vein. “Jamboree” is like a Logan’s Run with children. Some of the details are quite disturbing. The story “The Happiest Creature” ends with a suicide. And “The Cold Green Eyes,” though having a sort of satisfaction of comeuppance for one hateful character, also ends rather grimly.

These comments might make you think that Jack Williamson was a fairly morose writer. But that would be a premature conclusion. Most of the stories in The Best of Jack Williamson lean more towards classic science fiction with adventure and optimism about the future. “The Highest Dive” is a harrowing exploration adventure on a new planet with a very upbeat ending. “Operation Gravity” is hard-core science fiction, with accurate and clear details about things like parabolic orbits, the mass and gravity of planets and stars, ending with a successful scientific experiment.

The Best of Jack Williamson makes clear why this author’s career successfully spanned so many decades. Though I personally had never heard of Williamson before, I definitely enjoyed the variety of stories and I recommend it to those who enjoy classic science fiction. 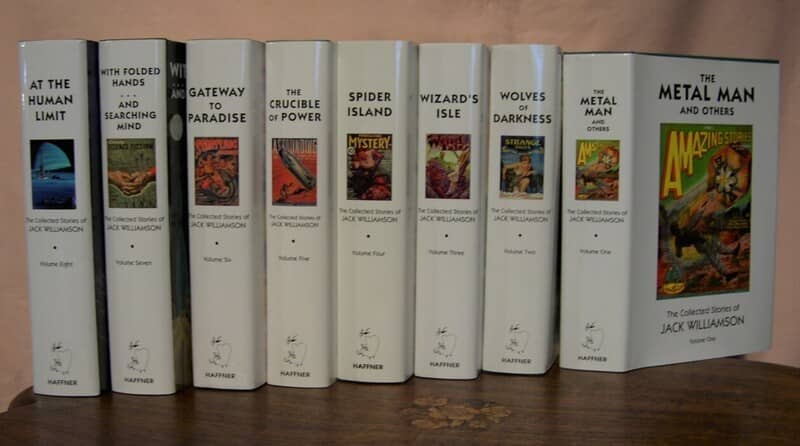 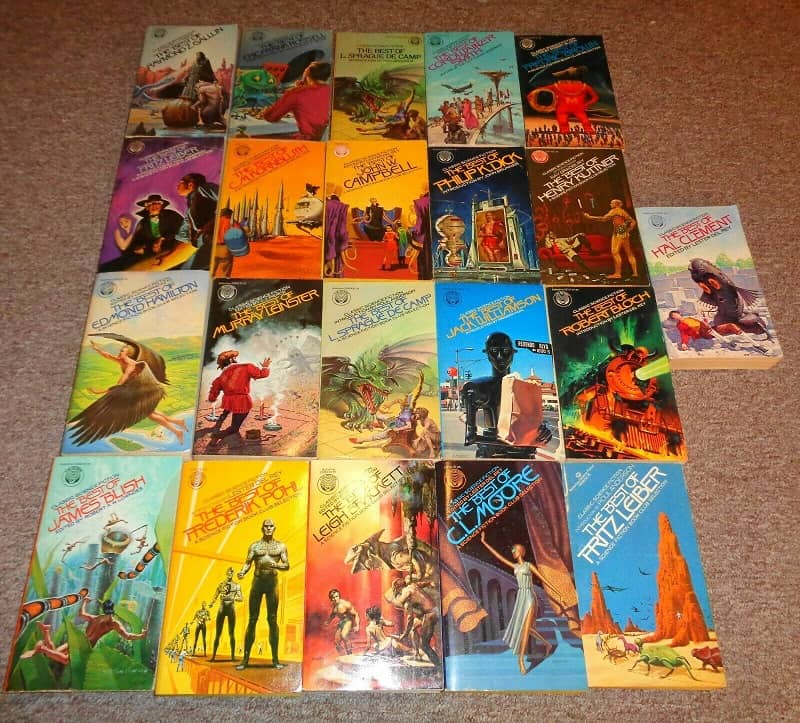 Great post, James. This was one of the very first science fiction books I bought and read that was written for adults. I was in the 7th grade, and up until that time, I had mostly read sf from the children’s section of the school library. I’ve been a Williamson fan ever since. And a fan of the Ballantine Best of serires, going on to track all of them down.

The Ballantine Best of… series introduced me to nearly a dozen new writers, and helped me understand SF as a genre — and appreciate short fiction! I still love finding and collecting these books.

Thanks Keith. In all truthfulness, I don’t find Williamson to be one of the more engaging author in this series. He doesn’t make my top 5, or even my top 10. It is sobering to see how some of these prolific (in their day) authors are being largely forgotten today (it seems to me). That’s a shame. However, I know there is always an ever-growing field of new authors that are begging to be read and appreciated as well.

John, I have to say that one thing these books HAVE definitely instilled in me is a love of good book covers. There’s something about these old paintings that just is not captured by most newer book covers.