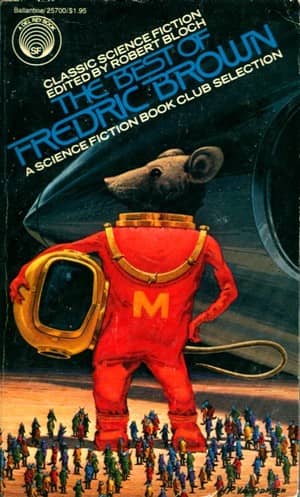 The Best of Fredric Brown (1977) was the tenth installment in Lester Del Rey’s Classic Science Fiction Series. The then living horror author Robert Bloch (1917–1994) gives the introduction. H. R. Van Dongen (1920–2010) returns to do his second cover in the series, having done the cover for the seventh volume in honor of John W. Campbell.

I first heard of Fredric Brown a few years ago here at Black Gate. Our own esteemed editor John O’Neill was reminiscing about this very book. As with so many of John’s Del Rey “Best of” posts, I was intrigued and tracked down a copy. I read through the book and enjoyed many of the stories.

But, my main memory of Brown was primarily one of annoyance.

At that time Brown struck me as an author who often tried to be too cute for his own good. My impression was not helped when I picked up his short novel Martians, Go Home (1954) a few months later. I enjoy a bit of humor in my fiction. But I guess I was not in the mood for something like Hitchhiker’s Guide to the Galaxy at the time.

I also found the twist endings of many of Brown’s short stories to be less than satisfying. So when I started to go through this series for reviews on Black Gate, I was not looking forward to returning to Fredric Brown.

But upon re-reading this volume, I surprisingly found that my prior annoyance had dissipated. What changed?

I am convinced that one’s reading is sometimes greatly affected by the context of one’s life. Perhaps the first time I read The Best of Fredric Brown I just was not in the mood to experience, what the book’s back cover calls, the “Wit and Whimsy of Fredric Brown.” Perhaps I wanted my fiction to be a bit more serious. And perhaps I was living in the post-hangover era of M. Night Shyamalan movie twist-endings. Whatever it was, this go-around was much more enjoyable.

Fredric Brown was a prolific author whose oeuvre of science fiction and mystery spans decades, especially in the 30s, 40s, and 50s. Brown’s biggest and most remembered mark upon sci-fi is probably his short story “Arena”, which became an episode in the original Star Trek series. The actual short story is quite a bit different (and yes, better), but the basic idea survived for television and has long been a favorite of Trekkies. 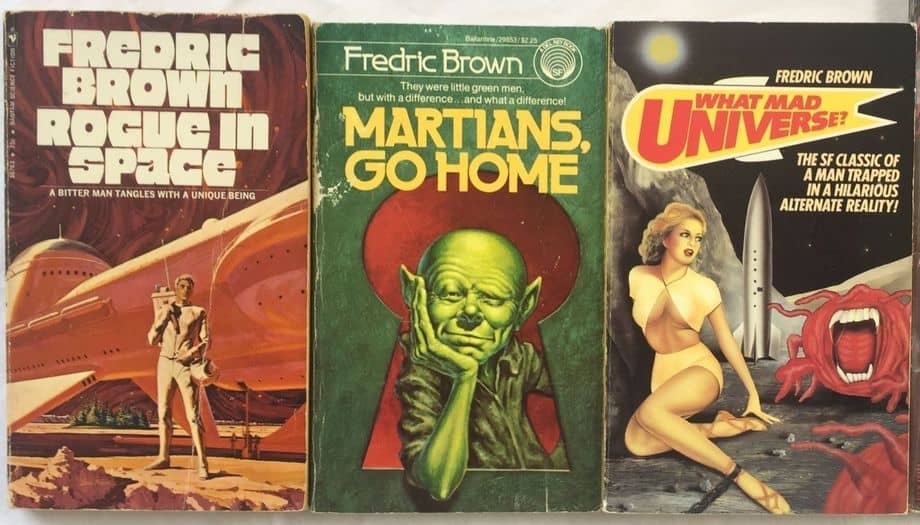 Some of Fredric Brown’s science fiction

As alluded to above, Brown’s creative drollness and humor are foremost, a clear patent in his work. But Brown’s stories also show that he was a very good science fiction writer in the classic tradition, where good technological know-how was often worn on the protagonist’s sleeve. Scientific facts or short scientific explanations are given throughout his works, which give an air of plausibility to whatever science fiction idea is being put forward.

Given these dominant features, I was surprised to find (I don’t remember this from my earlier reading) how many horror elements were in some of Brown’s stories. “Eine Klein Nachtmusik” has a fairly horrific ending and “The Geezenstacks” has a good and slow build up to a fairly chilling denouement. Given that Brown would sometimes publish in Weird Tales, it makes some sense. 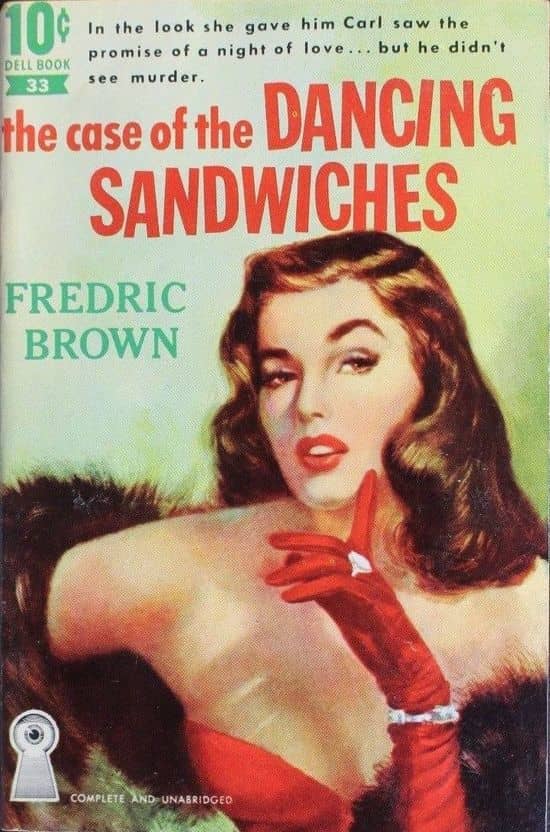 My annoyance with Brown’s humor was sometimes a bit re-ignited reading the overly silly pieces like “Nothing Sirus” where aliens have the ability to materialize human thoughts, leading to some really quacky stuff, and “Abominable” where a mountain climber is kidnapped by an abominable snowman, only to find out that it is actually a snow-woman.

Brown could also be quite poignant and introspective. “Letter to a Phoenix” is sort of an homage to the resilience of the human race while “Come and Go Mad” ends with a sort of meditation on the universe being seen in sort of pantheistic nihilistic way.

But the dominant note throughout this volume is one of wit and play. At his best Brown can be fairly ingenious. In his story “The Yehudi Principle” a character has invented a device that can seemingly produce just about anything. The story begins:

I am going crazy. Charlie Swan is going crazy, too. Maybe more than I am, because it was his dingbat. I mean, he made it and he knew what it was and how it worked.You see, Charlie was just kidding me when he told me it worked on the Yehudi principle, Or he thought he was.

Later in the story the main character has the device produce a story for him. The produced story starts the following way:

I am going crazy. Charlie Swan is going crazy, too. Maybe more than I am, because it was his dingbat. I mean, he made it… (!)

I once saw an interview with Paul Williams where he claimed that it used to be a saying to comment on something strange as “this is like something out of Philip K. Dick.” A teaser clip for the new upcoming third season of Amazon’s adaptation of Philip K. Dick’s The Man In The High Castle has the character Obergruppenführer Smith remarking, when told of the possibility of travel between worlds, that “this is like something out of Fredric Brown.” 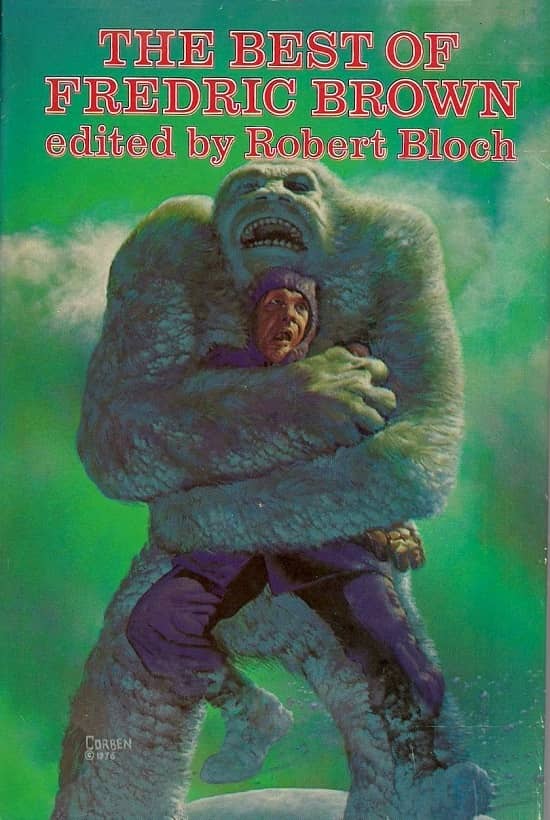 Fredric Brown should not be forgotten. His savvy comedy and his distinctiveness in pushing the so-called “fourth wall” between story and reader should continue to be read. Though Brown clearly is from the tradition of classic science fiction and pulps, he was utterly unique in execution and humor.

Here’s the complete Table of Contents for The Best of Fredric Brown: 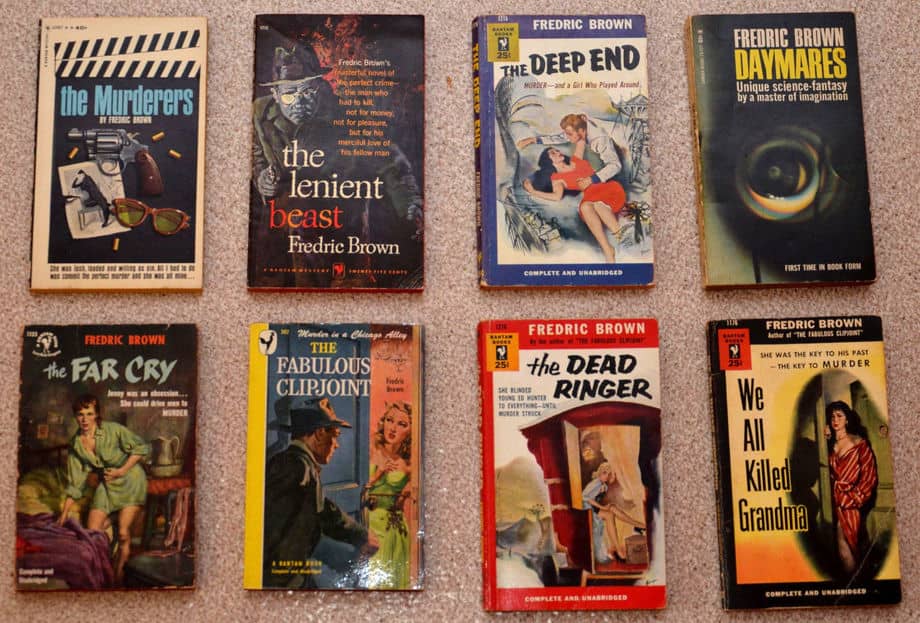 Our previous coverage of Brown includes:

Brown is an all-time great. He indeed produced a lot of utterly weightless stuff, “stories” that were nothing more than extended – or not so extended – puns, but often the short form suited him perfectly and the joke was more than just a punchline, as in his great short-short “Answer.” (Yes – NOW these is a God!) This even applies to his novels – the short version of Martians Go Home that appeared in Astounding is superior to the somewhat padded novel (much as I still love it).

If you like Brown’s SF, you should give his noir mysteries a try. His Name Was Death is an especially good one.

I really love Fredric Brown. It’s strange that I didn’t really discover him until I was nearly 50. Before then, I’d read only a handful of stories.

My favorites are still “Arena” and “Puppet Show.”

NESFA has two huge Fredric Brown volumes out – From These Ashes has the complete short SF, and Martians and Madness has his five SF novels. Greater bargains you’ll never find,

I remember getting in the mail the issue of Astounding Science Fiction with the Martians Go Home cover by Kelly Freas. (It’s on the cover of that Del Rey paperback you show. Stunning, and hilarious. I also really like The Fabulous Clipjoint.

Brown was a masterful writer, and here’s a shout out to the very entertaining What Mad Universe.

Top notch books! I also highly recommend the Haffner Press Fredric Brown Mystery Library. Two volumes out already, and I think more are on the way:

> I remember getting in the mail the issue of Astounding Science Fiction with the Martians Go Home cover by Kelly Freas.

From September 1954? 64 years ago? That’s an impressive memory! I’m a little envious. When did you start reading Astounding?

I only know Brown from his mystery pulp writing. It’s something of an acquired taste for the genre.