In the early 50s, everyone was busy trying to prove how grown up science fiction was. That it wasn’t just kid’s stuff, pulp tales of alien invasions that only appealed to fourteen year-old boys. The earliest genre anthologies on the market — like Groff Conklin’s The Best of Science Fiction (1946) and Healy and McComas’ Adventures in Time and Space (1946) — strained to show the ambitious side of SF, its respect for science and the unique way it examined the future.

In 1953, Fredric Brown and Mack Reynolds decided to take a very different approach, displaying instead the fun side of SF in their classic anthology Science Fiction Carnival. It collected stories showing “a sharply sardonic view of our future” from Murray Leinster, Richard Matheson, William Tenn, Henry Kuttner and C. L. Moore, Eric Frank Russell, and many others. 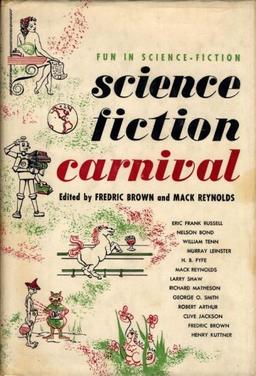 Science Fiction Carnival was published in hardcover by Shasta in December 1953, with a cover by Adri Ames (at right; click for bigger version.)

It was reprinted in paperback by Bantam Books in an abridged version in June 1957. The abridged version (above) dropped William Tenn’s novella “Venus and the Seven Sexes,” and Richard Matheson’s short story “SRL Ad.” The 1957 paperback edition was never reprinted, and has now been out of print for… let me do the math…. very nearly 60 years. Nonetheless, the paperback edition is a very easy find, and copies in good condition start at around $4.50 on eBay and Amazon.

The hardcover version is harder to come across. But when I checked this morning, there was one copy on eBay, with a starting bid of $69.

The complete table of contents of the hardcover edition of Science Fiction Carnival are:

Science Fiction Carnival was published by Shasta in December 1953. It is 315 pages in hardcover, priced at $3.50. The cover is by Adri Ames. It was reprinted in paperback by Bantam Books in an abridged version in June 1957 (175 pages, 35 cents). There is no digital edition.

I have that Bantam edition, and it’s been so long since I read it, I believe it’s not on a shelf, but in a box. But I recognize some of the story titles. You keep digging up these great old paperbacks.

Somebody has to do it!

In a year in which we have a Socialist mounting a credible campaign for President, it is nice to see Mack Reynolds getting some attention, a writer who loved to toss socioeconomic curveballs in his fiction. I would love to know what he and Mr. Brown had to say in their introductions to this collection. Were they acknowledging taking a competing “fun” stance against the sober editors Conklin and Healy/McComas?