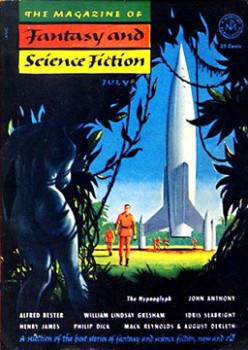 A few weeks ago, I wrote about the best of all Holmes pastiches, August Derleth’s Solar Pons. I mentioned that Pons had a more open-minded view towards the supernatural. This was certainly reflected in four stories that Derleth co-authored with noted science fiction writer Mack Reynolds.

Just last week, John O’Neill wrote a post about Anthony Boucher. As he mentioned, Boucher, along with J. Francis McComas, was the founder of the seminal Magazine of Fantasy & Science Fiction.

In January of 1953, they wrote to Derleth. Reynolds had submitted “The Adventure of the Snitch in Time,” a pastiche in which Sherlock Holmes receives a visitor from an alternate time-space continuum. The editors loved the idea, but, “Unhappily, Mack did not in any sense of the word recreate Holmes, Watson, or Baker Street! Outside of the plot idea, the story was, to be wholly frank, lousy!”

Also, to avoid trouble from those pesky Doyle brothers, none of the characters were named: wholly unsatisfactory.

So, the two editors wrote to Reynolds, suggesting that they have Derleth rework it into a Solar Pons story. Reynolds loved the idea, sending back, “I’d appreciate it if you’d give Augie Derleth first chance at it. It was after reading his Solar Pons stories that I got the idea for Snitch. Besides that, I’m an admirer of the old Seigneur of Sauk City and it would be a privilege to have a story appear under a collaborative by-line…”

Derleth whipped it into shape to everyone’s delight and the story appeared in the July, 1953 issue of Fantasy & Science Fiction. Reynolds had already come up with a second idea, “The Mad Dogs of Tomorrow” (love that title) and the editors gladly accepted another collaboration. 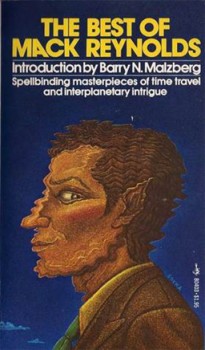 However, there was simply too much other material on hand and the story did not see the light of day until June of 1955, when it appeared as “The Ball of Nostradamus.”

Though Boucher promised that he could publish one Pons story a year, the delay proved fatal: at this rate, it would take twelve years to publish the projected half-dozen stories. As Derleth wrote, “The project, interesting and challenging as it was, was not so much forthrightly abandoned as left to wither away.”

“The Snitch in Time” – Agent Tobias Athelney of the Terra Bureau of Investigation, Planet Terra, of the Solar System League, pops in from the year 2565.

There’s some babble about alternate space-time continuums and we learn that Professor Moriarty is stealing art treasurers, including works by the revered Walt Kelly, creator of Pogo. And Moriarty has obtained Randolph Mason as his counsel.

It’s Elementary – Mason, the creation of Melville Davisson Post in the 1890’s, was a beyond-unscrupulous lawyer. I find him to be a predecessor of Lawrence Block’s Martin Ehrengraff.

Holmes suggests a solution to Athelney’s problem, as well as recommending a young lawyer also named Mason (Perry). The Agent departs, Parker believing he was a lunatic.

This is my least favorite of the four collaborations. There is some clever stuff, but it’s really a parody, rather than a pastiche.

“The Ball of Nostradamus” – A series of child murders have taken place on the Continent, with the last two in London. Pons believes one man is behind it all and gleans his identity from the deathbed ramblings of a dying assassin.

Well-written, dotted with historical figures and posing a morally complex question, this story shows the potential this series had. It’s both a solid science fiction story and a good Pons pastiche. I like the original title (“The Mad Dogs of Tomorrow”) better, but I quite like this tale. 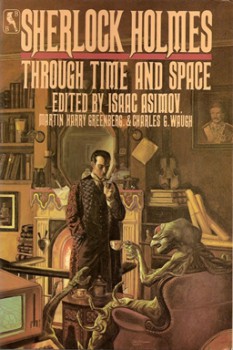 “The Nosferatu” – A client arrives at Praed Street, informing Pons and Parker that he is in London to kill a vampire: a female one. There’s some good supernatural discourse between Pons and Parker and a twist at the end. As with “Nostradamus,” this feels like a genuine Pons pastiche.

As a stand-alone short story, however, it is lacking. Derleth wrote that both he and the editors took “a dim view” of this third story. Really, it reads as if it were the first chapter or two of a novella. And I think it could make a pretty decent one. That’s an idea I’ve given more than a casual thought to…

“The Extra-Terrestrial” – The final story is the best known of the four collaborations and opens with the son of a former client coming to Praed Street. Peter Norwood’s father believes there are aliens (the space variety) in London and is about to leave his fortune to an organization related to that topic. As the sole heir, young Norwood isn’t keen on this plan.

Norwood wants Pons to prepare a detailed report, showing there are no aliens. Though Pons dislikes the son, he takes the case. As with “Ball of Nostradamus,” the science fiction grounding is sound and the Pons elements ring true. It’s an enjoyable story.

The reason I said it’s the best known of the quartet is because it became a Sherlock Holmes tale! In 1965, Reynolds significantly rewrote it, swapped out Pons for an all but senile Holmes (and a rude Watson) and published it in Analog. I first encountered this version in Isaac Asimov’s Sherlock Holmes Through Time and Space. This latter version is significantly longer, but I don’t particularly care for the depiction of Holmes and Watson.

The first two tales were included in Derleth’s gem, A Praed Street Dossier, with a very short essay about them. He mentioned the unpublished stories, but didn’t even include their names.

All four stories are in The Final Adventures of Solar Pons, including a more detailed essay by Pons expert Peter Ruber.

Boucher was quite a Pons fan, even writing the introduction to The Reminiscences of Solar Pons. And Reynolds was a name of note in the science fiction field. I’m a bit surprised that the editor couldn’t find space for the stories a bit quicker, quite possibly keeping the authors’ interest alive in the project. I certainly would have liked to see more from Derleth and Reynolds.

Boucher was a giant in the fantasy/science fiction/mystery fields and the leading mystery convention, Bouchercon, is named in his honor. I reprinted William Nolan’s essay, “Who Was Anthony Boucher?” in a Solar Pons Gazette. Give it a click.

‘Porlock,’ of course, was the name of Sherlock Holmes’ informant working in Moriarty’s organization in The Valley of Fear. Most intriguing…

Somebody should write a post here about Mack Reynolds. I’m not familiar enough with his non-Pons stories to do it myself. But he’s quite an accomplished author from the golden age of sci-fi.

It’s strange that Mack Reynolds is so forgotten. He was very prolific, and widely read.

Most of what he did was science fiction, though. Did he write any fantasy?

I don’t think that Reynolds wrote any fantasy; though a couple of romance/sex novels.

He sure did crank out a lot of sci fi before he fell out of favor.

Solar Pons – I named this blog after him | Almost Holmes

[…] Another Black Gate post I wrote looked at the four science fiction Pons tales that Derleth wrote with Mack Reynolds and I think it’s worth a read. […]