If you have a book you’d like me to review, please see the submission guidelines here. I’ve run short on books that I’ve received in the past year, so anything new has a good chance of being reviewed. I won’t be posting a review in January, since I’ll be spending time with my family over Christmas, and not at all because I’ll be too busy playing Dragon Age: Inquisition. 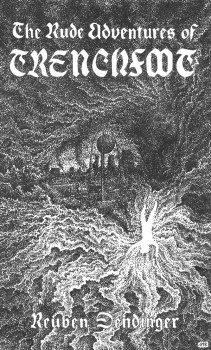 I’ve been doing these reviews for the past two years, and this is the first time I’ve had a paperback to review. It’s been a while since I’ve read a paperback of any sort. I’ve grown used to e-books, so it was something of a novelty to read an actual physical copy of The Rude Adventures of Trenchfoot by Reuben Dendinger.

The Rude Adventures of Trenchfoot is described by its author as quasi-satire. That may be underselling the satire somewhat. Whether it’s the horse that chews its way through miles of dirt, the three young men that overload a virility draining machine through the sheer power of their manliness, or the magical fusion of two half-dead people into one fully living and one fully dead person, this is not a book that takes itself too seriously. I may have classed it more as parody than satire, a mocking take on gritty sword and sorcery, with perhaps a bit more grit than you really want.

The hero, Trenchfoot, was born full-grown from the union of the night and the earth, with a destiny to travel from the south pole of his birthplace to the equator and decide the nature of the Cosmic Night. The Cosmic Day of the past 500,000 years is coming to an end, and order must give way to chaos, but whether that will be the (relatively) benign chaos of lunacy or the hellish chaos of nihilism has yet to be decided. That is Trenchfoot’s role.

He is joined on his adventures by his male lover the swordsman Cass, his female lover Hyppa, and the scholar and astronomer Thexeded, who foresees the impending collapse of order and civilization and is all for it. Also joining him is the dirt-eating and wine-drinking horse, Oar, born like Trenchfoot from the night and the earth—who’ve apparently had a lot of children, among them inanimate objects, prophecies, and animals, but no humans before Trenchfoot.

Thexeded was my favorite of these characters. You might expect someone who’s studied patterns and prophecies his entire life might be put out that these things were coming to an end, but he seems to have embraced the chaos of the new age enthusiastically. Hyca, the androgynous merging of Hyppa and Cass, had a lot of potential, but I didn’t feel that s/he lived up to it. I expected a bit more of an identity crisis and a bit of soul-searching, rather than going right back to being Trenchfoot’s lover. As for Trenchfoot himself, he felt a little too passive. He was, after all, technically a newborn, and didn’t know what was going on, so for the most part he let himself be led around, whether by prophecy, madmen, or Thexeded. I never felt like he really decided whether he believed in his quest. He had a prophecy that he was born to fulfill, and he was going to do it. I would have liked to see him struggle with that idea a bit more, and perhaps break with it.

The rude part of the title could be taken a couple of different ways. There’s a lot of crudity in the book—in the language, the sex, the river of raw sewage. Or it could refer to Trenchfoot himself. He is not a noble hero on a quest to right wrongs. He is a harbinger of chaos, and he kills a lot of people and destroys a lot of stuff. Some of them clearly deserve it, such as the priests of Kople and the bandits, but others are guardsmen and knights just doing their jobs and trying to prevent Trenchfoot from doing as he pleases. The escape from Sap-Lamine is particularly disturbing, as it resembles nothing so much as a bank robbery followed by a shootout and car-chase with the cops (just with swords and horses instead of guns and cars). In case you haven’t guessed, our protagonists are the robbers in this analogy. The novel doesn’t argue that Trenchfoot is right or justified, but rather that right and wrong are becoming meaningless as the Cosmic Day dissolves into Cosmic Night. It helps to remember that the book is satirical.

There’s a lot of humorous passages in the novel, some of which works better than others. I particularly like when Trenchfoot and Thexeded are debating, while trapped on a river of sewage, whether to eat Trenchfoot’s horse, before remembering that they left the horse behind in Kople. Sometimes the jokes seem a bit jarring and out of place, but I would argue that the book could have used more rather than less humor.

It’s a short book, only about 50,000 words, and it wraps up much more quickly than I expected. The ending is appropriate, though, even if it is not as exciting as I would have liked.

The Rude Adventures of Trenchfoot can be purchased for $9 from Magic Sword Press.