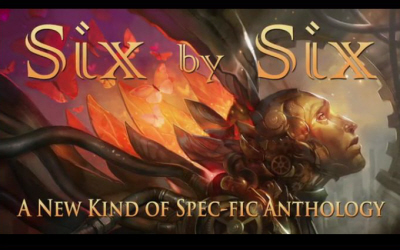 Long time readers will remember Martha Wells’s Cineth stories, “Holy Places,” “Houses of the Dead,” and “Reflections,” which first appeared in Black Gate 10, 11, and 12. They were some of the most popular stories we every published, and they helped put Black Gate on the map.

All three stories feature her characters Giliead and Ilias. “Holy Places” was reprinted in Lightspeed magazine, but the others have never been reprinted — although I’m often asked when they might be available in a more permanent edition. So I was very pleased to hear the following news from Martha this week:

I’m involved in a kickstarter this month… It’s short story collections by six different authors (me, Tina Connolly, Brenda Cooper, Stephen Gaskell, Bradley P. Beaulieu, and Will McIntosh) with reprints and some stories original to the collection. The new short story I’ll have in it is a Nicholas and Reynard story set before The Death of the Necromancer, called “Night at the Opera,” so I thought some Black Gate readers might be interested.

We serialized Martha’s complete novel The Death of the Necromancer here.

We frequently hear about publishing Kickstarter projects, but this one looks very special indeed. Six by Six brings together six terrific fantasy and SF authors, each of whom contributes six stories, for 36 stories in all — including all three Giliead and Ilias tales from Black Gate magazine.

Six by Six is a one-time offering, never to be offered again in a single package. Each collection will be published DRM-free and in multiple digital formats, including EPUB, MOBI, and PDF versions. There are also special backer rewards that include signed books, limited edition hardcovers, and other perks.

“Holy Places” — Ilias is abandoned by the Finan family and finds Andrien, just as the house is attacked. “Holy Places” first appeared in Black Gate 11, August 2007.

“Rites of Passage” – -Most people in Cineth believe Giliead is too young to take up the duties of a Chosen Vessel, but he may not have a choice. “Rites of Passage” first appeared on MarthaWells.com in April 2014.

Check out the Six by Six Kickstarter here. The campaign runs until Dec 31 and is already more than halfway to its $6,000 goal. Art by Julie Dillon.

I am so there!

[…] Ile-Rien and Cineth Stories, one of the first of six anthologies to be funded by the successful Six by Six Kickstarter in December, is now available. It contains “Holy Places,” “Houses of the Dead,” […]