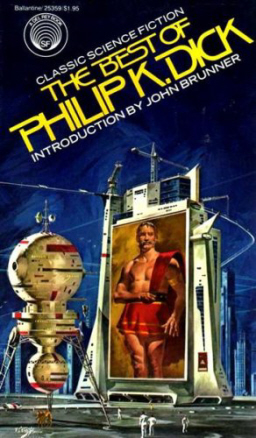 I didn’t know anything about Philip K. Dick when The Best of Philip K. Dick was released in 1977. That was the year Star Wars came out and I was more interested in trying to make a light saber out of my sister’s hair dryer.

I wasn’t alone (about Dick, not my obsession with my sister’s hair dryer). Philip K. Dick was a midlist paperback science fiction writer in the mid-70s, with few awards and only a handful of successful novels to his name, largely unknown except inside the genre. As Robert Silverberg observed in his famous comments on full-time SF writers, “Phil Dick was a full-timer, but lived at the poverty level.”

Dick was an unusual choice for Lester del Rey’s Classics of Science Fiction line for another reason. If you’ve been following the entries so far (see below for a complete list of the titles we’ve covered), you know that a typical volume consists of long out-of-print pulp stories by a writer who later achieved some measure of fame, usually for their novels.

By contract, the earliest story in The Best of Philip K. Dick, “Beyond Lie the Wub,” originally appeared in 1952. He’d barely been published for two decades by the time this book arrived, which didn’t fit the profile of Del Rey’s other choices at all. In fact, in many ways Dick was the most contemporary subject Del Rey chose for his select line of collections.

I can only conclude that Del Rey saw something special in Dick’s short stories. He wasn’t the only one, either — by the late 70s, the brilliant work being done by Dick at short length was becoming obvious to his fellow writers, even if wider recognition still eluded him. The blurbs on the inside cover reflect this. Here’s Norman Spinrad:

He has produced the most significant body of work of any science-fiction writer.

There’s something about ordinary reality that causes it to go all shimmery in the presence of Philip K. Dick… [his fans believe he] is now on the edge of a popularity surge similar to what happened to Kurt Vonnegut in the late Sixties.

Prophetic words. Of the roughly two dozen writers Del Rey showcased in the Classics of Science Fiction line, I think it’s safe to say that none experienced the surge in popularity Dick did over the next two decades. 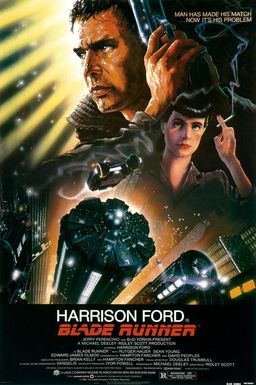 One thing’s for sure: while many still have a handful of their most popular works in print, over three decades after these collections appeared, Dick is unique in that virtually his entire body of work is still available and still being read today.

In 1974 came Flow My Tears, The Policeman Said, the tale of television celebrity Jason Taverner, who awakens in a parallel universe where he is unknown. It was nominated for a Nebula, Hugo, and Locus Award, but won only the John W. Campbell Award. In 1997, A Scanner Darkly was nominated for the Campbell, and won the British Science Fiction Award that year.

Blade Runner was based on Dick’s 1968 Nebula nominee Do Androids Dream of Electric Sheep? It was directed by Ridley Scott (Alien) and stared Harrison Ford, hot off the blockbuster success of Raiders of the Lost Ark.

Despite everything it had going for it — including a big budget and stunning visual design — Blade Runner wasn’t a commercial success. It was trounced at that box office that summer by The Thing, Star Trek II: The Wrath of Khan, and especially E.T. the Extra-Terrestrial.

But it has since become recognized as one of the true classics of SF cinema. It won the Hugo Award for Best Dramatic Presentation and a Special Achievement Award from the London Critics Circle Film Awards. It currently has a 91% rating at Rotten Tomatoes.

That was only the beginning. After Blade Runner, Dick achieved the kind of fame that most SF writers can only dream of. Once Hollywood got a taste of the mind-bending imagination of Philip K. Dick, there was no turning back. 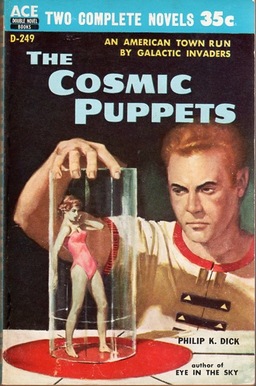 Today, Philip K. Dick is one of the most recognized names in science fiction. Arguably, he is more famous and recognizable than any of the “big three” who dominated SF in the late 20th Century: Arthur C. Clarke, Isaac Asimov, and Robert E. Heinlein. He has nearly as many novels in print today as Asimov and Clarke combined.

In 2005, Time magazine named his 1969 novel Ubik one of the one-hundred greatest English-language novels published since 1923. He was the first science fiction writer to be included in the prestigious Library of America series, with three omnibus volumes edited by Jonathan Lethem.

Sadly, Dick didn’t live to enjoy this late flowering of his career. He died of a stroke on March 2, 1982, at the age of 53. He never saw the release of Blade Runner, although he did see some of the production stills and set design.

His later novels — including Counter-Clock World (1967), Ubik (1969), We Can Build You (1972), Flow My Tears, The Policeman Said (1974), A Scanner Darkly (1977), and Radio Free Albemuth (1985) — appeared from a wide range of publishers and won him an increasing audience for their daring and diversity, as well as his continued fascination with human identity and the concept of free will.

I have a checkered history with Philip K. Dick. I read much of his major work, of course, but my most memorable experiences with him have been as a bookseller. Including that time at Dragon*con when a lovely young woman wandered by the Black Gate booth and picked up a paperback copy of Eye in the Sky. 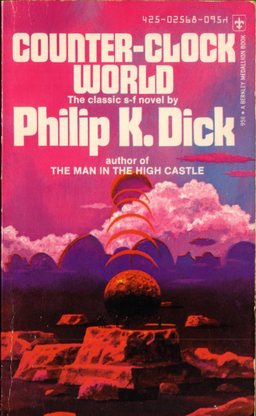 There’s no innocent way to ask a woman if she likes Dick. She dropped the book and bolted. She vanished quickly enough, but it was a looong time before the laughter from the booksellers around me died down. For the next three days, whenever there was a quiet moment in the booth someone would mutter, “Do you like Dick?” and everyone would burst out laughing again.

Philip K. Dick taught me a lot about book collecting — and not just how to phrase my questions more delicately. His earliest paperbacks — especially his Ace Doubles — command extraordinary prices in the collector’s market, as I wrote about after my experience selling Dick paperbacks at the Printer’s Row book fair in 2011. (You can read about it in my article Selling Philp K. Dick.)

In describing his stories — which question the very nature of reality, and especially the truth of human existence — Dick famously said:

The Best of Philip K. Dick collects 19 stories published between 1952 and 1974. The introduction was by John Brunner and he encapsulated the prophetic nature of much of Dick’s work, and its enduring appeal to critics, when he said:

[Dick is] the most consistently brilliant science-fiction writer in the world… But I tell you this straight up: I do not want to live in the sort of world Dick is good at describing… Maybe if a lot of people read Dick’s works I’ll stand a better chance of not living in that world.

The book contains “Second Variety” (basis for the movie Screamers), “Paycheck” (adapted as the Ben Affleck film Paycheck), and many other classic tales, including “Oh, To Be a Bobel!” and “A Little Something For Us Tempunaunts.”

Here’s the back cover, with Lester Del Rey’s story descriptions: 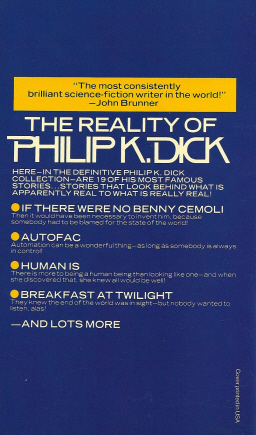 The distinctive cover is by Vincent di Fate.

Dick provided the “Afterthoughts,” which is filled with insightful and amusing anecdotes and commentary:

As to what the stories in this collection mean, I will not cite the usual copout that the story must speak for itself, but rather the copout that I don’t really know… One time a whole class of kids wrote me about my story “The Father-thing,” and every kid wanted to know where I got my idea. That was easy, because it was based on childhood memories of my father; but later on, in re-reading my answers, I noticed that I never said the same thing twice. With all intent at honesty, I gave each kid a different answer. I guess this is what makes a fiction writer…

So now, briefly, to consider these stories themselves. “Beyond Lies the Wub”: My first published story, in the most lurid of all pulp magazines on the stands at the time, Planet Stories. As I carried four copies into the record store where I worked, a customer gazed at me and them, with dismay, and said, “Phil, you read that kind of stuff?” I had to admit I not only read it, I wrote it…

“Second Variety”: My grand theme — who is human and who only appears (masquerades) as a human? — emerges most fully. Until we can individually and collectively be certain of the answer to this question, we face what is, in my view, the most serious problem possible. Without answering it adequately, we cannot even be certain of our own selves. I cannot even know myself, let alone you. So I keep working on this theme; to me nothing else is as important a question. And the answer comes very hard.

The Best of Philip K. Dick was published by Ballantine Books in March 1977. It is 450 pages and was priced at $1.95. There is no digital edition.

The last volume we covered was The Best of John W. Campbell. So far we’ve covered the following volumes in the Classics of Science Fiction line (in order of publication):

I think this was one of the hardest volumes in this series to find, if not the hardest. It’s also the one I’ve seen the fewest copies of over the years.

I loved the paranoia in some of the stories in this volume. While I’ve not read a great many of Dick’s novels, I’ve enjoyed most of the ones I have. Still, I think I enjoy his short work more.

Dick is absolutely one of the most collectible SF authors. Since a lot of his work appeared first in paperback, there’s a lot of rare book collectors who usually ignore paperbacks out there, snapping up paperback copies of his early novels.

Still, while some of Dick’s books are becoming scarce, there’s still generally a good supply. I’ve had no trouble buying lots containing some of his most sought-after titles for very reasonable prices, and I think that’s part of what’s kept the market from getting too hot. For example, copies of THE BEST OF PHILIP K. DICK are available on Amazon in good condition for $11 and up… not bad at all for a 35-year old paperback.

That’s much better than, say, the Hal Clement or James Blish volumes (both of which start at a penny), but still behind THE BEST OF JOHN W. CAMPBELL, which starts at around $13.

I have about half a dozen of his early Ace paperbacks, and I’m hanging on to them.

[…] last volume we covered was The Best of Philip K. Dick. So far we’ve covered the following volumes in the Classics of Science Fiction line (in […]