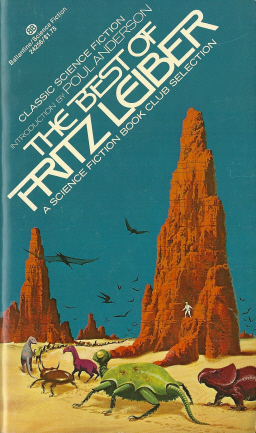 And so we come to Fritz Leiber, in our continuing exploration of Lester del Rey’s Classic Library of Science Fiction series.

The Best of Fritz Leiber, published in 1974, was the second in the line, following The Best of Stanley G. Weinbaum. Unlike Weinbaum and many of the authors who would follow him, Leiber was well known — even a star — to contemporary SF readers in 1974, thanks chiefly to his popular Fafhrd and the Gray Mouser books.

Which brings us conveniently to the book’s first problem. Those stories were being published by Ace Books, who had five volumes of Fafhrd and the Gray Mouser in print by 1970, and the Classic Library of Science Fiction line was owned by Ballantine, which meant The Best of Fritz Leiber couldn’t include any of them. This is sort of like assembling a Best of Robert E. Howard collection that ignores Conan (which Del Rey books did in 2007, with considerable success, now that I think about it.)

Poul Anderson acknowledges this painful lack in his introduction, taking a moment to badmouth sword & sorcery while he’s at it:

It’s too bad that we have no tale of Fafhrd and the Gray Mouser here. Not only did that charming pair of rogues… launch the author’s career, they are still going strong, to the joy of everyone who appreciates a rattling good fantasy adventure. But by no means are these stories conventional “sword and sorcery.” The world of Nehwon is made real in wondrously imagined detail… Here Leiber in his way — like the late J.R.R. Tolkien in his, and not vastly different — has done, and is doing, for the heroic fantasy what Robert Louis Stevenson did for the pirate yarn: by originality and sheer writing genius, he revived an ossified genre and started it off on a fresh path.

I could likewise wish that this book held a sample or two of Leiber’s horror stories. In my opinion, which Fritz modestly does not share, Lovecraft and Poe himself never dealt out comparable chills.

In other words, Leiber’s stories (and Tolkien’s) are good, so they can’t really be sword and sorcery… despite the fact that Fritz Leiber is often credited with coining the phrase “sword & sorcery” to describe his most popular work. Poul Anderson. What a doofus.

In addition to the omissions already noted, the book is also missing a handful of Leiber’s most famous tales, including “The Girl With the Hungry Eyes,” and two Hugo winners: the novella “Ship of Shadows” (1969), presumably excluded for reasons of length, and the short story “Catch That Zeppelin!”, first published a year after the book appeared in 1975, which at least makes this one easily to forgive.

Regardless of Anderson’s clunky intro and the lack of Fafhrd, the Mouser, and Leiber’s best horror stories (the rights to which presumably were tied up in another of Leiber’s many collections — possibly The Book of Fritz Leiber, which came out the same year from DAW), The Best of Fritz Leiber is still a terrific collection, a testament to the strength of Leiber’s catalog.

It includes the bulk of his most well-known stories, including “Gonna Roll the Bones” (1967) the Hugo and Nebula award-winning tale of Joe Slattermill’s fateful crap game with the devil; the creepy “A Pail of Air” (1951), which tells of the last living family on Earth after most of the planet’s atmosphere has frozen — and the strange things that begin to appear when the world becomes completely still; as well as “Coming Attraction” (1950), “Poor Superman” (1951), “Space-Time for Springers” (1958), and many others.

It also contains an Afterword by Leiber, in which he briefly discusses each of the selections.

The Best of Fritz Leiber had another notable difference from the Weinbaum volume: it was the first in the series to proudly proclaim “A Science Fiction Book Club Selection” on the cover.

I assume this was part of a marketing agreement Ballantine had with Doubleday, who created the SFBC in 1953. As a result, the SFBC began publishing hardcover first editions of many of the Classic Library of Science Fiction, most with new covers.

Book club editions are rarely collectible, generally because of their reprint status and budget production values, but there’s brisk interest among collectors for many of those volumes — possibly because of their first edition status, or the variant cover art. I admit I enjoy having the hardcover editions myself, as that’s how I originally read them, reclining in the trailer our family had in our backyard in Ottawa, Ontario.

The Book of Fritz Leiber won the 1975 Locus Poll Award for Best Single Author Collection of the year, which must have pleased Lester del Rey. Following on the success of the Weinbaum volume, it clearly fueled Del Rey’s ambitions to expand the scope of the series.

Not that he needed much encouragement. The first printing of The Best of Fritz Leiber contained this modest claim from the publishers, filling page two:

Look for Ballantine’s landmark series of definitive collections
by the masters of science fiction. Each book will be introduced
by a distinguished science-fiction writer or critic.

Now available in a Ballantine Edition

The Best of Henry Kuttner
Introduction by Ray Bradbury

The Best of Frederik Pohl
Introduction by Lester del Rey

The Best of Cordwainer Smith
Introduction by J.J. Pierce

The Best of C.L. Moore
Introduction by Lester del Rey

One thing that sticks out at me on that list is that Del Rey chose to do the intros to the Pohl and Moore books himself. Wonder why, when he clearly took such pride in getting other noted writers to do the intros for the others.

Budget issues, maybe? Or perhaps he simply had something especially pressing to say in those cases? We’ll have to see when we get there.

In any case, Del Rey’s ambition to assemble “definitive collections” of the most important SF writers of the age was clearly on display. While one might quibble with the “definitive” label in Leiber’s case — given the rather glaring omissions — there’s no denying that Del Rey accomplished what he set out to do. 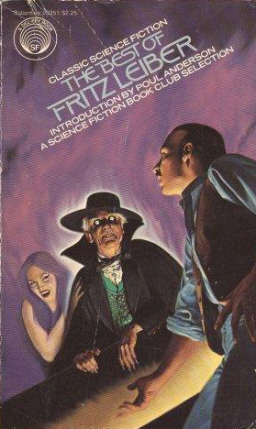 Here’s the back cover copy, which further drove home the point:

First there was The Best of Stanley G. Weinbaum…

“Weinbaum’s tales have… a carefree, devil-take-it-all attitude which is, quite plainly, irresistible. Science fiction aficionados and historians will welcome this collection.”  — Bestsellers

And Now There is The Best of Fritz Leiber…

The second volume in Ballantine’s critically acclaimed Classic Library of Science Fiction — big, definitive collections by the top authors in the field.

Now — in one superlative volume — 22 super science-fiction tales by a master storyteller.

Plus 16 more fabulous stories — including the award-winning “Gonna Roll the Bones,” the tale of a man who shoots craps with the devil!

By the late 70s, Ballantine refreshed the cover on the paperback edition, replacing Dean Ellis’ enigmatic desertscape with a much darker painting by Michael Herring, illustrating the most famous story in the collection, “Gonna Roll the Bones.”

The Best of Fritz Leiber was published in November, 1974 by Ballantine Books. It is 329 pages in paperback, originally priced at $1.75. It is out of print. There is no digital edition.

The last volume in the Classic Library of Science Fiction we examined was The Best of Edmond Hamilton. So far we’ve covered (in order of publication):

This is a great addition to this series, although I would hardly call the book definitive, for the reasons you mention. The problem I have with Best of collections for living authors, at least ones who are still actively writing, is that they can’t be definitive. I always add a “So Far” to the title in my head. The new work an author produces should be at least as good as the old, hopefully better, at least ideally. Sadly that’s not always the case.

And in the case of a writer like Leiber, it’s hard to have a one-volume definitive collection, at least in the sizes mass market tends to limit publishers to. Still, it’s been too long since I read much Leiber. Thanks for the reminder to read some more of his work.

Also, not to pick nits, but I believe the Del Rey Best of REH had two Conan stories in each volume. That was an editorially imposed limit, IIRC.

Can I assume you’ve read Poul Anderson’s essay “On Thud and Blunder?” That at least provides you with some context for his remarks, for what it is worth.

I agree, Ken. Poul wasn’t belittling “conventional” s&s so much as he was touting Leiber’s enhancing and broadening it in a new direction. Anderson, remember, wrote his fair share of “conventional” s&s. Earlier today, after reading John’s intro to the book, I leaned within arm’s reach to the nearest bookshelf and plucked Thieves’ World #1 from it and found a story by Poul right there in the ToC.

“On Thud and Blunder” is one of the seminal essays practitioners should read. It’s not very long.

I think John was just maybe in an ornery mood this morning or something. 🙂

> The problem I have with Best of collections for living authors, at least
> ones who are still actively writing, is that they can’t be definitive… And in
> the case of a writer like Leiber, it’s hard to have a one-volume definitive
> collection, at least in the sizes mass market tends to limit publishers to.

Right you are. A few years back Night Shade took a run at a definitive Best Of volume, Selected Stories by Fritz Leiber, a 400-page hardcover. I’ll have to compare the two in a post some day…

> Also, not to pick nits, but I believe the Del Rey Best of REH had two Conan stories in each volume.

Right again! I should have double-checked the TOCs. 🙂

> Can I assume you’ve read Poul Anderson’s essay “On Thud and Blunder?” That at
> least provides you with some context for his remarks, for what it is worth.

I have, but it was a long time ago.

> Poul wasn’t belittling “conventional” s&s so much as he was touting Leiber’s
> enhancing and broadening it in a new direction.

You’re probably right. I just got a little cranky when I saw Poul calling sword & sorcery “an ossified genre” — and then taking pains to say Fritz Leiber wasn’t writing S&S at all, that he was much better than that.

I know Poul wrote some great heroic fantasy himself, but that whole retconning of Leiber’s classic S&S work kinda annoyed me.

I think Anderson makes a good point about the 40s and 50s. There were some decent stories in that timeframe but it appears to me as a trough between two great eras for the genre.

If you’re talking about S&S in the 40s and 50s… yeah, that was a pretty lean time. In fact, I tried to come up with some counterexamples, and totally failed!

I’m sure there are several I’m overlooking, but your point is made.

[…] last volume in the Classic Library of Science Fiction we examined was The Best of Fritz Leiber. So far we’ve covered (in order of […]

[…] Brian Aldiss, Gordon Dickson, and Poul Anderson. (Sharp-eyed readers will notice that Del Rey had a Leiber title as well — making Fritz Leiber the only author with volumes in multiple series. One of the […]