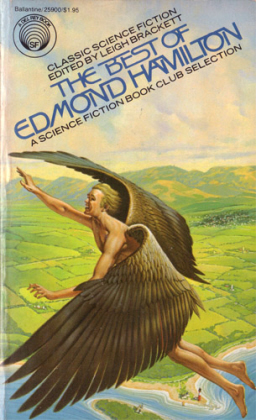 Edmond Hamilton is my favorite pulp writer and he has been since I read the chilling short story “The Man Who Evolved” in Before the Golden Age. (Read the complete story online at The Nostalgia League.)

That’s a long time, especially considering how many pulp tales I’ve read in the intervening years. But Hamilton had a lengthy and productive career — he was one of the few writers to survive both the coming of Campbell, who ushered in the Golden Age of Science Fiction, and the death of pulps more than a decade later.

Hamilton’s first published story, “The Monster-God of Mamurth,” appeared in the August 1926 issue of Weird Tales. It was a fully realized tale of eldritch horror, following the exploits of a group of explorers who discover a legendary lost city in the desert and the sinister spider-things who inhabit it still.

When we began including reprints in the print version of Black Gate, “The Monster-God of Mamurth” was the second one we chose, and it appeared in BG 2, with all-original art by Allen Koszowski (see one of the magnificently creepy illos he did for us here).

Hamilton quickly became one of Weird Tales‘ most popular and prolific writers, appearing alongside H. P. Lovecraft and Robert E. Howard. All told he sold 79 stories to Farnsworth Wright and the magazine’s later editors between 1926 and 1948; only Seabury Quinn and August Derleth appeared more often in the magazine’s pages.

According to his ISFDB page, Hamilton wrote exactly 200 short stories for the magazines between 1926 and his death in 1977. He appeared in virtually all the science fiction and fantasy pulps, including Air Wonder Stories, Wonder Stories, Thrilling Wonder, Super Science Stories, Amazing Stories, Fantastic Science Fiction, and many others.

Hamilton has been reprinted numerous times — his first collection, The Horror on The Asteroid and Other Tales of Planetary Horror (1936), is often credited as the first hardcover SF compilation — but collecting his best and most popular early work has frequently been frustrating. 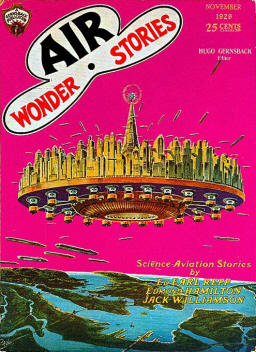 Here’s Asimov from Before the Golden Age, the book that introduced me to Hamilton:

The earliest serial I remember reading and slavering joyously over was Cities in the Air, by Edmond Hamilton, which ran in two parts in Air Wonder Stories, in the November and December 1929 issues. I still remember the dramatic Paul cover illustration for that serial, with skyscraper cities shown on huge circular slabs in mid-air.

The next serial I remember is The Universe Wreckers, a three-parter in Amazing Stories, in the May, June and July 1930 issues. This one was also by Edmond Hamilton. Considering that, and the fact that Ed is the best-represented in this anthology (three stories) of any of the authors included, I can only deduce that Ed was my favorite author in those very early days…

These stories, which are full-length novels, can’t be included, alas, in this anthology, which is restricted to stories of fewer than forty thousand words.

Hamilton began working for DC comics in 1946, contributing primarily to Superman, Batman, and The Legion of Super-Heroes. He wrote only a handful of stories for the magazines after about 1959 and began to focus on novels, including his ongoing Captain Future serials and especially The Star of Life (1959), The Haunted Stars (1960), Battle for the Stars (1961), The Valley of Creation (1964), and many others.

The Best of Edmond Hamilton, which collects science fiction and fantasy published between 1926 and 1968, was edited by his wife, Leigh Brackett. While Hamilton was one of the most celebrated and prolific SF writers of the early 20th Century, his fame was gradually eclipsed by his wife, whose science fantasy tales — especially for Planet Stories — remain popular (and in print!) today. 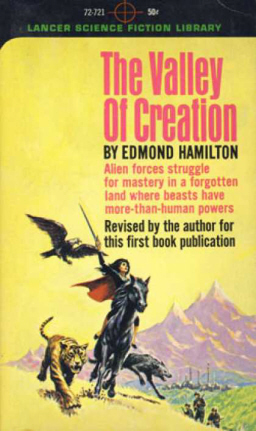 Brackett selected a generous sample — 21 stories — of her husband’s finest work for The Best of Edmond Hamilton. Here’s the back cover text.

The Grandeur of Edmond Hamilton

These 21 superb stories display the full cosmic scope of a writer whose epics of galactic adventure on the heroic scale have enthralled generations of science fiction readers with their conflicts of men, strange beings, and entire planets.

“Thundering Worlds”
Fleeing a dying sun, mankind set out across space — not in starships but in an incredible armada made up of the very planets of the solar system!

“The Man Who Evolved”
He harnessed the energy of the Universe to reach man’s next, godlike stage — and them took the step after that.

“In the World’s Dusk”
The last survivor of the human race brought back the dead to people Earth — and, when that failed, tried an even more desperate way of making his planet live again.

“Exile”
He created a barbaric, nightmarish world — and then he had to live in it!

“Day of Judgment”
The last man and the last woman returned to Earth — to face a jury with a million-year grievance to avenge!

Plus the unforgettable “Requiem,” and fifteen other unique tales alive with a surging sense of wonder.

The Best of Edmond Hamilton was part of Lester del Rey’s ambitious Classics of Science Fiction line. So far we’ve covered the following volumes (in order of original publication):

The Best of Edmond Hamilton was published in August 1977 by Del Rey. It is 381 pages, with an original price of $1.95. It includes an introduction by Leigh Brackett and an Afterword written by Hamilton, less than a year before his death.

It was preceded by a Science Fiction Book Club hardcover edition in  April 1977.

One of my favorite authors , third place after Robert F. Young ( no best of, but you might try “The worlds of Robert F. Young” ) and Harry Harrisson. From the table of contents, i like “Alien earth” best. Too bad “The stars, my brothers” is missing from that collection, it is one of his best stories in my opinion.

Another “great” that I had never heard of. Thanks for informing me John. The list grows on . . . .

Interesting to know that Leigh Brackett was married to Hamilton. Did his name have more “brand recognition” than her’s back in his day? The reason I ask is because I’m definitely familiar with Brackett, but had not heard of Hamilton.

I have to admit I’ve never read anything by Robert Young (although I was very tempted by The Vizier’s Second Daughter). What do you suggest I start with?

> Another “great” that I had never heard of. Thanks for informing me John. The list grows on…

Glad to be of service, James!

> Interesting to know that Leigh Brackett was married to Hamilton. Did his name have more “brand recognition” than her’s back in his day?

Oh, I think so. She was fairly popular, but not nearly as prolific, and she had relatively few novels to her credit.

On the other hand, her screenwriting doubtless made her a much better living than Hamilton’s pulp output.

Off the top of my head i’d say
“Little Red Schoolhouse”
“Romance in a Twenty-First Century Used-Car Lot”
“The Moon of Advanced Learning”
“Emily and the Bards Sublime”
“The Last Yggdrasil” (Fair warning, this one is really more of a tragedy)

And of course there is
http://en.wikipedia.org/wiki/The_Dandelion_Girl

Young’s writing was pretty diverse, a love storyor something light-hearted here, something thoughtfull there and a wrecked universe now and then,too.

> and a wrecked universe now and then,too.

No, not really. It is hard to define, but reading Young you get a feeling that he… how shall i put it, wants his characters to be happy, even if life goes down the drain.

And i cannot imagine Hamilton writing something like “Chicken Itza”; way to funny. Or “Abbyss of Tartarus”, which is pretty far out (man, whale, space, love, ancient greek manifestations)

I hate to be a spoil spport, but this collection barely shows how wild, wonderful and wacky Ed Hamilton was waaaaaay back then. I enjoyed this collection and many of his later writing (even though I despise Capt. future)but if you want to see what a madcap genius of a story teller he was then you’ll have to get hold of a few of those (terribly expensive) Hamilton collection from Haffner Press. The man wrote some of the most entertaingly over the top stories during the late 20s and early 30s. Sadly none of these appear in the Ballantine collection. I feel that “Thundering Worlds” and “The Accursed Galaxy” are the only two that come close to showcasing his own brand of inspired insanity.
But to be fair, everything is purely a matter of taste.

Just finished this volume. It had some real gems in it.

From other reviews, and before reading this book, I took it that Hamilton was known for some crazy and insane ideas–at least they were considered so at the time he wrote them. I can see why: he has more than one “mad scientist” style story along with tales of whole worlds being destroyed or saved–very ingenious notions

But what primarily struck me about Hamilton was how good of a character writer he was. His stories “What’s It Like Out There?” and “He That Hath Wings” are incredibly rich in terms of feeling and experiencing the psychology of the characters within. In addition, Hamilton was also very good at producing mood pieces, particularly depressing or nihilistic ones.

This was a very good collection. I’m glad I read it.

> what primarily struck me about Hamilton was how good of a character writer he was. His stories “What’s It Like Out There?”
> and “He That Hath Wings” are incredibly rich in terms of feeling and experiencing the psychology of the characters within.

It’s funny — when I read your first line, my first thought was “I wonder what he thought of “What’s it Like Out There,” and “He That Hath Wings?”

I grew up reading Hamilton’s pulp stories — and loving them — but it’s his later work that I think will really endure.

> if you want to see what a madcap genius of a story teller he was then you’ll have to get hold of a few of those (terribly expensive)
> Hamilton collection from Haffner Press. The man wrote some of the most entertaingly over the top stories during the late 20s and early 30s.

It’s funny — that reminds me of my early frustration when Asimov rapturized about Hamilton’s Cities in the Air and The Universe Wreckers. It was almost impossible for a 13-year old in Canada to get his hands on pulps from the 1920s and early 30s, and that’s the ONLY place those stories appeared.

So I snatched those Haffner volumes as soon as they were published, believe me. They may seem expensive at $40 each, but just try pricing any of the original pulps!

I definitely think “What’s It Like Out There?” and “He That Hath Wings” should continue to be reprinted in anthologies. They are both excellent stories–not to be forgotten.

Glad you put me onto these best ofs.

You should write some reviews for us. I barely have room to touch on the stories when I do these write-ups (odd as that sounds). I think a more in-depth look would be welcomed.

[…] more inspiration. we recently covered several Edmond Hamilton books — including Starwolf and The Best of Edmond Hamilton — and we reprinted his very first story, “The Monster-God of Mamurth” (from the August […]

[…] and sweet. “The Man Who Returned” was reprinted in 1977 in The Best of Edmond Hamilton. Here’s the Science Fiction Book Club edition, with a classic cover by Don […]