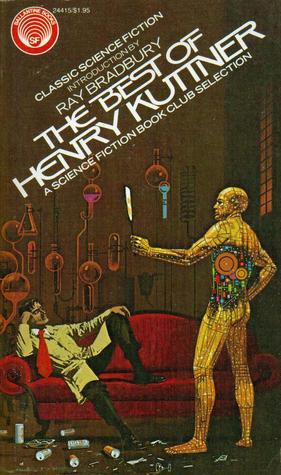 I’ve gotten used to introducing these vintage Best Of collections — as I did recently with The Best of Robert Bloch and The Best of Murray Leinster — assuming that most readers have no idea who the authors are.

There’s been a surge of interest in Henry Kuttner lately, however, and he’s been in the news half a dozen times this year at Black Gate alone. The most recent was just last week, when we listed him as one of the luminaries covered by Bud Webster’s Past Masters.

But before that, Connor Gormley wrote a Fantasy Face-Off featuring Henry Kuttner’s Elak of Atlantis vs. Robert E Howard’s Conan the Cimmerian, I discussed The Startling Worlds of Henry Kuttner and looked at his Weird Tales classic “The Graveyard Rats.” And we announced the lucky winners of the giveaway copies of Thunder in the Void, the deluxe collection of Kuttner’s Space Opera tales from Haffner Press.

It’s not just us with a recent Kuttner obsession. In just the last few years, there’s been a re-discovery of this brilliant pulp author. Haffner also published the detailed retrospective Detour to Otherness, a collection of tales co-written with his wife, C.L. Moore, and a generous volume of his weird menace tales, Terror in the House: The Early Kuttner, Volume One. He’s been a favorite over at Paizo’s Planet Stories imprint as well, and they’ve brought his classics The Dark World, Elak of Atlantis, and Robots Have No Tails back into print in handsome new editions.

And his 1943 short story “Mimsy Were the Borogoves” (co-written with Moore) was made into the feature-length film The Last Mimzy by New Line Cinema in 2007.

Seriously, that’s not bad for someone who died over 50 years ago.

That doesn’t even include the numerous digital collections and reprints from Kuttner’s impressive catalog that have proliferated at Amazon and B&N over the past 18 months.

But we’re here to talk about the 1975 Del Rey paperback The Best of Henry Kuttner, edited by Lester del Rey (presumably, as he was general editor for the series and the actual editor is uncredited). 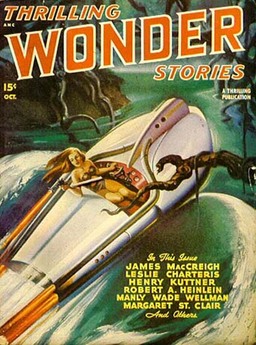 Most of the stories contained within were co-written with C.L. Moore, although in large part they were credited exclusively to Kuttner on publication. Virtually all of them were published in SF pulps between 1939 and 1955.

Here’s the back cover text, focusing on five of Kuttner’s most popular pieces:

The Best of Henry Kuttner

Here in one superlative volume 17 science-fiction tales by a master storyteller.

“Mimsy Were the Borogoves”
Scott and Emma seemed to be ordinary children — until they found a strange box of toys!

“The Proud Robot”
Never was there an inventor quite like Gallagher; he did his best work when drunk, but could never remember what he invented when he sobered up!

“The Misguided Halo”
A young and inexperienced angel accidentally bestowed a halo on the wrong man — and then the trouble began!

“Or Else”
An extraterrestrial visitor tried to make peace between two Mexican peasants feuding over a waterhole — with disastrous results!

“Exit the Professor”
What a family — those Hogbens! Survivors of the fabled Atlantis, these hillbillies used telekinesis, teleportation and telepathy to make their way in the 20th Century! 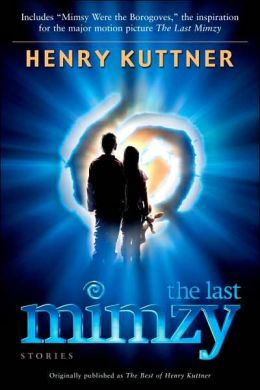 After the release of The Last Mimzy, the book was repackaged as The Last Mimzy: Stories, a trade paperback movie tie-in February, 2007. The edition is still in print, priced at $13.99.

There was also a hardcover from the Science Fiction Book Club, with (as usual) a different cover: 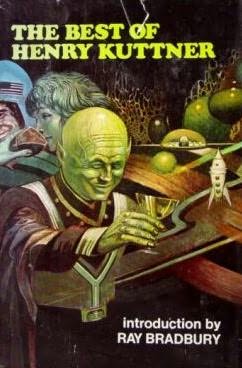 So far we’ve covered the following volumes in the Classics of Science Fiction line (in order of publication):

John: Between you writing you assume readers are unfamiliar with these authors and the authors of the Tor.com Appendix N piece on Jack Vance saying they really had no other experience of him or his works made me feel very old. With so much new stuff out there, it’s easy to skip over seventy+ year old stories. I don’t want to sound like some crotchety old guy moaning about the good old days, but , still, it makes me a little melancholy that stories and authors, I and all my genre reading friends were at least familiar with, are just sort of fading from the general reading audience’s attention. Hopefully, articles like this help keep attention on some of the best of the older stories.

True, true. You’re certainly not alone in feeling that the genre’s history is slowly slipping away between our fingers.

Of course, when I was growing up and reading SF magazines in the 70s, writers and reviewers were bemoaning the same thing. I had no time to listen to them though… I was too busy reading Roger Zelazny, Richard Adams, Robert Silverberg, John Brunner, and other young punks doing work that set my brain on fire.

I think every generation goes through this. In a healthy, thriving genre, new writers will push the old ones off the bookshelves.

It’s inevitable. If it doesn’t happen, it’s because your genre is dead (like Westerns are today).

Eventually, I did discover the pulp writers of an earlier generation — Stanley G. Weinbaum, Henry Kuttner, Murray Leinster, Edmond Hamilton, C.L. Moore, Leigh Brackett. And it was all because of those critics and writers who just wouldn’t shut up about how good they were.

So I think it falls to us to do the same. Since we’re the ones who care, it’s our duty to communicate our passion to a younger generation. And if they don’t listen, it’s because we’re doing it wrong.

It helps that Paizo Publishing reissued many stories by classic pulp authors in the planet stories library. I got my introduction to Kuttner from “Robots have no tails”.

The Planet Stories Library though i found by chance when i was looking on amazon.de for prints of old pulp covers.

By now most of the planet library is on my bookshelf, excluding those that i deem to new, like the stories by Gygax.

John, you have probably read Gygax’s books that are part of the Planet Stories library. Are those any good? As in, in the same league as Wellman, Kuttner, …?

John: I’m in absoulte agreement with you and it’s a big part of why I blog about classic swords & sorcery. Desiring to see a genre live and grow is why I write about new stories. My biggest disappointment is that with the explosion of e-books, so many classic authors I grew up devouring, like Simak and G. Dickson, are still mostly unavailable.

I disagree with some of what Foz Meadows wrote earlier this month, but I totally understand and sympathize with her desire to read books that speak to her. Modern sci-fi and fantasy’s twice as old now as it was when I was born in the mid sixties and it’s exploded way beyond being a niche market. There’s just so much stuff to sort through.

So, we have to keep plugging away at promoting the best of the old and unsung while not losing sight of the new and exciting.

Oh — and congratulations on having the top article on the BG blog last month! You’re certainly practicing what you’re preaching.

> John, you have probably read Gygax’s books that are part of the Planet Stories library. Are those any good?
> As in, in the same league as Wellman, Kuttner, …?

I haven’t read them all, so I can’t judge them all fairly.

But the ones I have read? No. I’m a huge fan of Gygax’s work, but I find his fiction weak (at best).

I don’t know how I missed this post, but I’m glad I found it. I read the SFBC edition of this book when I was 14, and the effect it had on me was incredible. I was blown away by “Mimsy Were the Borogoves,” “The Proud Robot”, and “The Twonky”. Since then I’ve tried to track down every story by Kuttner (with or without Moore) that I can find and/or afford.

It’s been good to see the renewed interest in Kuttner in recent years. While this book calls itself the best of his work, Kuttner wrote several stories which weren’t included that IMO are as good or better than what you find here. “When the Bough Breaks” and “We Kill People” are the ones that come to mind. Maybe they’ll show up in a Haffner Press volume soon.

Thanks for another great entry your series about this landmark series.

[…] I’ve discussed here (starting with The Best of Murray Leinster, The Best of Robert Bloch, The Best of Henry Kuttner, and The Best of C M Kornbluth.) I believe it may also have been the first, since it has the […]

I finished this collection about a month ago. Great book! Of the 4 or 5 Best ofs that I’ve read so far, this is probably my favorite.

Let me just say Kuttner is hilarious! “The Proud Robot” has got to be one of the funniest stories I’ve ever read–loved it! I can’t remember laughing that hard or out loud over a book since Hitchhiker’s Guide to the Galaxy or a P. G. Wodehouse tale.

Also funny were the two stories focusing upon the Hogben hillbilly family–reminiscent of Lovecraft’s Whateley family from “The Dunwich Horror.”

“What You Need” was a familiar tale since I believe there was an old Twilight Zone episode based on it.

Glad you enjoyed them, James!

Listening to you, it makes me wish I had more time to re-read these books before I write about them. I barely remember the stories you mention.

I was lucky enough to have the chance to read THE BEST OF FREDRIC BROWN before doing the write up this weekend. I’m really glad I did.

Next up is C.L. Moore. I think I will make sure to re-read at least a few of her most famous tales before I write the entry. Makes the whole thing a lot more enjoyable for me (although I’ll note it also takes a lot longer!)

Oh man! C. L. Moore! I read one of her stories in an anthology last year and absolutely loved it! I’ve definitely got to track down that Best of.

Do you remember which story?

I was reading Kuttner’s best of today, and came back to this older BG post and saw that you left a question (3 years ago to the day!) that I never answered.

The story was “Black God’s Kiss” in The Sword and Sorcery Anthology, edited by David Hartwell and Jacob Weisman (Tachyon, 2012).

Thanks James! And that’s a classic story, and no mistake.