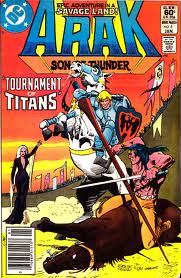 Wow! By issue 5 of Arak: Son of Thunder, Roy Thomas and Ernie Colón have really hit their stride. With this issue, I figure I’ve ingested a large enough sample size to recommend this title unequivocally to fans of sword-n-sorcery and high fantasy. I mean, it’s not genre-defining or trend-setting or anything, but it’s well done. Good stuff.

They’ve established main and supporting characters, set up the parameters of the plot, and now the cogs and wheels of the long-term story are starting to turn. But before we get to all that, I must make a follow-up observation about the art:

It is surprising how much of a difference an inker can make. On first glance, one might assume the title had a new artist, but no. Colón’s pencils are now inked by Rodin Rodriguez (who is credited as “Inker/Embellisher”). Inkers bring different styles to the table, and the end product really can take on strikingly different characteristics depending on who is laying down those embellishments.

In my description of the art in my post for issue 4, I noted that the inking sometimes feels a bit rough and muddy, occasionally obscuring or flattening out the action. Here is a study in contrast: the characters and scenes in issue 5 really pop; they’re well defined and striking. Rodriguez’s inking is not as dark or splotchy as his predecessor; rather, he brings a more artistic cross-hatching style, with bold, solid lines that better define bodies and objects.

Colón’s own lay-outs seem to be getting bolder as well, with more of the action overlapping panels and breaking out of the borders, the borders sometimes vanishing altogether, and more one- and two-page spreads (like the great two-page title spread of knights jousting in the crowded arena). Perhaps, with less story to cram in to this issue, he felt more freedom to stretch.

Arak and some of the other characters have never looked better, so much more well-defined. The bewitching beauty of the sorceress Angelica, with her hypnotic blue eyes, for example.

“It is an age of darkness…A time when dragons stalk the earth, and even stranger creatures burrow ominously beneath it…an age of witches and warlocks, of warriors and wizards.”

But now let’s hie to the story itself. “Tournament of Titans” basically sets up the coming of Angelica and her brother Argalia to the court of Carolus Magnus. They choose their timing well, because it is tournament time, which gives them a perfect opening to produce a classic tales-of-King-Arthur-style challenge to King Magnus and his knights, the Twelve Peers.

Before we get to that, however, we have a rather longish prologue (we’re 12 pages in before the title page appears) of Malagigi using his magic to visit the devil Belphegor for information. He brings Arak along for the ride — what appears to be a literal ride on a thaumaturgic pentagram-circle into the bowels of the beast. Belphegor is that classical depiction of the horned devil who has a second face set into his abdomen — his eyes where his nipples would be, and a toothy, gaping maw right in his belly. Entering into the devil’s mouth, they visit the place that Thomas notes Dante wrote about in The Inferno. A slight mishap — Malagigi loses his balance and accidentally scuffs part of the pentagram’s protective chalk-line away — nearly spells the end for him and Arak both, leading Arak to rather ineffectually draw his otomahuk against Belphegor’s massive teeth while Malagigi chalks the line back in. There are severed hands that latch onto Malagigi’s cloak — “No! Get thee away, thou Hands of Hell! I ABJURE THEE — AWAY!” — and all sorts of other fun to be had before our heroes safely return to Malagigi’s tower.

“There is a great barrier/between the spirit world/and the sons of men./Let us keep it in good repair. –Quontauka Proverb.”

All this, we learn, was so the wizard could get some more intel on the motives of Angelica and her brother. So now we get a little back-story courtesy of the sorcerer’s crystal ball: Angelica’s father, King Kalafron, and their kingdom White Cathay are under siege by Tartar Huns. The siblings are on a mission to raise knights to come to their aid. All of Angelica’s scheming and conniving, it turns out, is simply because they are on a mission to liberate their kingdom? Okay, I guess we can get behind that motive, even though she seems awfully twisted and bloodthirsty in her efforts to achieve that goal.

We also get intermittent glimpses into Arak’s troubled thoughts, enough to learn that he feels quite conflicted about this silver-tressed sorceress Angelica. He wants vengeance on her for her role in the deaths of the Norsemen who adopted him, especially the two men who “were like fathers” to him (way back in issue 1) — “And they will be avenged, Arak vows grimly to himself…no matter what bloody, wolfish form that vengeance may take!” And yet… and yet Angelica has pricked something in him, and “he wishes it were over and done with, as soon as possible…so that he can begin to learn if it is easier to live with regret than torn between the twin fires of lust and hatred!” There is lots of overwrought prose like that in this issue, and it is quite fun to read.

Anyway, when this long-rumored Angelica and her brother make their grand entrance in the middle of a joust, the challenge they issue is straightforward. Oh, I’ve got to mention, though, the joust that her appearance so abruptly aborts is one Valda the Iron Maiden has suited up for. Valda is rightly pissed about this, and is close to throwing down with Angelica (Is it sexist and politically insensitive now to say “cat fight”? Yeah, it probably is, unless you’re on Jerry Springer. So I won’t.), but Arak intervenes.

To do so, he appeals to the rules of the tournament he has himself learned this day: “Isn’t it the King’s rule, Valda, that no blow may be struck in anger, amid such a tournament?”

Valda relents, but just a little torqued off with Arak: “It is, by the saints — or else I’d strike one now — at you!”

Angelica, meanwhile, sneers, “So, Arak — we not only meet again, but you’ve now become my Protector! How touchingly quaint!”

With Valda’s temper tamped down, Angelica makes her plea. The deal is this: her brother will take each of the Twelve Peers on in the joust. Each knight Argalia bests must swear fealty to the prince and “go with him to preserve our capital Albracca from the Hunnish hordes that now besiege it.” If, on the other hand, Argalia loses, the victor gets as his prize Angelica.

The knights practically fall over themselves, drooling, to be the first to accept the challenge. When Arak observes to Malagigi that “it’s as if she has bewitched them, to make them risk their very freedom, against nothing but her dubious virtue,” Malagigi, grinning wryly and stroking his chin, observes, “If so, lad, ‘tis the witchery of a fair face and a tapering form, merely. And don’t tell me you’ve not felt that exquisite ‘magic.’” Indeed. 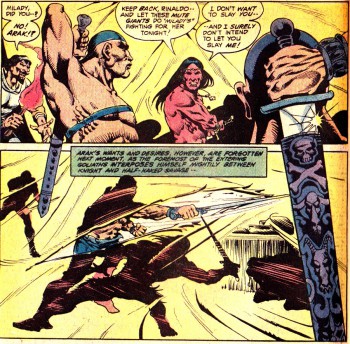 Rinaldo, being the tournament jousting champion, is given first crack at Argalia. Argalia dismounts him handily on the very first pass. One down, eleven to go. Angelica, her brother, and four giant eunuchs (their entourage), head off to spend the night camping by the Stair of Merlyn. Rinaldo, true to his word, accompanies them. They’ll be back on the morrow to take on another of the Twelve Peers.

Thing is, Arak doesn’t think this is fair play: when the two knights met, he observed a “burst like lightning” that lit Rinaldo up “at the very instant when Argalio’s lance” came in contact with his breastplate.

He queries Malagigi as to why the wizard did not speak up when sorcery was clearly at work. Malagigi, as we have seen, is generally slow to act for whatever enigmatic reasons he might have. The wizard is intrigued at Arak’s powers of observation, however: “I did [see the earmarks of sorcery in the contest], Arak — though it surprises me that you did, when no man else of the King’s Court saw them! There must be wizardly powers lurking in you somewhere, struggling to be released, that you sensed the magic of lance and steed.”

Malagigi goes on to explain why he held his tongue: “The King, too suspects — but such is his sense of honor that he’d need proof to go back on his word.” Thus, his plan to make a visit to Angelica’s camp by Merlyn’s Stair that night in order to gather such proof.

Off Malagigi and Arak go, well aware that they must be crafty, else they might find themselves having to fight Rinaldo — who, according to his oath, would reluctantly have to defend his new lieges.

They sneak into Angelica’s tent-chamber, thinking her asleep, and Malagigi tries to levitate her magic ring away from her. She, of course, was waiting for this. She snatches the ring back from the wizard as Arak finds himself beset by her mute giants.

Malagigi demands that Angelica release Rinaldo from his vow, warning her that she does not have time to conjure up the demons she would need to overpower the wizard.

With a smirk, a mischievous wink of those long lashes, and a flash in those beguiling eyes, the comely conjurer retorts, “That would be true, Malagigi, if I’d not conjured such demons up before I laid me down to sleep — and bade them hide beneath my bed!”

With that, her bed overturns, revealing the worst nightmares of any child who wondered what might be lurking under the mattress. A flurry of demons snatch Malagigi up and carry him off into the sky.

Going after the snickering sorceress, “Arak does not see or hear the towering monstrosity behind him — till he is lifted like a child’s plaything — and hurled bodily, into the beckoning shadows of the surrounding forest — ”

And that’s where we close with a cliffhanger: Arak awakening the next morning, bruised and bloody, up in a tree…

Next Issue: “A Quontauka’s Quest!”

P.S. This issue’s cover is the first instance, in this series, of the cover action portraying something that doesn’t strictly take place in the book. Arak never actually fights Argalia in this issue, nor does he participate in the jousts (which are reserved for knights only).