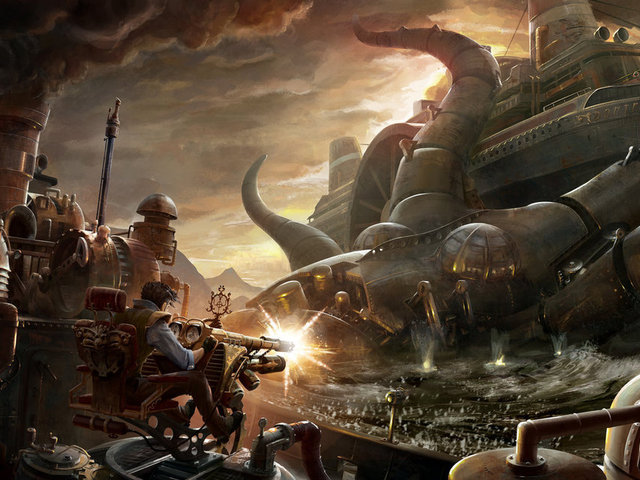 1. What drew you to Steampunk vs. Aliens initially? What is it about the combination that you thought would be cool for readers or that writers would have a lot of fun with?

Clockwork Universe: Steampunk vs. Aliens was actually Patricia Bray’s idea, which she got after we both went to the movie Cowboys vs. Aliens (mostly to see Daniel Craig).  Patricia and I have a list of potential anthology ideas already made up, so when I decided to create the Zombies Need Brains small press, we went to the list of ideas and asked ourselves, “Which idea has the most oomph behind it? Which idea really grabs you by the throat and hangs on?”  Out of all of them, steampunk vs. aliens had the greatest oomph.  *grin*  What draws me to it is the fact that I haven’t seen this kind of mix in genre before, and also the fact that there are just so many possibilities with that concept.  Steampunk vs. aliens . . . my  mind just explodes with ideas, and I’m not even writing a story for the anthology!  So the concept has power to it.  I can see readers’ eyes opening wide when they hear about it and writers’ giggling with glee as they contemplate potential plots.  It’s just a cool mix altogether.

2. What do you hope this anthology brings to the marketplace once it’s out and readers start digging in? Are you hoping for a bit of a throwback to the golden age of fiction? A fresh new take on the sub-genre? Something else?

Actually, what I’m hoping for is a good mix of a bunch of different styles, because that’s what Patricia and I like in our anthologies.  I’m expecting to see a few stories that are throwbacks to Jules Verne and H.G. Wells.  I’m also expecting fresh new takes, more modernistic in flavor.  I’m hoping that we see some serious darker stories, as well as some light humorous pieces.  That was actually one of the criteria for choosing the anchor authors: we wanted authors with different styles, some that would be more modern, some that would harken back to the golden age of fiction, some that we really don’t know what to expect.  In the end, we want a cool mix of different ideas, plots, styles, and conflicts.  I’m certain we’ll get it, based on past experience.

3. One of my personal favorite aspects about Kickstarter is its interactive nature, the way that you can interact with potential fans, and have them shape the project. Have you found this to be true of Steampunk vs. Aliens as well? What has been your experience and impressions of interactions with backers of the Kickstarter?

This is my first experience with Kickstarter and it’s certainly been enlightening.  There is a ton of communication with the backers, more than I expected, and they have made suggestions and comments that have shaped the project.  I encourage this feedback and try to initiate it by sending everyone a personal thank you note for backing us.  Many have made suggestions for how to reach out and find more backers, with things like possible new reward levels, new additions to the book, etc.  The comments that had the most impact so far on the project were those suggesting we offer the paperback option immediately.  I originally had it as a possible stretch goal, mostly because there’s a significant cost and risk involved with producing a paperback over an ebook.  But in the end, I took the comments from the backers into account, and what my dream for this little small press really entails, and decided that if I want a small press, I’m going to actually press something!  *grin*  So I added the paperback option to the Kickstarter, and I feel good about that decision.  The backers have altered the project in other more subtle ways as well.  I wish I could act on all of the suggestions (such as making the anthology an open submission; that’s just not feasible at this stage).  But I’m certainly considering every suggestion that I’m given.

4. The Kickstarter is only a week in and is doing great, but I imagine there’s always room for improvement. If you could start all over again, would you do anything different? What has been the most successful aspect of the Kickstarter so far?

I know, we still have 3 weeks left and we’re already near $7,000.  70% funded!  It’s extremely exciting.  I think the most successful aspect of the Kickstarter has been the anchor authors involved in the project.  I think this is what’s drawing people into the project and getting them to pledge.  I don’t think we’d be doing half as well without their support, both in adding their names to the book and in helping to spread the word about the Kickstarter to their fans.  I knew this was going to be key going into the project.  In terms of room for improvement, the biggest item would be the introduction of the paperback option.  In the future, I’d definitely have that built into the project and open as a reward level on Day 1.  It was a mistake not to have done that with this project, even though the project had only been running for a couple of days before I made the correction.  There are still a few things I haven’t introduced to the Kickstarter yet (such as some add-on options), so we’ll see how those go.  Will they be worth it?  Too much trouble?  We’ll see.  As I said, this is my first Kickstarter, so it’s all one giant learning experience for me.

5. What’s ahead for ZNB? Where do you hope to take Zombies Need Brains after this initial anthology?

Ah, my future plans!  I’d like ZNB to become a force (for good) in the publishing world.  I want it to be respected and I intend to do that by treating the readers, authors, editors, and artists with respect myself.

The short term goals are to produce SF&F themed anthologies initially funded by Kickstarter at a rate of about two a year, with the reward levels on Kickstarter steadily decreasing until essentially the readers are simply “preordering” the books, or until I can completely drop using Kickstarter altogether.  The first few anthologies will be edited by Patricia Bray and me, but after that I want to pull in additional editors.  Similarly, the first few anthologies will be invite-only to published authors, but I intend to work steadily toward open submissions from all writers.  There will still be published authors “anchoring” the project, of course, but I intend to eventually be open to new voices in the field.  I know writers out there would like open submissions right now, but ZNB needs to gain its feet before that can happen, and the best way to do that is to work with established authors.

I’d like to use ZNB to discover unknown talents in art, as well.  The cover art for this project was found by scrolling through Deviant Art.  I’d like future books to have covers from undiscovered, or at least unrecognized, artists in the SF&F field.

As for long term goals, I’d like to branch out into original novels, perhaps pick up series that have been abandoned by other publishers (so that readers can find out what happens next), and of course continue publishing anthologies.  But I want to take things one step at a time, so that I don’t get overwhelmed and so that the small press doesn’t crash and burn like so many have before this.  I believe there is a niche for a small press that produces quality books by great authors with cool cover art, and I think Zombies Need Brains will fill that niche.

Bradley P. Beaulieu is the author of the critically acclaimed epic fantasy series, The Lays of Anuskaya, comprised of The Winds of Khalakovo, The Straits of Galahesh, and The Flames of Shadam Khoreh. Find more at www.quillings.com.

Steampunk vs. Aliens?! Heck…that happened at my gaming table last week when my friends and I played SMASH UP! Only it was Steampunk Dinosaurs vs. Alien Ghosts vs. Pirate Plants vs. Russian (riding bears) Wizards.

Geez…I love me some high concept and I’ll have to check out this project.