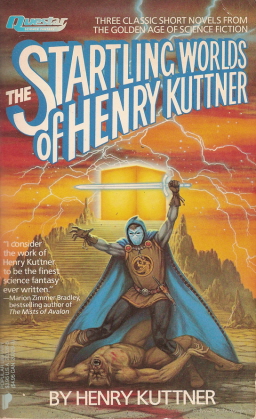 I have fun with these Vintage Treasure pieces. For one thing, they’re a great excuse to shine some light on interesting items that cross my path.

Take Henry Kuttner’s paperback collection, The Startling Worlds of Henry Kuttner. Published in 1987, nearly 20 years after his death, it’s unusual in several respects. For one thing, it includes only novellas. And all originated from a single source: the long-dead pulp magazine Startling Stories.

I think this is a neat idea. The best writers of the pulp era — and Kuttner certainly qualifies — have seen most of their short fiction studiously reprinted. In fact, we’ve covered four generous collections of Kuttner’s pulp fiction just in the last few years: the weird-menace collection Terror in the House, the first volume in The Early Kuttner series; Thunder in the Void, gathering his early space operas; Detour to Otherness, the massive retrospective of his collaborative work with C.L. Moore; and none other than the distinguished James Enge reviewed his Gallagher stories for us, collected in Robots Have No Tails.

But short novels, 40,000-word epics printed in a single pulp issue, rarely (if ever) get reprinted. They’re too long for most collections, and generally too short for a standalone novel, so most of them have slipped through the pages of history. The Startling Worlds of Henry Kuttner rescues three such wonders and puts them under one cover.

But that’s not even the most interesting thing about The Startling Worlds of Henry Kuttner. Since all three novels appeared in a single source, this isn’t just a collection of Kuttner’s work. It’s an anthology that celebrates Startling Stories. Just as most collections give us insight into the recurring themes in an author’s work, this book offers us a  generous sampling of the kind of fiction that appeared in that grand old pulp.

The Startling Worlds of Henry Kuttner collects The Portal in the Picture (originally published in 1949), Valley of the Flame (1946), and The Dark World (1946). It’s one of the most intriguing collections I’ve come across in the past year. At press time, there are 23 used copies available on Amazon.com, ranging in price from $2.25 to $9.99.

Hmmmmm… “The Dark World” is the title of the forthcoming second THOR movie. Could Marvel be taking a “page” from Kuttner? Or is this just a repetition of a cool-sounding title?

> “The Dark World” is the title of the forthcoming second THOR movie. Could Marvel be taking a “page” from Kuttner?
> Or is this just a repetition of a cool-sounding title?

The latter, I think. As much as I like the thought of Marvel stealing titles from SF’s great pulp writers, it’s far more likely a coincidence.

Startling is the only science fiction pulp I’ve collected, and Kuttner is basically the reason why.

Oh, there’s also a real allure to the fact that the magazine carried no serial stories, that each issue had a complete ‘novel’.
But as cool as some of the other authors Startling had weighing in with a full length epic every issue (Hamilton, Williamson, Wellman, Brackett, Brown, Clarke, Leinster, Russell, Farmer, Knight, Anderson, Vance…) I always found Kuttner’s stuff the tastiest. His work is always dependably entertaining, but the earlier tales offer some of the purest ‘sense of wonder’ reading I’ve found.

This collection is fine stuff. The Portal in the Picture is a later work and a bit soft compared to the other two. Valley of the Flame is a pulp powerhouse, mingling lost race elements with sf and jungle adventure tropes. And The Dark World is simply a classic pulp fantasy novel, celebrated in its day as daring to feature an “anti-hero”. I thought I detected a number of clear instances of inspiration for Roger Zelazny’s Amber series in The Dark World, but others have disputed this.

All three of these books were reprinted in the 1960’s by Ace. This is all well and good, but there were so many other Kuttner titles from Startling that could have been brought back into print.

I still haven’t read all of Kuttner’s novels for Startling, but my running favorite remains A Million Years to Conquer (11/40).
It is a difficult novel to summarize. I guess it’s a time-travel/superman/end of the world/monsters on the loose novel, fortified with romance, betrayal and coming of age elements.

I’m aware that I am as full of hyperbole as an old issue of Thrilling Wonder Stories, but this little book really is amazing. Some of the prose is fairly workmanlike, but this seems to spring from the author frenziedly trying to slam as many outrageous elements into his story as he can, and do it as fast as he can. Wild ideas rush through the hurtling narrative in a torrent of pulp imagination. I know this one was reprinted in the early 70’s, but I cannot remember the publisher.

I’ll keep my eye out, thanks.

The more Kuttner I read, the more I like.

Thanks for the delightful endorsement of Startling Stories. My pulp collecting (when I could afford to collect pulps) was focused on ASTOUNDING and AMAZING. STARTLING has been sadly neglected, and I stare at the covers online and weep with envy.

I had the same response you did when I saw which three novels were contained in THE STARTLING WORLDS collection: wonderful, but I wish they’d reprinted one or two that hadn’t eventually appeared as Ace paperbacks.

A MILLION YEARS TO CONQUER was re-published in 1968 by Popular Library (as THE CREATURE FROM BEYOND INFINITY, I think), with a Frazetta cover, no less. Kuttner and Frazetta — quite the combo.

> The more Kuttner I read, the more I like.

I read Creature From Beyond Infinity not too long ago and I enjoyed it as well. It’s not extraordinarily well-written but it has huge ideas (personally I suspect Jack Kirby was a fan of this story but that’s just a hunch…) and is just plain fun to read.

Wow! That’s an endorsement if I’ve ever heard one. I’ll certainly have to check it out.

Well, I don’t want to oversell it. It’s just that some of the ideas in it reminded me strongly of some Marvel comics I’ve read, and I have read that when Kirby was stumped for an idea he would supposedly turn to a big wall of classic sci-fi he had in his studio 🙂

[…] Henry Kuttner’s Elak of Atlantis vs. Robert E Howard’s Conan the Cimmerian, I discussed The Startling Worlds of Henry Kuttner and looked at his Weird Tales classic “The Graveyard Rats,” and we announced the […]