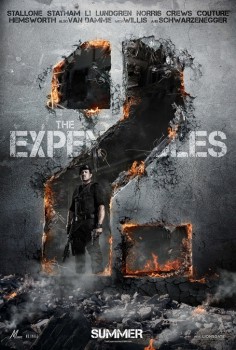 Two years ago I walked out of a theater showing The Expendables, shaking my head in mild bewilderment. I don’t just have a high tolerance for ‘80s action cheese; I actively embrace it. I was nearly as excited about the release on Blu-ray last week of Death Wish 3 as I was about Jaws’s simultaneous hi-def debut. (Well, not really, but that’s my way of drawing your attention to what an over-the-top great/stupid movie we have in Death Wish 3.) But 2010’s The Expendables pushed none of my buttons. It was dull, the action flat, and Stallone seemed to think audiences would care about the tangled romantic lives of his and Jason Statham’s characters (at the expense of the rest of the cast). Stallone also seemed ignorant of the premise’s goofy appeal and played too much of it straight. The film ended up wasting most of the names on the marquee and couldn’t live up to its modest goals. It was also badly tarted-up with occasional post-production blood to get an R rating after it was shot for PG-13. It was a misfire for what looked like a simple shot.

Yet it made enough money for them to take a second shot, and when I left the theater after seeing Expendables 2, I felt they hit the target. I won’t go so far as to say “they got it right,” because “right” isn’t something a movie like The Expendables 2 would even know how to define, but the folks aboard this go-round sure “got it better.” It’s the best dumb fun movie of the summer for fans of the old-school testosterone action pics.

Here’s all you need to know about what kind of movie the filmmakers on Expendables 2 have put together: During the finale and within the space of thirty seconds, there are three lines quoting The Terminator, a line from Die Hard, and a reference to Rambo. Chuck Norris strides onto the screen through a haze of combat dust to the whistling strains of the theme from The Good, the Bad and the Ugly. Stallone grunts “Rest in pieces!” after he and company shred some fools with a rain of bullets. Dolph Lundgren plays the brains of the team. And Jean-Claude Van Damme is the villain.

How much more of a review do you need after that? The Expendables 2 is utterly silly, and everybody seems aware of it and rides the wave of ludicrous puns and over-the-top action with bloody smiles. Between making the two films, someone must have gotten the memo that the whole concept is actually a gag. 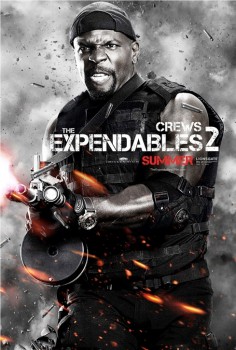 It was probably Stallone who got the memo; even though he handed the director’s chair to Simon West for this movie, Sly has always wielded heavy creative control over most of his films, and he has writing credit on The Expendables 2. West shakes things up and brings a new eye to the production; his filmography isn’t padded with classics (Con Air, Lara Croft: Tomb Raider, the remake of The Mechanic that starred Jason Statham), but he knows what kind of movie he needs to shoot, and I can’t imagine he and Stallone had many differences of opinion about it. The action works in an undemanding way, especially the massive pre-credits scene in Nepal that uses every vehicle humanity has ever invented (I think I spotted a Mycenean chariot in one frame) and a shoot-out on a mock-up of a New York street in the 1950s (a Cold War practice arena).

The core of the mercenary team from The Expendables returns, minus Mickey Rourke and plus Chris’s little brother Liam Hemsworth as the New Guy. Jet Li, who must have done this movie under the duress of blackmail, hangs around only for the opening and then hightails it out of there on the flimsiest excuse. This leaves the core of Barney Ross (Stallone), Lee Christmas (Statham), Hale Caesar (Crews), Gunner Jensen (Lundgren), and Toll Road (Couture) — the same fellows from Expendables — to walk through the loose string of plot-points and explosions. Chuck Norris, playing independent mercenary “Booker,” is essentially a buffed-out cameo who pops up in two spots. I don’t know how Chuck Norris earned getting paired with Ennio Morricone’s legendary music, but I would advise the man to watch out for Clint Eastwood’s wrath.

The script, put together by Stallone and Richard Wenk from a story by Wenk, Ken Kaufman, and David Agosto, fuses together three familiar B-movie action plots so audiences don’t have to work too hard to enjoy the cheesy lines and action.

1) A team of tough guys must go on a mission because they owe a favor to a shadowy figure.
2) It gets personal when a teammate/old friend/family member/token love interest dies at the bad guy’s hands.
3) A village of desperate people need protection from genocidal killers. 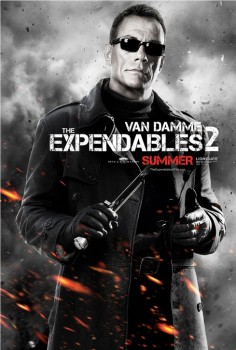 It’s to the credit of director West and his editors for keeping the story moving fast enough that the seams between these patched-together pieces don’t show. Barney Ross and his team of “Expendables” just need slight motivation and a push toward the next people they need to shoot up, and off they go.

I took some pains in the above list to disguise the identity of the sacrificial victim required for the vengeance plot, but if ever there was a character who fills the profile of “Dead Meat” in Hot Shots — i.e. somebody walking around wearing a “Please Kill Me, It Will Be Devastating for Everyone” sandwich board sign — then here it is. The Expendables 2 doesn’t waste time with subtlety. This is, after all, a film where the villains all have tattoos of the head of Baphomet, the satanic goat, on their necks.

Actually, I’ll roll that back a bit: the script makes its two leads, Stallone and Statham, more nuanced characters this time. Instead of saddling them with plot-stopping romance issues, it just lets them free. The only romance left is that Statham keeps getting phone calls from his girlfriend, and Stallone makes lame cracks about it. The emotional core of the film depends on “Dead Meat,” and that is much better than the bore-fest the first movie made of trying to plumb the depths of its lead mercs.

The Expendables 2 gets the tone: this is a dumb story, and it needs dumb lines. No one working on this expected anything but audience groans from a quip like “I now pronounce you man and knife!” (Get it? Because he was disguised as priest and he killed a guy with a knife! Hahaha! Hey look, something else just blew up!) I can sense the smirk behind every moment of intended comedy. But the hard laughter comes from the moments when Stallone gets philosophical about life n’ stuff. These are earned laughs, and looking at Stallone’s career it’s debatable whether he meant these speeches to be funny. I’m going to err on the side of “intentional” because Stallone has gone hardcore in some of his recent films, such as Rambo ’08, and in comparison, The Expendables 2 is a Doris Day comedy. 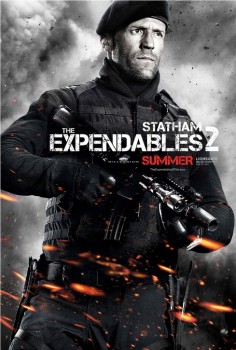 Stallone got the full(er) services of Willis and Schwarzenegger on this one. In the first flick, they played single-scene cameos for poster- and trailer-bait. (The international trailer mendaciously sold them up as if they had equal time with Sly.) They still aren’t leads, but they do get involved in the gunfire of the finale, and watching the two of them careen around in a smart car in an airport terminal wielding heavy caliber weapons and making bad jokes gives me a cozy feeling. Arnold’s acting chops have gotten rusty, but for people who grew up with him as the biggest action star in the world, it’s a pleasure seeing him back on screen killing faceless baddies. Willis is arguably the most accomplished actor in the credits, and he shows it.

As with the last film, I found Terry Crews the most charming and fun member of the cast. In any exchange of banter between the team members, Crews always gets the best line and delivery. Meanwhile, Randy Couture has gotten even worse from the utter blank he was in The Expendables. This movie has plenty of poor actors, but only Couture gives a flat-out poor performance. He might as well not be there, and Crews should steal all his lines and give them some personality. Stallone, please take note for Expendables 3, should it happen: swap Couture for Michael Dudikoff. Thanks in advance.

Let’s see, I’m forgetting someone here… oh, yeah! Van Dammage! Here’s a fellow from my late high school days I haven’t spotted in a stretch. Cripes, I believe the last movie I paid to see him in was Hard Target. JCVD is a hoot as the sleazy Euro villain and former French Legionarie Jean Vilain. Yeah, “Vilain.” He seems so natural as an arrogant douche with a terrible tan that it’s amazing nobody thought of making him the heavy until now. He still has his kickboxing moves too, making his showdown with Stallone seem a touch unfair.

And so The Expendables 2 closes out the genre summer with blood and guts and puns and roundhouse kicks and appearances from the fellows who once ruled the hot months at the movie theaters. It’s dumb and knows it, but that’s refreshing in the dwindling days of August.

Next week: A summer wrap-up.

I liked the first Expendables more than most people, but that might be because I had followed its development closely from when it started as Just Another Statham and Jet Li Vehicle, so I always felt that Stallone coming on and deciding to cast Dolph Lungren in a minor role, and then following the positive reaction that got by squeezing in as many B-movie heroes as he could was a nice tip to the fans rather than the blockbuster action hero rally promised by the marketing. From that perspective, I found it a fun little movie.

Van Damme has quietly turned into a pretty good actor, although most people aren’t aware of that because he’s been lurking in the direct-to-video depths for the past decade. Wake of Death and Universal Soldier: Regeneration are solid movies that feature legitimately good performances from the guy, playing more to the broken down, hang-dog persona he’s developed now that he’s no longer a pretty boy who likes to show off his butt.

[…] is certainly keeping busy — he recently appeared in The Expendables 2 and will be in the upcoming The Last Stand. He is currently filming David Ayer’s Ten, and […]