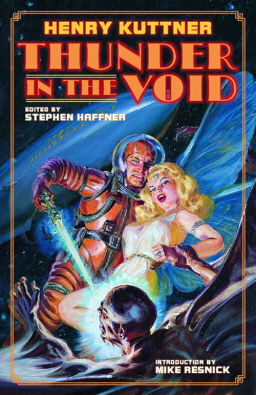 This weekend here in Chicago was the 12th annual Windy City Pulp and Paper Convention, one of my favorite local shows. I met fellow BG bloggers Jason Waltz, Joe Bonadonna, and David C. Smith on Saturday, as well as Bill “Indy” Cavalier, Morgan Holmes, and the always engaging Bob Garcia. Late on Sunday I heard someone call my name and turned to discover none other than William Patrick Maynard, our distinguished Friday blogger, who was selling his new novels The Terror of Fu Manchu and The Destiny of Fu Manchu at an impressively-stocked table. Despite having worked together for years it was the first time we’d ever meet, and I really enjoyed our conversation. He’s a fascinating fellow, and I kept him until well after the show had ended.

But the highlight of the show is always seeing the new titles at the Haffner Press booth, and this year didn’t disappoint. Stephen Haffner’s archival quality hardcovers are works of art, and his taste is excellent. He has published the definitive short fiction collections of many of the finest early pulp writers, including Leigh Brackett, Edmond Hamilton, Jack Williamson, C.L. Moore, and Henry Kuttner.

Still, Stephen may have outdone himself with his newest release, Henry Kuttner’s Thunder in the Void, a massive collection of 16 Space Opera tales from Planet Stories, Weird Tales, Super Science Stories, and other classic pulps. Before Kuttner married C.L. Moore in 1940, he wrote blood-n-thunder Space Opera in the style of one of his favorite authors, Edmond Hamilton — with winning titles like “Raider of the Spaceways,” “We Guard the Black Planet,” and my favorite, “Crypt-City of the Deathless Ones” — all of which are collected here.

The book looks terrific, even by the high standards of Haffner Press. Most of the these tales are appearing in book form for the first time. Also included is a previously unpublished story, “The Interplanetary Limited,” and an introduction by Mike Resnick.

Stephen mention to me that Thunder in the Void may be the fastest-selling book he has ever printed. It was released on April 4th in a printing of 1000 copies, of which only 200 are left. If you want a copy, I urge you to act fast. Thunder in the Void is 612 pages in a high-quality hardcover, with a cover price of $40. Cover art is by Norman Saunders. It is available directly from Haffner Press.

Previous Haffner releases covered here include Kuttner and Moore’s Detour to Otherness, Henry Kuttner’s Terror in the House: The Early Kuttner, Volume One, and the upcoming The Complete John Thunstone, by Manly Wade Wellman.

Yup. Gorgeous book. Got mine via pre-order and preordered the Thunstone collection as well.

*sigh* I guess I better scrounge up some money fast…

Got my copy and it’s beautiful. Am I a bad person, though, if I wish that it (and the rest of the Haffner catalog) was available electronically? They’re all lovely books, but they’re all so big . . .

I’ve ordered mine. Very much looking forward to it. I’m a big Kuttner fan, especially his so-called “science fantasies.”

I can’t say I entirely disagree with the e’version request, but these books are so great, I’ll find the space.

Besides, they still couldn’t get a Kuttner collection in an e’version. His estate doesn’t allow it (shortsighted, perhaps, but there you go.)

See what Baen had to do for their ‘Mountain Madness’ anthology.

I did not know that (re: Kuttner ebooks). Wonder if it’s the same for C.L. Moore. I also, until I was just now looking, hadn’t noticed that Baen seems to have a good slug of Leigh Brackett’s sword & planet stories available electronically.

I wasn’t aware that the Kuttner estate doesn’t allow e-versions. Perhaps they’re trying to sell them separately? A lot of estates that aren’t really plugged into the industry can be a little clumsy that way.

Black Gate » Blog Archive » Win a copy of Thunder in the Void from Haffner Press!

[…] Opera tales by Henry Kuttner. It’s scarcely been on sale two weeks, and it’s already almost sold out, so act […]

[…] Hot on the heels of their last release just two months ago — the gorgeous Kuttner collection Thunder in the Void — they’ve now published Tales From Super-Science Fiction, a thick anthology of […]

[…] honor of the recent release of the massive Henry Kuttner collection Thunder in the Void, I thought I’d talk about Kuttner’s first published story, ”The Graveyard […]

[…] the weird-menace collection Terror in the House, the first volume in The Early Kuttner series; Thunder in the Void, gathering his early space opera; Detour to Otherness, the massive retrospective of his […]

[…] Huttner’s Detour to Otherness, Terror in the House: The Early Kuttner, Volume One, and Thunder in the Void; Leigh Brackett’s Shannach – The Last: Farewell to Mars; and Robert […]

Regarding Kuttner ebooks, judging by the ones Gateway has been publishing, it seems his estate has changed its mind: http://is.gd/L42odC

[…] classic “The Graveyard Rats,” and we announced the lucky winners of the giveaway copies of Thunder in the Void, the deluxe collection of Kuttner’s Space Opera tales from Haffner […]