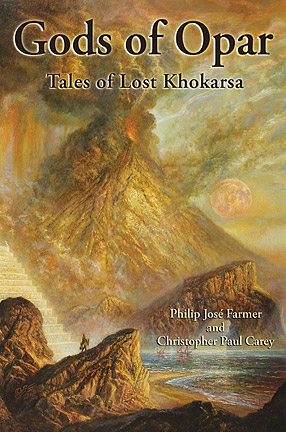 I love these Philip José Farmer collections from Subterranean Press. They’re gorgeous, for one thing, with wonderful Bob Eggleton covers and the top-notch design typical of Subterranean. They look great lined up on my bookshelf.

But they’re also a terrific and economical way to obtain some of Farmer’s best work, whether you’re interested in his short fiction — collected in Up the Bright River, Venus on the Half-Shell and Others, Pearls from Peoria, and the massive The Best of Philip Jose Farmer — or his linked novel series, such as The Other in the Mirror.

The latest offering from Subterranean Press is no exception, collecting two long out-of-print novels and the conclusion to the trilogy, co-written with Christopher Paul Carey, which appears here for the first time:

Gods of Opar: Tales of Lost Khokarsa collects for the first time anywhere Philip José Farmer’s epic Khokarsa cycle, including the never-before-published conclusion to the trilogy, The Song of Kwasin.

In Hadon of Ancient Opar, the young hero Hadon journeys from his outpost city to the heart of the ancient African empire of Khokarsa, battling in the Great Games for the chance to win the king’s crown. But just as Hadon stands upon the precipice of victory, the tyrannical King Minruth usurps the throne and overturns the beneficent, centuries-old rule of the priestesses of Kho. Now Hadon must set out upon a hero’s journey unlike any other—to hunt down a living god and return with his bounty. The saga continues in Flight to Opar, as a decree by the oracle hurtles Hadon upon a perilous quest that will determine the fate of the next twelve millennia. In The Song of Kwasin, Hadon’s herculean cousin returns to Khokarsa after long years of exile in the Wild Lands. But soon Kwasin finds that in order to clear his name he will have to take up the cause against King Minruth himself and stop him before he fulfills his mad quest for immortality high atop the sun god’s bloody ziggurat.

Gods of Opar is 576 pages in hardcover. The trade edition is $45; there’s also a $65 Limited Edition with loads of additional content, including The Song of Kwasin Outline, a Khokarsan Glossary and Calendar, and more. You can find complete details at the Subterranean Press website.

Thanks, John, I’m glad to hear you’re excited about the omnibus!

I’d like to point out the third novel, which I coauthored with Phil Farmer based on his outline and partial manuscript, and with some input from him, has actually never been published before. This is the first time fans are going to be able to read the grand conclusion of the trilogy. I should also mention that although the original publication date was set for April 30, the book should actually drop sometime in May. Not long now!

Those interested in the series should also check out the Lost Khokarsa website we’ve put together with the permission of Phil’s heirs. We’ve assembled a host of bonus materials that you can’t find anywhere else, such as the Khokarsan syllabary and glyphs and the original hand-drawn maps from Phil’s notes. You can find the website here:

Thanks Christopher! And you’re quite right, my description of the book was sloppy. I’ve amended it above to make it clear that the third novel was co-written by you and appears here for the first time.

The Lost Khokarsa website looks terrific! I love the cover for EXILES OF KHO. What can you tell us about it?

EXILES OF KHO is a signed limited edition novella coming out later this year from Meteor House. The story is set in Farmer’s world of Khokarsa eight hundred years before the main series, and tells the tale of a heroine-priestess who’s sent away by a jealous queen on an expedition to the hinterlands beyond the Khokarsan Empire. Mike Hoffman illustrated the cover and has also done the interiors (which are absolutely stunning and are hanging over my desk to inspire me as I finish writing the story).

Meteor House is doing a really neat thing by only printing a small number of copies beyond the preorders, and also by letting me include a special acknowledgments page with the names of everyone who preorders the book by June 30. I’m really excited about that because these are the people who are making the book possible. You can check out EXILES OF KHO here on the publisher’s website:

You know, I used to call myself a Philip Jose Farmer fan back in the day and I’ve never read this series. Thanks for making me aware of this. It’s definitely on my to purchase list.