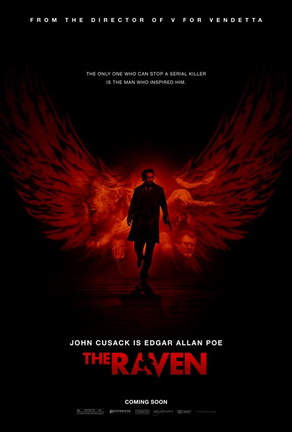 This is more of a funeral oration than a review: The Raven flew right into a car windshield this weekend and failed to crack either the windshield or the top five at the U.S. box office, instead pulling in a sad $7.2 million to flop down at seventh place. This coming weekend, Earth’s Mightiest Heroes will tread it into dust, from where its spirit will be lifted “nevermore.”

And that’s fine, because The Raven is a sad sack of a film. It’s bad, but instead of feeling resentful of the filmmakers, you feel bummed that their good intentions and concepts never gelled — and they were apparently quite aware of it. The Raven knows it isn’t good, and that’s the saddest part.

For a great U.S. author inexpensively reachable in the public domain, Edgar Allan Poe has always posed a puzzle for feature-length filmmakers. Poe predominantly wrote short stories and poetry (producing only one novel, The Narrative of Arthur Gordon Pym of Nantucket, which I always thought sounded like the start of a dirty limerick), and his tight construction and “unity of effect” philosophy of writing makes his work difficult to translate into a length of ninety minutes or more. Short stories often make superb material for feature films – the form is closer to narrative movies than the novel is – but Poe helped define the form with an economy of story, time, and place beyond the call of duty. When this combines with the intricacy and detail of Poe’s language, it puts any screen adaptors in a tough position. Most films with Edgar Allan Poe’s name in the credits are more homages to his work than straight adaptations.

The Raven, the third major film to carry the title of Poe’s most famous poem, takes the “loose inspiration” tactic, mixing the concept of previous fictionalized biopics like Kafka (1991) and Hammett (1982), where the author plays the part of the hero within a story similar to those he writes. However, I doubt either Steven Sorderberg or Wim Wenders were on the producers’ minds. They were probably thinking of the success of the recent Sherlock Holmes films and all the serial killer movies to come in the wake of The Silence of the Lambs and Se7en.

First, if you haven’t seen either of the earlier Ravens, they are definitely worth the time of any Poe or horror movie fan. The 1935 version (my detailed review) starring Bela Lugosi and Boris Karloff, is as sick and nasty as Universal horror films of the 1930s were permitted to get, and it delves deep into Poe-mania even if its only connection to the Poem is Lugosi reciting it and watching an interpretative dance choreographed to it. The 1963 Roger Corman film, starring the unholy trio of Vincent Price, Boris Karloff, and Peter Lorre, is a great horror-comedy about dueling sorcerers. Both Ravens are fine examples of how to approach Poe without doing a straight adaptation.

The 2012 Raven is how not to do it. A great idea on paper, up on the screen it is sadly an empty and unengaging exercise using Poe semantics. Its Gothic American shell is merely that: a shell. Nothing that feels like Poe has survived.

The Raven ’12 is cast as a detective story using a fictional version of Edgar Allan Poe (John Cusack) during the last days of his life, before he ends up expiring on a snowy park bench in Baltimore. (I seriously cannot think of a more depressing way to die.) Making Poe into a sleuth is workable because he invented the classic murder mystery with his stories of C. Auguste Dupin. In execution, however, Poe does very little detection, and the mystery in the film surrounding a killer who uses Poe’s stories as an inspiration for his crimes—including kidnapping his fiancée Emily Hamilton (Alive Eve) — unfolds in a series of dull scenes shrouded in visual darkness but no emotional darkness. The real sleuthing and plot heavy lifting comes from Detective Emmett Fields (Luke Evans), a forgettable figure. Brendan Gleeson is in there somewhere as well, with a surprising amount of nothing to do.

Hardly anything about The Raven works, not even its Gothic design, which feels more cramped and damp rather than oppressive and frightening. But the movie makes two large errors that crush anything good it might have summoned up.

First, it never emulates the sense of doom and tragedy of Poe’s work and the popular conception of his life. I called The Raven a sad film, but it’s “pathetic sad” from an external viewpoint. The film itself just imitates tragedy and gloom: stagy and artificial. This “shallowness of doom” is most damaging in what it does to Poe’s relationship to his fiancée, Emily. Or the complete lack of a relationship. Rescuing Emily from the mystery murderer is the crux of the plot, but damned if the film establishes anything between the two lovers before that. Actress Alice Eve projects Emily as “pretty” and that’s about all. Where is the romantic figure we hear about in “Annabel Lee,” Poe’s grand poetic tragedy and the last poem he completed? Just reading the poem out loud in the movie isn’t enough; for Edgar Allan Poe’s life to feel real on the screen, at least a bit of the emotion from that poem (and just about everything else he wrote) needs to bleed through. None does. Emily is a generic damsel in distress. 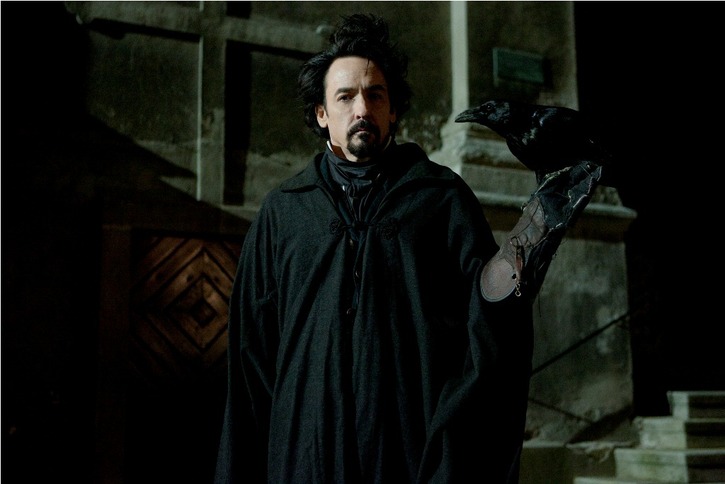 John Cusack doesn’t help matters. His Poe is a frustrating, gloomy Gus, not the tormented Gothic artist the movie wants viewers to see. When Poe first enters the story, arrogantly throwing himself around in a bar to bum a free drink, Cusack plays him like Robert Downey Jr.’s Sherlock Holmes. It’s amusing for a few minutes, but after that Cusack sort of clicks off, as if he decided playing Poe as if he were in an opium haze for the rest of the movie would cut it. I never believed for a moment that this man had a story in him like “The Fall of the House of Usher.” Hell, I don’t think this guy could have written “The Balloon-Hoax.” (Speaking of which, the killer should have used that story for inspiration. It’s a challenge, and much less obvious than burial alive.)

Second, The Raven has no suspense. And suspense is sort of, well, integral to Edgar Allan Poe’s work. In the first ten minutes, The Raven trots out its “Pit and the Pendulum” moment — and botches it spectacularly. The short story “The Pit and the Pendulum” works because it is filled with unbearable tension as the swinging blade descends with agonizing regularity toward the trapped man. The potential for something horrible to happen, our imagination of that moment when the blade slices through the body, is what makes the story such a masterpiece. Actually watching a blade gorily cut through somebody without build-up . . . who cares? Director James McTeigue mistakes gore for suspense, and that slays The Raven, which has not a genuine second of tension anywhere in it.

The poor handling of the “Pit and the Pendulum” set-piece haunts the film to the conclusion, and wow is the conclusion as dead as the people at Prince Prospero’s party in “The Masque of the Red Death.” The reveal of the killer is one of those, “Hum, so what?” moments that I can’t believe the screenwriters felt would work when they wrote it. (Maybe they didn’t; it’s difficult to tell who is responsible for the final product on screen in any film, but I hope this was a clumsy insertion from a suit without any creative background.) The ending is lazy, limp, and has no resonance whatsoever — and to compound it, a hasty coda tries to slap a more positive ending on it all, which manages to draw more attention to how terrible the ending is. 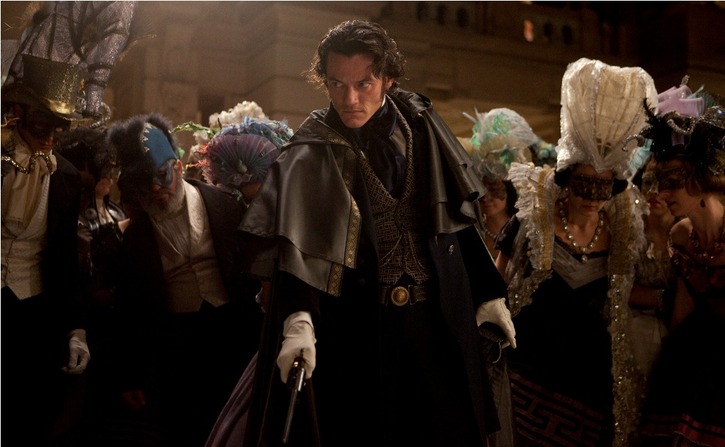 “The Masque of the Red Death” sequence is the film’s best, since it is quite beautiful to look at, and marks one of the few places where the film opens up a bit to strut its period designs. But the poor attention to suspense ends up killing this scene as well. The climax of the party needs to dazzle, since this moment drives the rest of the film, but . . . eh, that’s it? Blink and you’ll miss it. Don’t blink, you won’t miss it, but still won’t care.

Here’s a lingering curiosity I have about the film: why did the killer ignore Poe’s most famous short story, “The Fall of the House of Usher”? The killer does use burying someone alive as murder technique, but it is linked specifically to “Premature Burial.” “Walled up alive” from “The Cask of Amontillado” also appears, so maybe the killer thought that doing yet another living internment was going overboard. But . . . you picked “Premature Burial” over “The Fall of the House of Usher”? What’s wrong with you? I have to imagine this internal debate: “I can use either ‘The Black Cat’ or ‘Why the Little Frenchman Wears His Hand in a Sling.’ Hmmm, ‘Little Frenchman’ it is!”

Now that I think about it, “Hop-Frog” would have worked well: forcing somebody to wear an ape costume and then torching him while suspended from chains! (The wonderful Vincent Price movie Masque of the Red Death incorporates this moment into its action.) This is a much better murder method than the film’s terrible use of “The Facts in the Case of M. Valdemar,” which even the killer admits is stupid.

Ryan Harvey is a veteran blogger for Black Gate and an award-winning science-fiction and fantasy author who knows Godzilla personally. He received the Writers of the Future Award in 2011 for his short story “An Acolyte of Black Spires,” and his story “The Sorrowless Thief” appears in Black Gate online fiction. Both tales place in his science fantasy world of Ahn-Tarqa. A further Ahn-Tarqa adventure, “Farewell to Tyrn”, the prologue to the upcoming novel Turn Over the Moon, is currently available as an e-book. You can keep up with him at his website, www.RyanHarveyWriter.com, and follow him on Twitter.

Soon as I saw a trailer with Edgar Allan Poe with a gun in his hand, like every other modern “violence solves everything” American asshole, I wrote it off.

Yeah, Edgar Allan Poe in a gunfight! ‘Cuz that’s just what you want to see, right?

“Edgar Allan Poe in a gunfight! ‘Cuz that’s just what you want to see, right?”

It isnt a monkey knifefight…but I’ll go for that.

Just get rid of Cusack.

I lost whatever enthusiasm I might have had for the film as soon as the previews revealed that the story was going to be “author discovers his works are inspiring a killer”.
That’s a mighty weary trope to hand over to E.A. Poe. He deserved better.

Thanks, Ryan. Your reviews always spell out just what you see as right or wrong about a work with fine clarity.

I’ve a soft spot for Cusack (ever since Grosse Point Blank), and a great love for Poe’s stories (grew up on them), and I adore the Corman movie… but I’m really not going anywhere near this one.

Sad. Really not sure who thought anything in this was going to be a good idea. Even “Abraham Lincoln, Vampire Hunter” looks a better film prospect than this (though, um, not by very much).