In 1974 Lester Del Rey hit on the idea for a series of collections showcasing the best early SF writers in the field — especially those who had a publishing contract with his Del Rey imprint, naturally enough. The Classic Science Fiction line grew to roughly two dozen volumes, creating an essential library of early science fiction. It became one of the seminal SF series of my childhood, introducing me to such writers as C.L. Moore, Leigh Brackett, Edmond Hamilton, Fritz Leiber, Henry Kuttner, John W. Campbell, Philip K. Dick, Fredric Brown, Murray Leinster, Robert Bloch, Jack Williamson, and many others. James McGlothlin has been reviewing them at Black Gate. So far he’s covered The Best of Stanley Weinbaum and The Best of Frederik Pohl, two of the finest books in the set.

I always thought I had a complete collection, but just a few months ago I discovered there was a late entry — The Best of John Brunner, published fourteen years after the first volume in the series. How the heck did that manage to elude me for nearly 30 years? I scrambed to find one, and soon enough located a virtually new copy on eBay for just $4 — just five cents more than the 1988 cover price. It arrived a few weeks ago.

It has been a genuine treat. Brunner is one of science fiction’s finest 20th Century practitioners, and while I’m well familiar with his novels, I’ve discovered that I’m much less knowledgeable regarding his short fiction. In fact, while I haven’t finished reading it, I’m pretty sure I’ve never read any of these stories before. 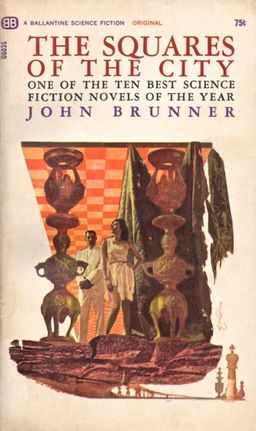 The Best of John Brunner has an introduction by Joe Haldeman, who writes:

In the early sixties, Brunner was ready to start writing something more challenging. As he says in a 1972 interview, “the depressing shallowness of much SF became apparent to me. The time of sheer wonderment at the infinite possibilities of applied technology was, in my view, over; the substantial theme that remained, and was primarily the prerogative of SF… consisted in the examination of the impact of technological change on the human personality.”

The first complex, challenging science fiction book Brunner wrote was The Squares of the City, a novel whose plot derived from the moves of a famous chess match. But five years passed before an American house picked it up (for a ‘derisory’ advance payment, according to Brunner), and despite a considerable success in America, the novel went unpublished in Britain until almost a decade after it had been completed.

In reaction to this equivocal situation, Brunner said (again, writing in 1972), “I have found it necessary to regard my writing as being divided into two categories: ‘ambitious’ and ‘fun-type.’

Haldeman describes the book that follows as “a smorgasbord, about equally divided between heavy fare and light.” 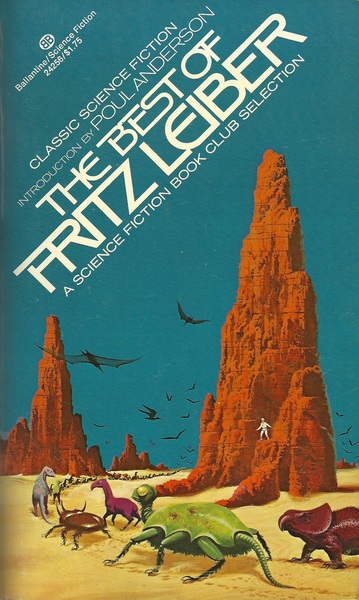 And we’ve covered the following volumes in the Classics of Science Fiction line (in order of publication):

The Best of John Brunner was published by Del Rey in November 1988. It is 288 pages, priced at $3.95 in paperback. The cover is by Barclay Shaw. It has never been reprinted, and there is no digital edition.

“How the heck did that manage to elude me for nearly 30 years?”

Well, it does have a vastly different cover from the rest of the series.

I’d been on the hunt for a copy of THE BEST OF JOHN BRUNNER for almost 10 years (I wanted to find it “in the wild” vs. buying online). Scored a copy early last year. A great collection, but I would quibble with the selection as “best.” Brunner wrote a ton of stories, nearly all of them good. In his lean-times in the mid-80s, he took on a lot of invitation-anthology work, much of it quite good (his THIEVES’ WORLD stories are top notch), with some clangers like his story in THE FLEET series.

Stephen, I’d buy the heck out of a Haffner Press Brunner book, anthology or novel. Redo Compleat Travellers in Black and I’m there!

Arin, I have a fairly amazing Brunner collection outlined in my dreams, but I have my doubts that it would be a good seller. If there were 598 more folks like you and me, then I would pursue it.

I know of several others who would be interested. Probably not 600, though. Smaller print run?

One of the panels that got axed in the final version of the WFC schedule was the one on the fantasy tales of John Brunner; and I was extremely sad to see it go 🙁

He’s long overdue for a rediscovery. I was pimping Shockwave Rider the other day, and still commenting on how completely relevant it remains!