The late Philip K. Dick (1928–1982), oftentimes lovingly called PKD, still fascinates many today. As evidence I point to the popularity of two current series on Amazon: The Man in High Castle, based upon Dick’s 1962 novel of the same name, and now Philip K. Dick’s Electric Dreams, an anthology show based upon various PKD short stories. And of course we just had the recent movie Blade Runner 2049, the sequel to the 80s Ridley Scott classic Blade Runner, based upon Dick’s novel Do Androids Dream of Electric Sheep? (1968). It doesn’t seem that PKD’s influence is going away anytime soon.

In this spirit I’m excited to discuss The Best of Philip K. Dick (1977), the ninth installment in Del Rey’s Classic Science Fiction Series. Science fiction writer John Brunner (1934–1995) wrote the highly appreciative introduction and the cover sports a new artist for the series, Vincent Di Fate (1945–), whose art style fits very well with the earlier classic covers of Dean Ellis and Darrell Sweet. Since this volume returned to a living (at the time) author, the afterword was by PKD himself.

PKD has always had something of a cult following. He is often associated with everything from classic science fiction, to cyberpunk and realistic futurism, to the drug culture of the 60s and 70s (thanks to a famous Rolling Stone article in 1975), and even with religious mysticism. There are countless books about Dick’s life and work, plus a multitude of documentaries, many of which are available online. 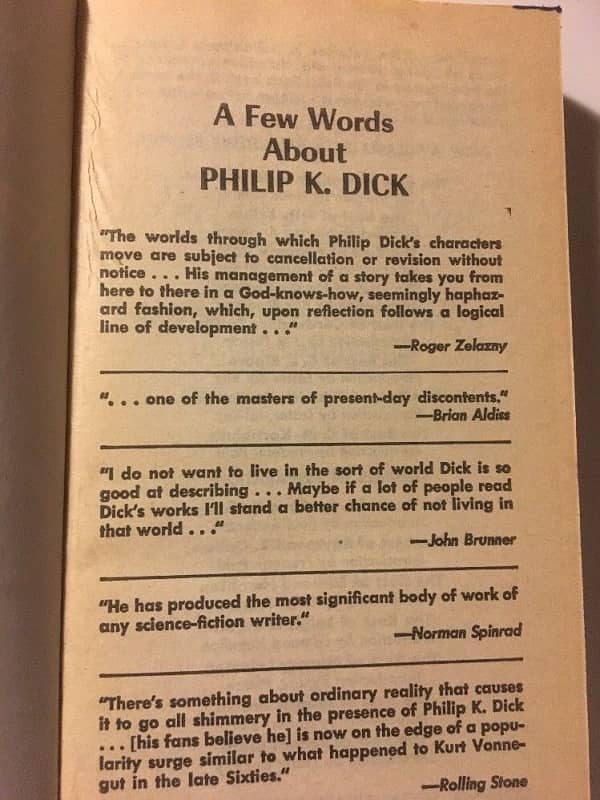 I am admittedly something of a PKD fan-boy (lovingly called “Dick-heads” in some circles). Though I have read several of his novels, I actually had never experienced any of his shorter fiction until this Del Rey volume. I was very pleased.

Philip K. Dick’s stories are quite unlike anything else I’ve read. I noted in my last review of The Best of Cyril Kornbluth that, of all the sci-fi writers that I had read, Kornbluth seemed the most interested in the human situation. It seemed to me that to Kornbluth, sci-fi tropes were only instruments to draw out what he took to be truly human. Similarly, PKD seems more interested in deeper issues. The wonders of space and futuristic technology are simply dressing for deeper issues related to metaphysics, epistemology, and even anthropology. 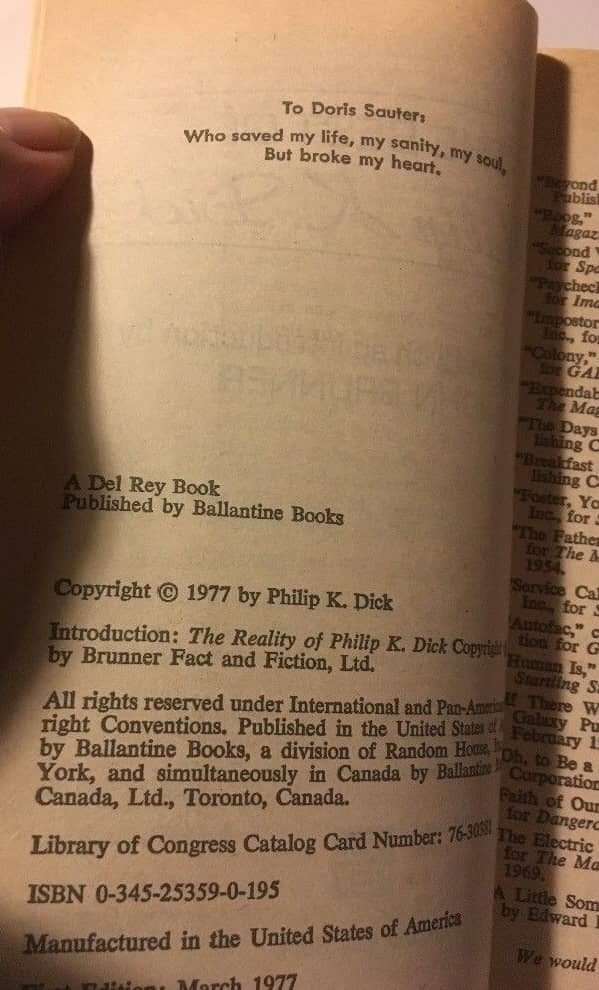 And some of his stories are just unclassifiably unique. What is really real? Do we really know anything? What does it mean to be human? The short tales in The Best of Philip K. Dick seem to have the same philosophical concerns that Dick demonstrates in many of his novels.

Even in his early stories you can see Dick asking questions about reality and our perceived knowledge of it. “Second Variety” is about a futuristic time where humans have developed robots to fight wars. But these robots have become too advanced, and it seems they’ve self-evolved to the point where they look human… and begin to hunt humans. This story sounded suspiciously like James Cameron’s Terminator movies. Wonder where Cameron got those ideas?

A similar story is “Colony” where inanimate objects become sentient and attack people on a planetary colony. Since almost any object has the potential to become dangerous, this story really heightens a sense of paranoia. Eventually we learn that they are actually alien creatures that can almost perfectly mimic any object. One could say the ending is a little ironic.

I mentioned the Amazon series Philip K. Dick’s Electric Dreams. I noticed that several of the episodes seemed to be based on stories in this volume, so I watched them. Updated to a contemporary audience, some of these episodes were excellent re-tellings of PKD’s original stories. “Autofac” concerns sentient factories that have gone rogue, and the Amazon adaptation was sort of an (ironically) Amazon-gone-out-of-control. Imagine a Terminator-Skynet scenario, but related to computers focused upon consumerism instead of militarism. Again, did James Cameron read PKD? At any rate, both the story and the television episode were excellent.

Some of the episodes were less successful. The short story “Father-thing” is a sort of horrific body-snatcher tale. It’s the closest to a horror story that PKD comes in this volume, and I enjoyed it very much. But the Amazon episode was less impressive. As the title suggests, your father may not be who you thought he/it was. 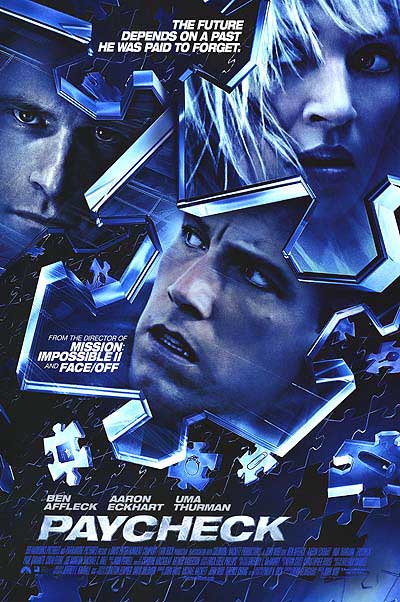 Many of PKD’s short stories play with the sci-fi trope of time travel. “Breakfast at Twilight” is about a family waking up to being in the middle of a future world war. “Paycheck” is about a guy placing items in the past so that when the present catches up to the future he can use these items for specific needs (did you follow that?) It was the basis for the 2003 Ben Affleck movie of the same name. Typical time paradox stuff is played with by PKD, which fits in well with his worries about what counts as real.

And PKD loves to poke at the question of what a human being is. “Human Is” is a great story of how an abusive husband returns from a space mission with a seemingly completely different personality, and for the better! We eventually learn that the husband’s soul has been downloaded and replaced by an alien entity. What does the wife do? I won’t spoil the ending, but PKD reveals who he thinks is the more clearly human of the two. 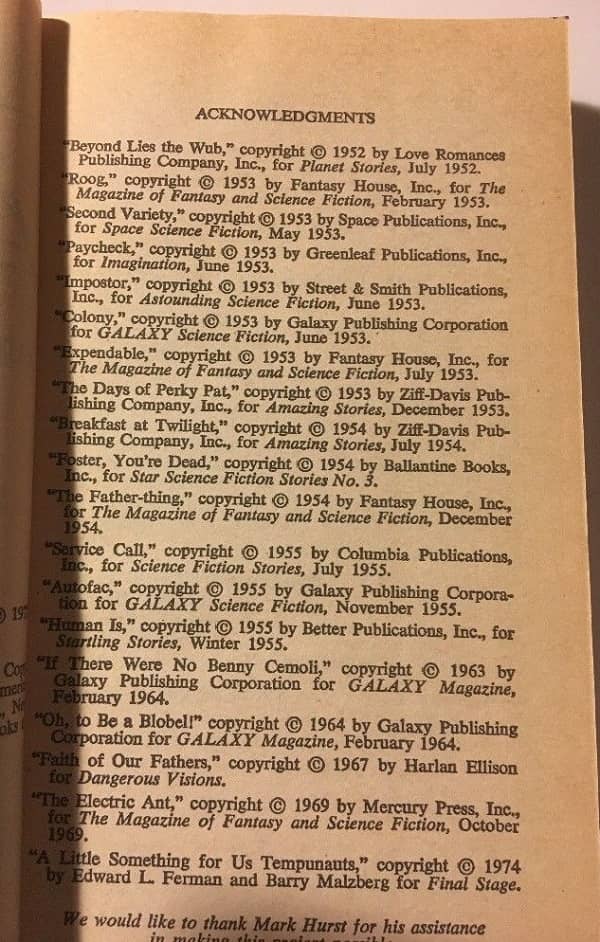 Dick also has some stories that are just simply hard-to-classify, but also eerily familiar. In “The Days of Perky Pat” Dick portrays a group of post-apocalyptic underground villages that center their lives around a sort of role-playing game called “Perky Pat” based upon something like a cross between Barbie and the board game LIFE. Since their post-apocalyptic lives are miserable, the small communities obsess over this game and building new accoutrements for Pat’s house and getting new accessories for Pat’s lifestyle. These games have a competitive component with betting elements. This may all sound quirky and bizarre, but in our day and age of people going to crazy ends for their collections and hobbies, this had a recognizable and frightening ring to it.

I find PKD endlessly fascinating. He approaches deep questions in interesting and entertaining ways. Even when his endings are less than happy, you find yourself either chuckling to yourself or inadvertently contemplating everyday assumptions about life. Perhaps the philosopher in me is overly stimulated. But I think Dick’s continued popularity shows that his questioning has more than an academic interest. 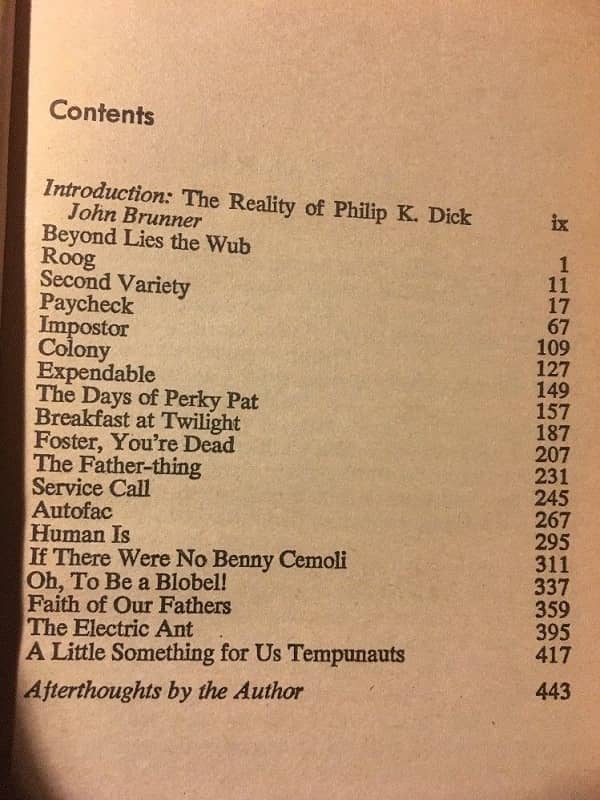 Here’s the complete Table of Contents for The Best of Philip K. Dick. 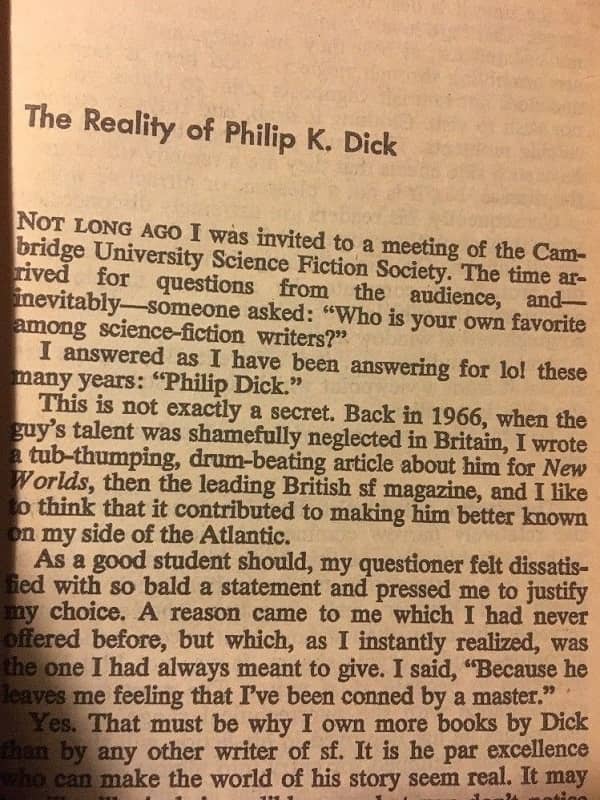 A nice overview of this volume and PKD’s work.

Thank you sir. I promise it was done with love.

Citadel Twilight did a collected stories in five nice paperback volumes. Some are still in print, some aren’t, but they’re not hard to get a hold of.