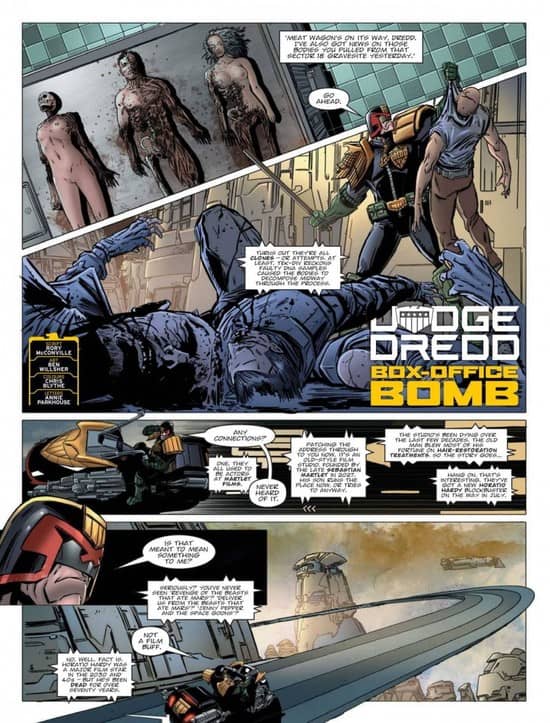 I’ve been reading 2000AD regularly for a few years now, and I noticed that more and more of the stories are being written by Rory McConville. First a Future Shock here and there, then a 3-part Tharg 3riller, and now multi-part Dredd stories. Since more than a few Black Gate readers are 2000AD fans, so I wanted to chat with Rory about his success and caught up with him online. Welcome to Black Gate, Rory!

Cheers, Derek. Thanks for having me! 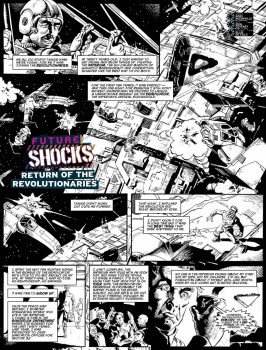 Your career path at 2000AD seems to perfectly follow the path of other writers and what Tharg himself recommends – first a couple of Future Shocks, and then gradually pitching larger and larger stories as you prove yourself. Now you’re writing multi-part Dredd, Devlin Waugh and Cursed Earth Koburn stories for both 2000AD and the Megazine. Is that how it felt to you? Or does the route only look straight from the outside?

Yeah, there was definitely a sense that I was moving up the rungs. As far as I remember, it started with the Future Shocks. Then after about my third one of those, I was asked to pitch a Tharg’s 3riller, which then led to a Tale From The Black Museum, which is a Tales From The Crypt style story centered around an object from Mega City One’s Black Museum. Next was the Cursed Earth Koburn story and then onto Dredd. 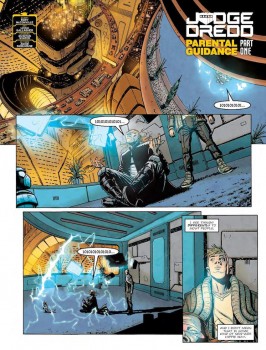 Pitching to editors seems so different from actually just sitting down to create with words. Were you a natural at pitching stories, or was that another skill you had to learn?

I wouldn’t consider myself to be a natural at pitching, but I’ve made sure to practice a lot over the years. I actually got my first commission from 2000AD by pitching in front of a panel of judges and an audience at the Thoughtbubble Pitchfest. That was a nerve-wracking experience, but thankfully worked out. 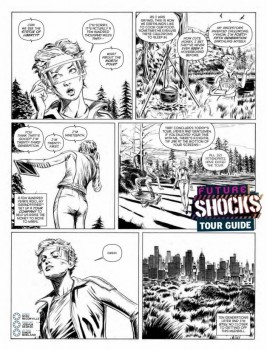 2000AD is known for its funny violence or violent humor. Your one-shots seem like a good match for 2000AD with endings with characters unfortunately getting what they asked for (Tour Guide), characters being ground down by the world (Commuter Pain), bad people getting a kind comeuppance (The Death Watch, Integration, Terminal), and bad guys just lucking out and winning (Alt-Life). How did you approach getting the thematic voice right for 2000AD?

I think there’s a big crossover between a lot of my interests and 2000AD’s particular brand of dark humor. I also make sure to read a lot of 2000AD regularly. This is usually more for research purposes so I can make sure I’m not retreading old ground.

There have been so many Judge Dredd and Future Shock stories over the years that it becomes an increasing challenge to make sure you’re not repeating the old stuff. Invariably, re-reading lots of 2000AD helps get you in the right frame of mind for writing it as well. And if I ever wander off track, Tharg is always there to give me back to the right direction. 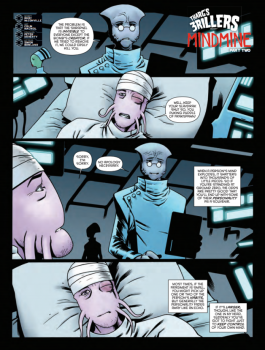 Previous 2000AD creators who have gone onto long-form comic book work in the US talked a lot about how 2000AD taught them to write dense, compressed stories. Tour Guide had 27 panels, and Alt-Life and Terminal 25 panels each, all in 4-page stories. Your Dredd work averages a little less panels per page. Is this need for density easier or harder for you as a writer?

Christ, I didn’t realize it was that many — those poor artists.

I think I’m naturally inclined towards a certain level of dense storytelling which stretches back to producing my own comics (to be blunt when you’re paying artists to draw stories for you, you have to figure out the best way to tell your story in as few pages as possible for the sake of your bank balance). 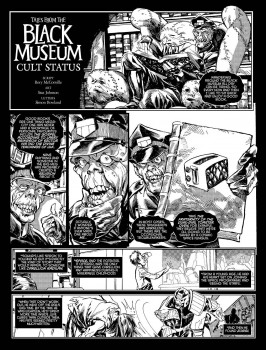 The only time it’s ever really an issue for me is if I try to squeeze too much in — be it panels, ideas or captions — and risk suffocating the story. It’s about figuring out the correct balance for each particular story.

Generally though, I think it’s important to be able to write dense stories because with comics, you will never have enough space and it’s typically easier to expand a story than shrink it down. It also teaches you a lot about the form. Future Shocks in particular are great for giving you an understanding about the economy of space on a page and pacing.

In terms of panels, Dredd’s generally average a bit less since the episodes are a bit longer and you don’t have to squeeze quite as much world building in as you would for other stories. The funny thing is when you’ve become used to working in four page chunks, even just getting an extra two pages feels enormous.

I remember Cursed Earth Koburn — the first full-length series I did for 2000AD — was roughly 45 pages which felt like an ocean. I think it can be creatively beneficial to move between all the different episode lengths because it makes sure you don’t get too comfortable in one particular format. 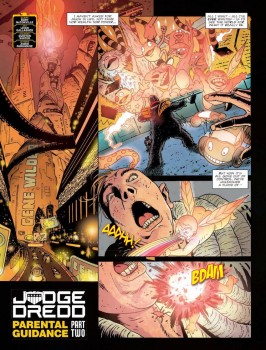 You’ve reached a level of writing regularly for one of the UK’s biggest books, playing with their toys, which is huge. Are there other characters at 2000AD or elsewhere you’d like to work with? Or your own worlds you’d like to create? Where do you see yourself in the comic industry five or ten years from now?

In 2000AD, I’m pretty happy with the ones I’m working with at the moment. Elsewhere, The X-Men have always been a big draw to me.

In five years and ten years, I’d hope to still be writing in comics in some form. I’ve been talking to a few American publishers about projects so we’ll see how it goes. I think it’s creatively healthy to maintain a balance between work for hire and creator-owned projects, so that’s also a priority in the immediate and long term future. 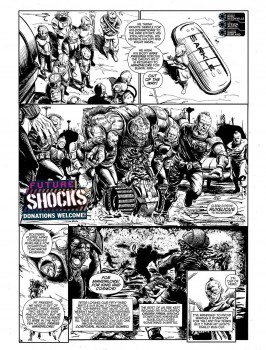 I’m with you on The X-Men. They’re my first comic love! Thanks so much for taking the time to chat, Rory!

Thanks for having me, Derek!

If you want to see Rory’s work, he’s appearing regularly in the weekly issues of 2000AD and in the monthly Megazine.

Derek Künsken writes science fiction and fantasy in Gatineau, Québec. He’s appeared many times in Asimov’s and Analog magazines, and his first novel, The Quantum Magician, will be released in October from Solaris Books.

Judge Dredd Megazine #399 came out today in Fairborn Ohio and lead Dredd story was by Mr. McConville. I hope this taken as a compliment but without reading the credits I would have taken this as another John Wagner story. I have always been pleased that 200 AD takes the trouble to keep Judge Dredd on track and evolving and consistent. The day they begin to experiment with reboots and do-overs it will be the end of the magic.