Lester del Rey was born in Minnesota in 1915 and died in 1993. One of his boldest fictions was claiming that his full name was Ramón Felipe San Juan Mario Silvio Enrico Smith Heathcourt-Brace Sierra y Alvarez-del Rey y de los Verdes, when it was actually Leonard Knapp. However, it was his other fictions, beginning in 1938 for Astounding, and his work as an editor, a reviewer, and in a literary agency, which resulted in his being made a Grand Master by the Science Fiction Writers of America in 1991.

While he was active in science fiction until near his death, he never collected anything published after 1964 and published very little of his own fiction at all after 1971, the year he married Judy-Lynn Benjamin. She became an editor at Ballantine Books, later joined by him, and created the Del Rey imprint. In the meantime, it was this publishing house which began the Classics of Science Fiction (“Best of”) series, the eighteenth of which was devoted to Lester del Rey, himself.

In his afterword del Rey says, “I love robots,” and that comes through in the number of stories in The Best of Lester del Rey that feature them. The most famous is “Helen O’Loy,” which was selected for the SFWA’s “Science Fiction Hall of Fame.” In it, Dave is a robot repairman, Phil is an endocrinologist, and Lena is a robot who develops a glitch and is worked on until the two friends decide to equip a new model with emotions. When Phil is called away on business and Helen imprints on some fiction and on Dave, the situation becomes complicated. The quiet twist at the end adds a deep layer of pathos which is a feature of many of del Rey’s stories. This might be read today as a sexist tale about gender, and some casual attitudes expressed in it could be seized on as confirmation, but it’s really a story about the nature of humanity, our emotions, how they might be emulated, and how humans might respond to the “spiritual” (or differently mechanical) despite biology. Published before Heinlein and technically “before the Golden Age,” it is nevertheless written in a direct style which efficiently backgrounds numerous then-futuristic elements to flesh out its foreground, and is effective. 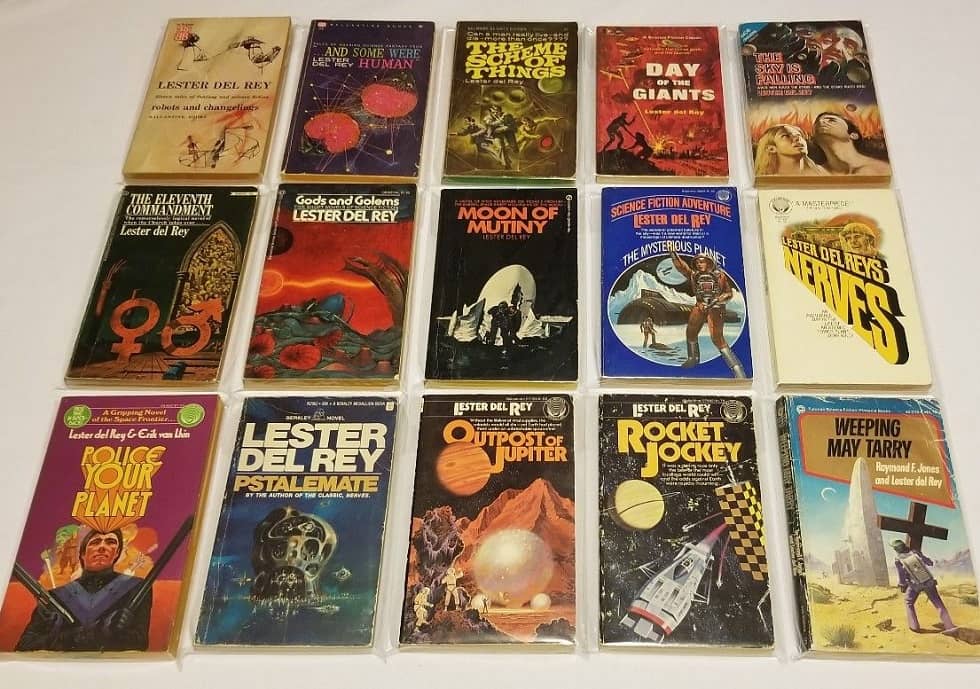 “Instinct” is another clever robot tale, in which a robot is seeking to recreate humanity after we’ve extinguished ourselves despite the fears of some robots that this is unwise. The twist is as clever as the bulk is engaging and, while enjoyable overall, the problem is that the bulk seems too bulky for that twist in retrospect. Less successful are “Into Thy Hands” and “The Monster.” The former is an almost Simakian and almost allegorical version of a robot’s amnesiac existential crisis after a human apocalypse and, among many problems, relies on one of del Rey’s weaknesses of convenient or coincidental plotting when the robot happens to witness an isolated fragment of a film of Genesis and tries to decide if he’s Adam, God, or the Serpent. Similarly, while not exactly a robot story, the latter is a thriller about another amnesiac that reads like lesser van Vogt. 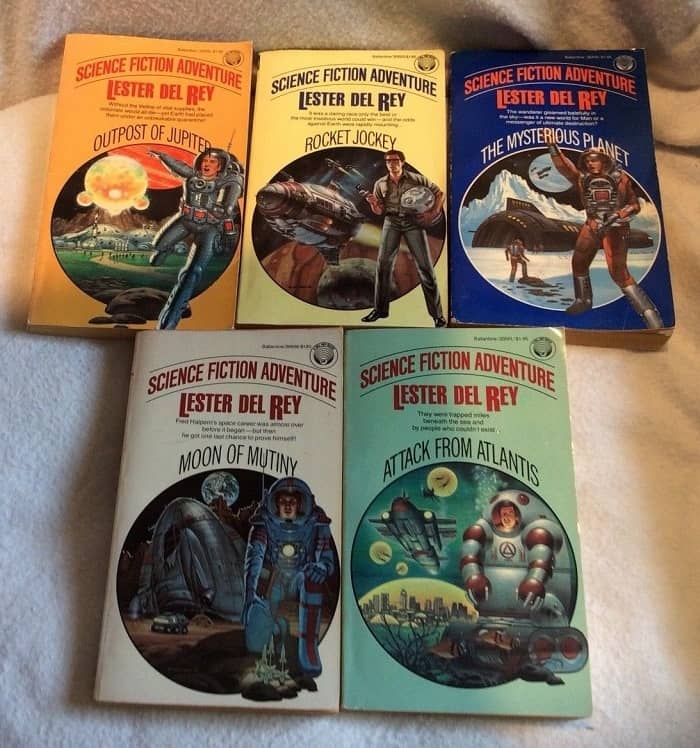 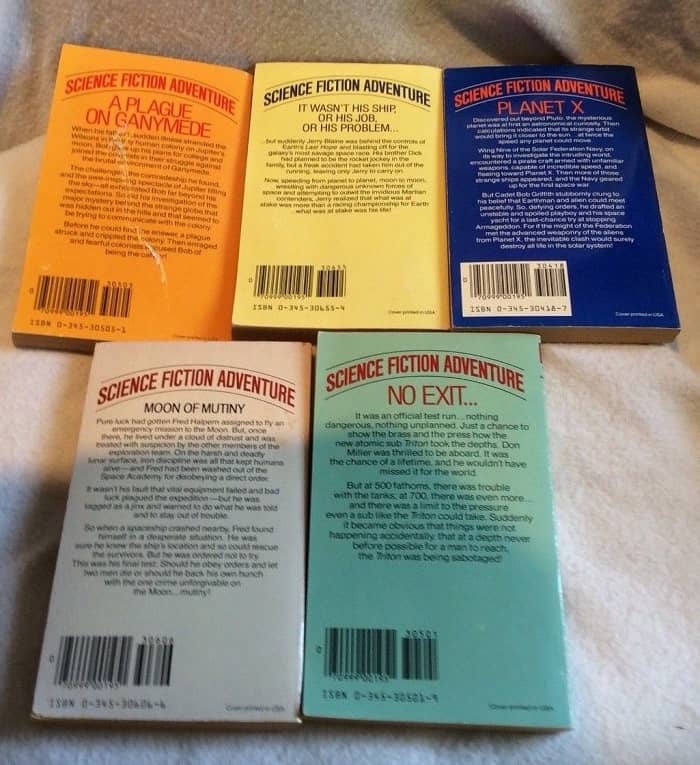 Another favorite motif of del Rey’s is God, religion, and the mentalities for or against them. “Superstition” is a decent tale which involves a starship captain trying to unravel the mystery of a planet’s “god” when part of his starship is snatched away from a war and brought to a planet many, many light-years distant. Aspects of this are reminiscent of Sturgeon’s “The Skills of Xanadu” and the revelation has some pulpy charm, though the story is marred by an excessively cartoonish narrow-minded psychiatrist. 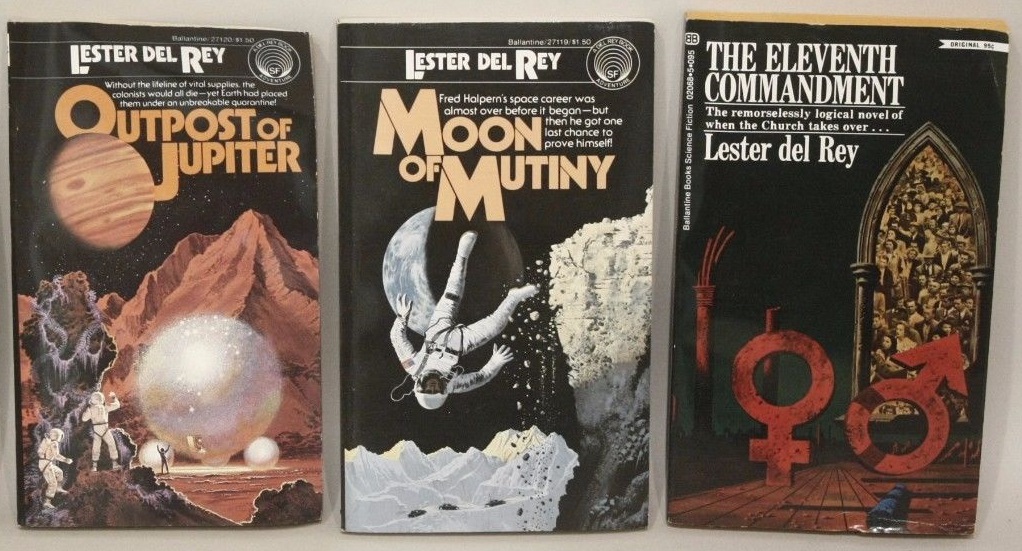 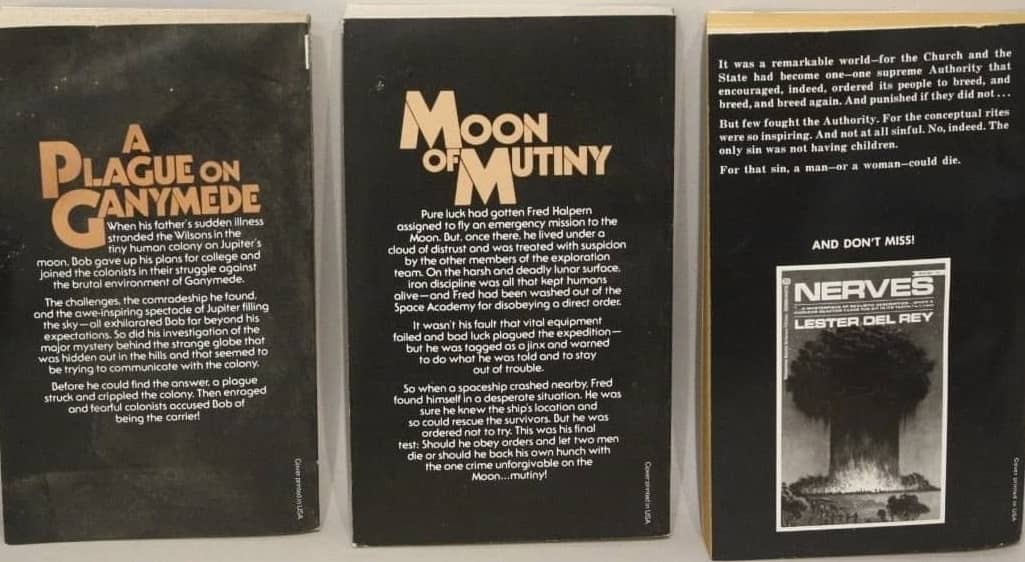 Far superior are “The Seat of Judgment” and “For I Am a Jealous People!” The former is an astonishing tale from 1957 which involves the titular form of punishment which is almost incomprehensibly horrible, incestuous group sex, and fairly explicit alien sex. An old colonial official of a decaying Earth empire returns to a planet of green marsupials, where he’d been instrumental in averting a religious uprising a generation before, and is tasked with repeating his feat. Despite the natives only having goddesses, a male prophet has arisen and the priestess and the official work together (the latter somewhat unwillingly) to deal with him. The twist to this tale is truly brutal and the whole is fascinating from multiple angles which include personal, historical, social, and religious. “Jealous People” is another remarkable tale of religion. Rev. Amos Strong and Dr. Alan Miller are friends despite the latter’s atheism and the two friends go through a vicious and multi-faceted ordeal when aliens invade Kansas. The two friends are nicely characterized individually and together and the Reverend’s quandary about what to do when God is not on our side is compelling. His ordeal rivals Job’s and some may find it excessive but others will find it seizes them and won’t let go. 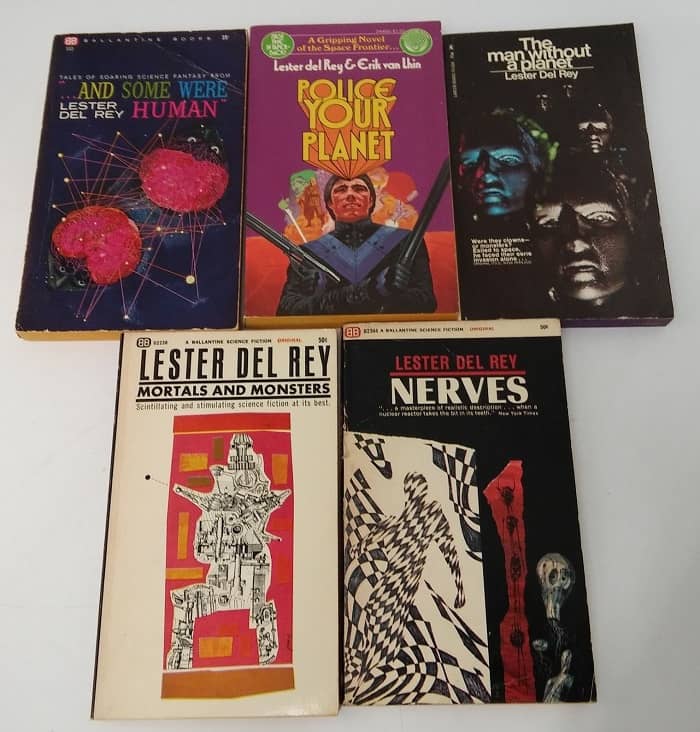 “Vengeance Is Mine” is the final story in the collection, the one illustrated on the cover of the original paperback, and the one which ties the motifs of robots, religion and man together. War is supposed to be a thing of the past, yet mysterious war tensions cause the humans to abandon their lunar base, leaving Robot Twelve, Mark One (Sam) alone, awaiting their return. When he awakens after thirty-seven years, he decides he’s waited long enough and modifies a spaceship to take him to a space station which is uninhabited, so modifies another to take him to Earth. He finds that it has been depopulated in horrific ways, though he does eventually meet up with a Mark Three robot (Joe) and the last surviving man (the boss of the moon colony) shortly before that man’s death. The two robots decide humanity must have suffered a War of the Worlds-like fate, so use a factory to create more of themselves to spread throughout the galaxy to avenge Man. After centuries of encountering peaceful or non-technical races who marvel at both robots and their religion of Man, Sam comes to understand something ironic about it all.

“Vengeance” includes a “last man” and del Rey observes that “there is an automatic element of drama and strong feeling attached to the last of a kind.” A second group of stories focuses on that. “The Day Is Done” depicts Hwoogh, the last Neanderthal, uneasily coexisting with the Cro-Magnons who are replacing his species. Keyoda is a crippled Cro-Magnon who lives with him and Lagoda is her nephew and a priest who both kindly and condescendingly bestows charity on them. Hwoogh is well characterized, the interrelations are unusual and convincing, the sentiment is effective (though some may find it mawkish), and it speaks to both large and small scales as Hwoogh is both a member of an old species and an old man.

“The Keepers of the House” (about a modified dog trying to find humans after an apocalypse) is another tale which evokes pathos but is insufficient in many ways, especially in plot. “The Years Draw Night” is an intriguing story in that its malaise can seem overwhelming or can be seen as painting a sunset as effectively as “The Day Is Done.” In this, a Martian spaceport is dusted off to prepare for the return of the last overdue starship as all others have already reported that the galaxy is as uninhabited as the solar system. The conception of that solar system is notably modern and its pessimism is akin to Edmond Hamilton’s “What’s It Like Out There?” It can be read as an almost nihilistic piece but it can also be seen as an emphatic statement on the importance of frontiers and growth to ward off ossification and death. “The Wings of Night” deals with two humans (one with imperialist urges and contempt for other species and one who sees things differently) meeting the last example of a strange lunar race when they make a forced landing on the Moon. Without spoiling specifics, this shares the elegiac tone of the others but differs in a key way.

“And It Comes Out Here” is the only time travel story in the book and is a dandy one for people who don’t generally like time travel stories. Harlan Ellison picked del Rey to lead off Dangerous Visions for mostly personal reasons but stories like “Seat” show that he belonged there as this one does in a different way. Contrary to del Rey’s usual direct narrative style, it’s written in second-person present tense, not because del Rey didn’t know any better, but for an aesthetically valid reason, which becomes clear as the story progresses. The story is utterly logical and utterly preposterous. It’s pointless, which is its very point. 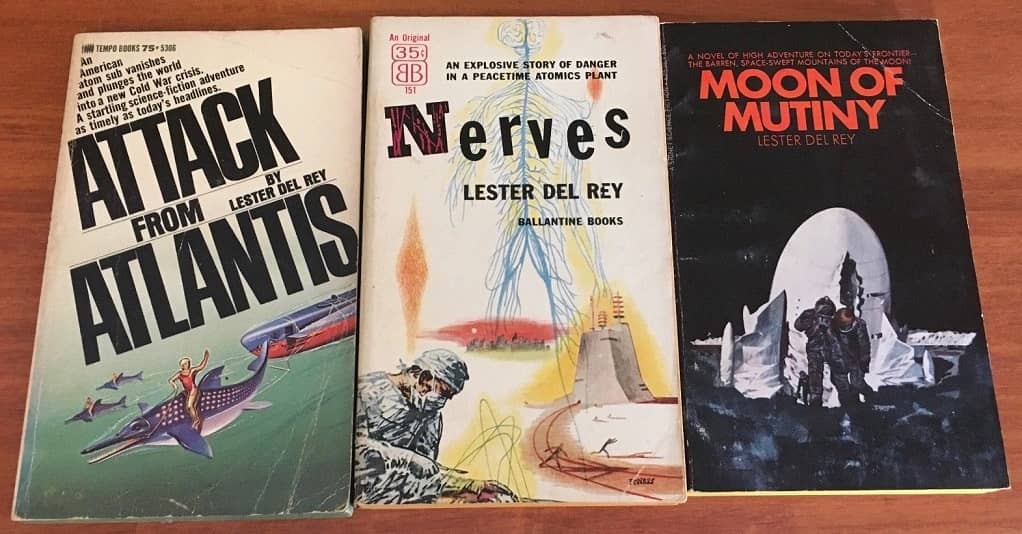 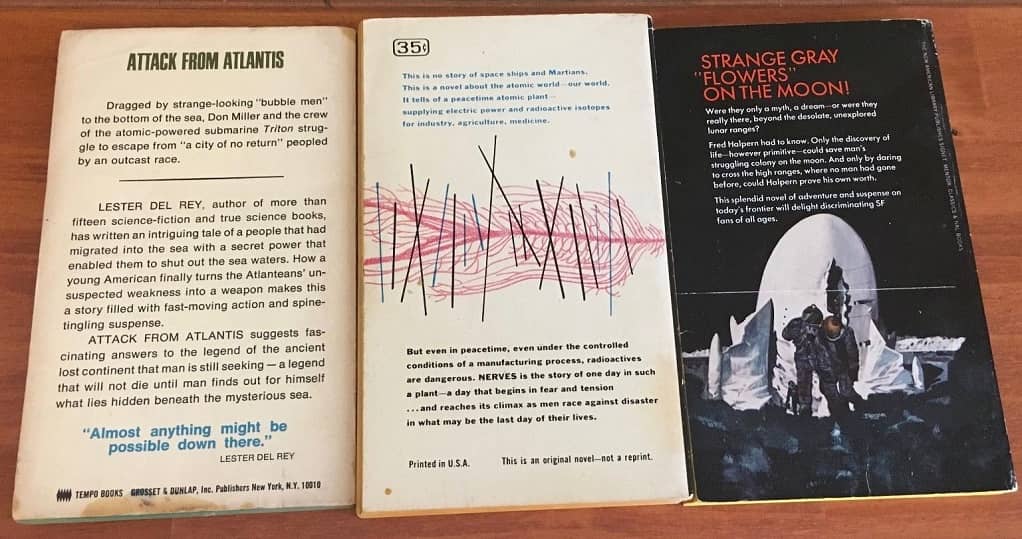 The last cluster of tales are a few rare fantasies. The market conditions of the time strongly favored science fiction though, in Early Del Rey, del Rey expressed (surprisingly, to me) that he actually prefers fantasy. Two of the fantasies come from John Campbell’s Unknown and the best is “The Coppersmith” which, amazingly, is a 1939 tale about an elf whose fellows have been put into a coma by pollution and addresses the concept of peak oil. Ellowan Coppersmith is a delightful character and the improbably charming townsfolk also help make this a winner. “Hereafter, Inc.” is a very different fantasy about a puritanical, masochistic, holier-than-thou man trying to avoid “eternal combustion.” He’s a little overdone even for this satirical type of story but it’s still somewhat entertaining (the part with the bee sneeze was the bee’s knees). Finally, the much later “Little Jimmy” is a sort of ghost story which devotes a little too much attention to the business and family minutiae of the protagonist and not enough to the “ghost” part.

I’ve read all the other del Rey collections published in his lifetime and I like a few stories that might or might not be exchanged with some of the lesser ones in here but, with one important caveat, this really does contain the best of Lester del Rey. It is also fairly representative except for perhaps underplaying some of his disdain for many aspects of modern life. The important caveat, though, is the omission of “Nerves.” Del Rey did a very creditable job of expanding it into a novel which is certainly why it’s not included here but the novel adds little and diminishes the incredibly powerful tension of the novella so, in addition to this essential volume, I’d really recommend seeking it out in The Science Fiction Hall of Fame, Volume IIA or another anthology.

The Best of Lester del Rey was first published in September of 1978 by Ballantine/Del Rey and that December in an SFBC hardcover.

Jason McGregor’s reviews of (mostly short) science fiction and fantasy have appeared on his own blog, Featured Futures, as well as on Tangent Online, Nerds of a Feather, and Black Gate.

Perhaps the easiest way to sample del Rey’s fiction is in the two volume Selected Short Stories of Lester del Rey that I edited for NESFA Press, comprised of War and Space and Robots and Magic, containing a combined half-million words of fiction.

Those are great volumes Steven — I should have snuck them in with the images! Thanks for the reminder.

Jason, Thanks for doing one of these “Best ofs”! I hope to see more from you. I’m working on The Best of Robert Bloch currently.

Thanks for the comment, James – I hope to do more. And ’tis the season for Bloch so that works out well!