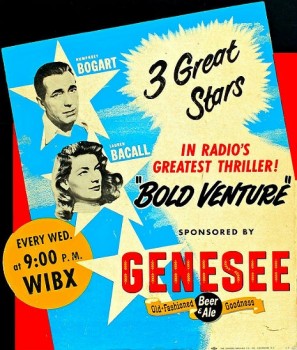 In 1951 and 1952, a radio series named Bold Venture was a syndicated radio show, under the aegis of Santana Productions. Santana, named after his boat, was Humphrey Bogart’s company, to create and produce projects he wanted to make; not beholden to a big studio like Warners. Bold Venture was notable because he and wife Lauren Bacall starred. You can listen to the whole thing here.

There is some confusion regarding some episode names, and the actual number of shows is uncertain. Their number seems to be between fifty-seven and seventy-eight, and it aired on between four and five hundred stations. There are fifty-seven existing episodes, of good recording quality. Frederic Ziv (see below) reported that all seventy-eight shows were made, per the contracts.

Bogie Bits – Santana produced seven films – six of them distributed by Columbia. Bogart starred in five, with In a Lonely Place the most successful, and critically acclaimed.

Bogart plays Slate Shannon, owner of a low-key hotel in pre-Revolution Havana. He also has a boat, the Bold Venture. Bacall is Sailor Duval, the Vassar-educated daughter of a good friend of Shannon’s. When her father had died, Shannon agreed to take her on as his ward. A romance develops between the two over the course of the series. They have adventures on land and on sea, inevitably crossing paths with criminals each week.

Bogart didn’t like doing network radio. He felt it was too much work for too little money. He enjoyed sailing, and his home life with Bacall. Frederic Ziv had achieved great success in putting together syndicated radio shows, competing with the networks’ offerings. Ziv had some scripts prepared and met with the Bogarts, who liked the idea, but they asked to record two shows, to see how it sounded. So, in stead of an actor auditioning for a radio show, a radio show auditioned for two actors!

Bogart explained why he liked the show’s concept: “I didn’t want the usual detective and his husky-voiced blonde. You know the type. There are at least ten or twelve on the air nightly every week.  After telling these two writers what I didn’t want, they came up with Bold Venture. It’s the sort of thing that kids will love – it’s a quick-paced adventure story for the entire family.  We’ve got some Calypso music in it because we don’t use any of the narrative stuff – and plenty of snappy dialogue – and we usually kill off someone every night

Bogie Bits – It took five days of prep work to record one 45-minute Lux Radio Theater episode. Bogart and Bacall could read several episodes of Bold Venture in a row. And Ziv took care of all the production work. This was a low-effort, good-paying show, and that’s what Bogart wanted. > 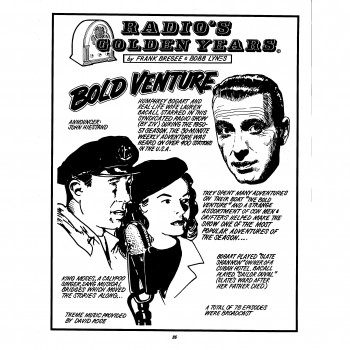 The show debuted in March of 1951, to good reviews. Bogart and Bacall were in Africa, Bogie making The African Queen. With Katherine Hepburn. They returned in September, and resumed recording episodes.

The accomplished musician Jester Hairston served as the hotel’s sidekick to both Slate and Sailor. He played native King Moses, and he sang narration, which was an interesting bit. Usually he provided information on the whereabouts of one, to the other. He was sort of a combination of Dooley Wilson’s Sam from Casablanca, and Hoagy Charmichael’s Cricket in To Have and Have Not

Bogart brought his tough-guy persona from the silver screen, and he seems to be a bit ungentlemanly to Sailor on a frequent basis. There is no romantic interest between them in the first few episodes, but it develops. Slate still has a wandering eye after that, though in a harmless way.

Bacall has the same type of snappy lines that fill her dialogue in The Big Sleep and To Have and Have Not. For me, she’s actually the best part of the show. There’s nothing wrong with Bogart, and he’s the one who weekly gets the pair out of trouble (though Sailor is no helpless maiden). And he plays Slate like, well, Bogart. Which is exactly what the listener wants. But Sailor’s character seems to have more depth, and the better lines.

Each week they are dragged into an adventure they were not looking for. They might see an abandoned boat out on the water, or rent the wrong tuxedo, or guests at the hotel may have nefarious motives. Slate and Sailor always encounter danger, and Slate gets smacked around more often than he would like.

The series kicked off on March 26, 1951, with Deadly Merchandise

Slate had received a wire from a man named Skarn to pick up some merchandise in Key West, and bring it back to Havana. Skarn doesn’t show up and they come back empty-handed. Slate is grumpy, and Sailor is tired of his complaining, which she listened to for the whole trip back. She tells him they had a nice boat ride together; that should be worth something. He’s not having any of it, saying it was time away from Havana. That leads to Sailor comparing it to a woman, and asks him what he says about her behind her back. He replies, “Walk ahead of me, and I’ll think of something.”

They come across a cock fight, which he wants to watch: she does not. A local named Mario accosts them as they are leaving, and he wants the ‘Yankee merchandise’ they went to Key West to bring back. They leave him, frustrated. I’m guessing he’ll be back.

King Moses is singing “If You want to Be Happy” when they get back to the hotel, and brings them food. He sings another song, telling Slade that a woman has checked in and is waiting for him. The show uses King’s songs to move the story along, which is kind of novel. 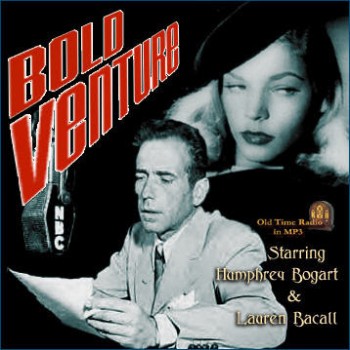 The woman approaches. Her name is Bebe and she too wants the merchndise that Slate did not pick up in Key West. She thinks he is holding out for more money and unhappily offers moreA bit later, Slate and Sailor are trading quips in the hallway outside Bebe’s room when they hear a rooster, followed by a woman’s screams inside the room. They go in and find that Bebe is dead, her face savaged by the rooster, which had steel claws on it, like those at the cock fight. Now, THAT is an unusual method of death.

When Bogart is cranky or annoyed with Sailor, he gets rude. He tells Sailor that she is a mess and a man needs to walk towards her to know she’s a woman. Not a problem Lauren Bacall had very often!

And, now, Mario shows up again. There’s a lot of activity in this show. He is conciliatory now. Bebe was his wife’s sister. The merchandise Slate was supposed to get was guns, for a rebellion on a nearby island. Mario and Bebe were part of it. He answers a knock on the door, thinking it’s a confederate. Nope – he gets gunned down.

Halfway in we’ve got gun running, murder by fighting rooster, and a guy killed when he opens a door. What’s on tap for the second half? Which kicks off with another narration song from King. Slate says it’s personal now, and they don’t call in the cops. They find an address in Mario’s papers, and head off to tell somebody what happened to him.

It’s his house, and there they find Mario’s wife, who has suffered a double loss. She already knew about her sister and she sends them to see Senor Etienne, who was involved in the rebellion. Off the pair goes, to a fancy house, where a concert is going on.

Etienne is a patriot, and presents himself as on Mario’s and Bebe’s side, but he doesn’t mind they were killed. He had brought the guns in secretly and will move forward without them. He forces Slate to smuggle the guns to their island, after which he will kill Slate and Shannon.

Mario’s widow shows up and kills Etienne. It turns out she (and her servant, Juan), are on the other side. She had her sister and her husband killed. And now she’s going to make Slate and Shannon jump off of a cliff, to look like a suicide.

Slate picks a verbal fight with Sailor, making Juan careless. Slate knocks it loose and Sailor grabs it. Slate grabs the woman while Sailor keeps the gun on Juan. They turn them in to the Havana police.

Back at Shannon’s Place, Sailor is all fixed up and they’re dancing. They aren’t a couple yet, but the sparks are there. The episode ends with Slate taking her outside to see how her hair looks in the breeze.

Ziv had up to four options for additional seasons, but Bogart tired of the project and he and Bacall opted out after one and a half seasons. Bogie won his only Oscar for The African Queen, which opened up more opportunities and created more time-consuming activities. And Bacall had their second child, daughter Leslie, in 1952, so he had two small children at home. Bold Venture came to an abrupt end.

In 1959, the show was turned into a television series of the same name, Starring Dane Clark and Joan Marshall, it only ran for one season, with thirty-nine episodes. William Conrad, of Cannon (and Nero Wolfe) fame, directed.

Bogie Bits – Conrad was Marshall Matt Dillon for the radio series of Gunsmoke. He wanted to continue the role when it was adapted for television, but he was deemed to be too short to play Dillon on screen. He was not happy about that.

I’ve never seen an episode of this show. I sometimes wonder if the radio and television show didn’t influence Adventures in Paradise, with Gardner McKay.

Anybody who likes Bogart and Bacall; or likes their version of To Have and Have Not, should be very pleased with this radio show. It’s easy to picture Bogie and Bacall on a television screen, acting out what you’re listening to. In fact, I can’t not do that. Listening to this series is like running a tv show in my mind. I quite enjoy it.