Frederik Pohl was something of a science fiction renaissance man. He was a fan, agent, publisher, editor (of both Galaxy and If magazines, from 1969-79), and multiple Hugo Award-winning writer. His career spanned over 75 years, from his first publication (a poem in 1937) to his last novel, All the Lives He Led (2011). He received the SFWA Grand Master Award in 1993. He died in 2013, at the age of 93.

Along with Asimov, Heinlein, Campbell and Wollheim, he was such an integral part of 20th Century SF that you can honestly say that without him, the field would have been dramatically different. Like Campbell and Wollheim, he was a taste-maker, a keen-eyed editor who loved discovering talent, and he won three Hugo Awards in a row as best editor. Like Asimov, he wrote extensively about science fiction, pointing many young readers (including me) towards the folks they should be reading, and enriching the history of the field with numerous non-fiction articles.

And like Heinlein and Asimov, he was hugely respected as a writer, winning numerous awards for his fiction, including a Hugo and Nebula Award for Gateway (1977), the John W. Campbell Award for the novella collection Years of the City (1984), and the coveted National Book Award for Jem (1979). In 2010 he won the Hugo Award for Best Fan Writer for his long-running blog, one of the earliest (and still one of the best) SF blogs, The Way the Future Blogs. He was a pioneer in the field to the very end.

I’m very fond of Fred Pohl. Like Asimov, he wrote about science fiction not as some higher and more enlightened branch of literature, but as a quirky business practiced by a small community of highly likeable individuals who shared common roots, and a common love of and fascination with science. It was that characterization, as much of my love of the stories itself, that filled me at a young age with an enduring desire to become an SF writer.

And, very much unlike Asimov, Pohl was a high-school dropout in a genre that celebrated hard science, and that gave him– critically, I think — a refreshingly different viewpoint on what science fiction could (and should) mean to the average reader. He was also a local SF writer, a fixture at the major Chicago SF conventions, and was just as delightful in person as he was on the page. He was an entertaining and self-deprecating writer, as you can see from the following excerpt from the introduction to his 9th collection, Digits and Dastards (1966).

There are three claim commonly made for science fiction… that it educates people to science, that it encourages young people to scientific carers, and that it predicts the technological advances of the future.

At the same time, inside every writer lurks the concealed sold of a pedant, and I will confess in public to a long-standing wish to teach something to somebody.

As a matter of fact, that’s why I wrote two of the pieces in this collection… It all began when five science fiction writers, myself included, were sitting around the cocktail table in Fletcher Pratt’s huge old home in Highlands, New Jersey, some ten years ago. Somebody mentioned binary numbers, and someone else said something about, “I wonder what a binary fraction would look like?” and some third person said, “How about decimal places?’… and it turned out none of us really knew…

In attempting to find out the answers to those questions so lightly raised, I became addicted to some of the twigs on that branch of mathematics called Number Theory, with special attention to binary arithmetic and to that most elegantly hopeless of mathematical recreations, the search for prime number theorems. But it turned out, a year or two later, that I discovered I finally did know the answer to most of the questions raised around the cocktail table. And as a quick survey showed that a lot of people did not, and as they seemed to be interested, I wrote “How to Count on Your Fingers.”

When it was published, in one of Bob Lowndes’ magazines, it drew in a huge amount of mail — more, I think, than anything else I ever wrote.

Pohl’s introduction to Digits and Dastards (click to enlarge)

Digits and Dastards is a fine book, and a solid example of the kind of thing that doesn’t even exist anymore — an inexpensive paperback single-author collection. I grew up devouring these things, and I wish readers today had the same convenient and inexpensive way to find short fiction from a wide variety of writers.

OK, fine. You’re right. Readers today have more ways to discover fiction from writers all over the world than we ever did. Top-notch magazines like Neil Clarke’s Clarkesworld, John Joseph Adam’s Lightspeed, and Lynne and Michael Thomas’ Uncanny all offer original short stories every single month — all online for free, and you don’t even have to leave your house.

I can’t even complain that I can’t enjoy inexpensive single author collections any more. I’m still collecting and enjoying ones I’ve never read before, and all for less than the cost of a brand new paperback. I guess it’s the best of both worlds, and I don’t really have anything to complain about. (You’re right, of course — that’s never stopped me before, why should I let it now??)

Here’s the complete TOC for Digits and Dastards.

Introduction by Frederik Pohl
“The Children of Night” (Galaxy Magazine, October 1964)
“The Fiend” (Playboy, April 1964)
“Earth Eighteen” (Galaxy Magazine, April 1964)
“Father of the Stars” (If, November 1964)
“The Five Hells of Orion” (If, January 1963)
“With Redfern on Capella XII” (Galaxy Science Fiction, November 1955)
How to Count on Your Fingers (Science Fiction Stories, September 1956) — non-fiction
On Binary Digits and Human Habits (The Magazine of Fantasy and Science Fiction, December 1962) — non-fiction

I actually first found this book in the UK edition, and I didn’t discover the US paperback until recently. Here’s the cover to the Corgi paperback, which may be more familiar to folks across the pond.

Digits and Dastards was published by Ballantine Books in June, 1966. It is 192 pages, priced at $0.50. The cover is uncredited. It was reprinted by Ballantine in 1970, and in the UK by Corgi in 1971. It has been out of print for the last 49 years, and there is no digital edition.

Wow, here is a Fred Pohl collection (with 2 math articles!) that I missed completely, even as it was reprinted during my prime sf paperback years of the 1970s. Thank you for the heads-up, Mr. O’Neill.

Sadly, Mr. Pohl’s blog seems to have disappeared from the Internet. But his entertaining memoirs, The Way the Future Was, are a bit easier to find on the ‘Net, albeit in used condition.

You’ve very welcome, Eugene! I hope you enjoy it.

> Sadly, Mr. Pohl’s blog seems to have disappeared from the Internet.

Ah!! I hadn’t realized that. Oddly enough, the site it still up, but all the content is missing?

Perhaps that means the content will return at some point? If it does, I hope the old links still work — like this page at MetaFilter, linking to many of Fred’s best articles:

> But his entertaining memoirs, The Way the Future Was, are a bit easier to find

They are indeed! After I wrote this piece I bought I used copy on eBay, and I’m waiting impatiently for it to arrive. I hope to report on it here when it does. 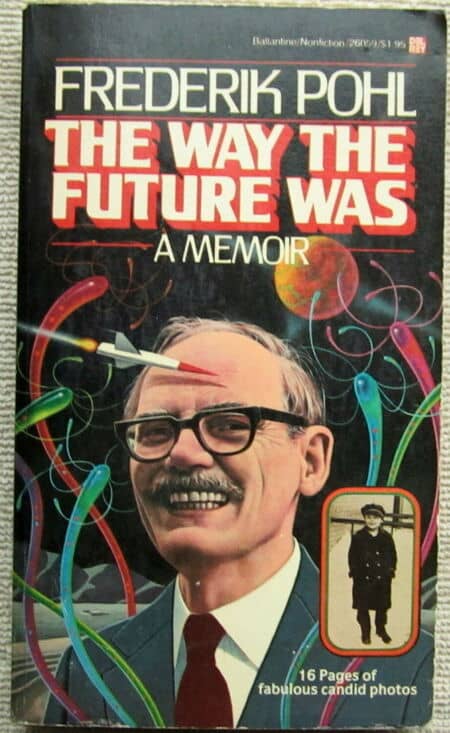