I know a lot of writers, and one of the reasons I hang out on Facebook is to find out what the heck they’re all up to. For example, this morning Rich Horton left this brief but intriguing update:

For the third day in a row, I have posted a Birthday Review compendium of reviews of older short fiction from an SFWA Grand Master. In this case, it’s for L. Sprague de Camp.

I checked out his blog Strange at Ecbatan, and sure enough, Rich has had a busy week. It started Monday:

Here’s my first Birthday Review is a while. (I’ve used up most of the birthdays!) This is a pretty significant one — Poul Anderson. He’d have been 96 today. This is a collection of reviews of magazine fiction (with one very late anthology story), including two serializations of a couple of his lesser known novels. And most of the stories here are not that well known either.

In a lengthy post, Rich reviewed 16 Anderson pieces from Super Science Stories, Worlds Beyond, Planet Stories, Space Science Fiction, Science Fiction Adventures, Cosmos, Galaxy, and many more. Here’s his thoughts on Anderson’s cover story for the May 1963 issue of Worlds of If (above left).

“Turning Point” is a neat little story. Kind of Cargo Cult in reverse. Humans come to an isolated alien planet, where the people apparently live primitive lives. But it turns out they are incredible geniuses, who simply never had the spur to develop technology. Once they see human tech, all bets are off.

Read Rich’s complete tribute to Poul Anderson here. Next up was the centenary of Frederik Pohl’s birth, which Rich celebrated with another lengthy review survey yesterday.

Back covers for Turn Left at Thursday and The Continent Makers

I like to read old short science fiction collections. This is one of the best ways to fill in knowledge of the field’s past. Fred Pohl is a very consistently readable author: Turn Left at Thursday is one of his weaker collections, but still readable throughout. The long bookend stories are a bit odd for Pohl, mainly in that they are very Campbellian in their heroic Men against the Aliens themes. “Mars by Moonlight” concerns a group of prisoners on Mars, who have had all memory of their crimes erased. The twist to the story is obvious, and the whole setup is horribly undermotivated. “I Plinglot, Who You?” is better, about a shape-changing alien who plans to trick the nations of the world to solving the problem of Earth’s population by starting a nuclear war. But the humans are smarter and especially more courageous than the aliens. OK stuff, nothing much. Better are a couple of the shorts, “The Hated” and “The Martian in the Attic”, which are neat setups with mordant endings. The others are lesser stuff. All very ’50s in tone.

Read his complete birthday coverage of Pohl — ten reviews of stories from Beyond, Galaxy, If, Cosmos, Analog, and others — here. 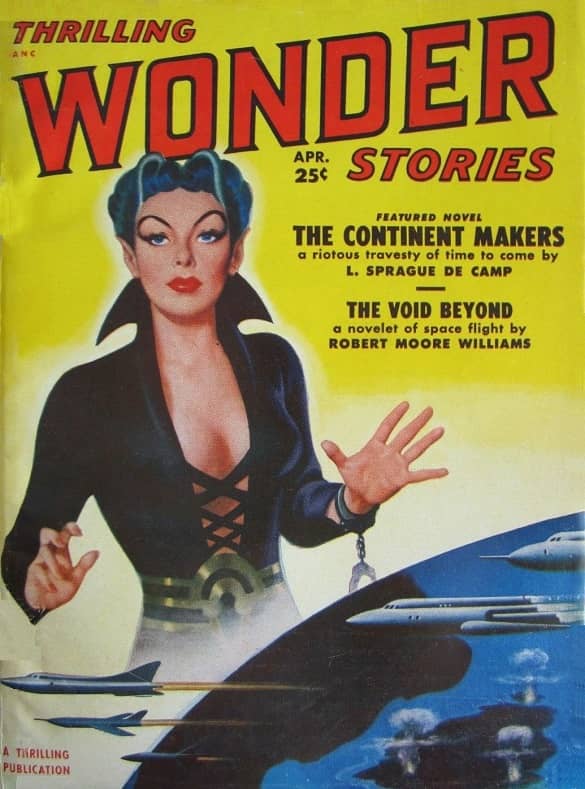 And finally, today Rich took a long look at the work of L. Sprague de Camp, on what would have been his 112 birthday. Here he is on “The Continent Makers,” from his review of the April 1951 issue of Thrilling Wonder Stories, published right here at Black Gate in 2016.

“The Continent Makers” is a bit shy of the Hugo and Nebula definition of “Novel” (40,000 words), but it’s plenty long enough that it might have been published alone in book form, or as an Ace Double half. However, it was instead chosen as the title story of a collection of Viagens Interplanetarias stories first published in 1953, and perhaps for that reason, it’s never seemed to me to get as much notice as some de Camp’s other work in that series…

Many of his VI stories concerned the planet Krishna. The natives are egg-laying and have antennae, but otherwise are remarkably human appearing and in fact most of the stories concern at some level sexual attraction between humans and Krishnans. Krishna’s technology is a couple of centuries behind Earth’s, and politically they are divided into a variety of often warring states with differing political philosophies — a lot like Earth, that is, except that by the time of de Camp’s stories there is a fairly strong world government.

“The Continent Makers” is sort of a Krishna story, in that two of the main characters are from Krishna, but they are visiting Earth. They are Jeru-Bhetiru and her fiance, Varnipaz bad-Savarum, who is studying Earth law in order to help him in his role as essentially Attorney General for a small nation on Krishna. The main human character is physicist Gordon Graham, who is asked to escort Jeru-Bhetiru, or “Betty”, around town while her fiance is away. Graham, of course, falls for the beautiful and habitually underdressed (by Earth standards) Betty immediately, and she seems to return the attraction, which is embarrassing when Varnipaz turns up. All is fine, though, as the Krishnans explain that marriage is purely a practical arrangement, having nothing to do with love, and anyway humans and Krishnans aren’t interfertile so where’s the harm?

This is really side issue to the main action, which begins more or less immediately with an attack on Graham. He and an unexpected ally, a World Federation cop, fight off the attack and Graham soon learns that the whole things has to do with a plot involving a project Graham has been assisting. There is a plan to set off some bombs under the ocean, causing a release of sufficient magma to form a new continent… It’s a pretty fun romp most of the way.

Read the full article at Rich’s Blog, and check out all of Rich’s article’s for Black Gate right here.

I have fond memories of The Continent Makers. In fact, I enjoyed most of the Viagens books. De Camp may have had his tongue deeply in his cheek while writing them, but he’s sharing the joke and the quiet amusement with the reader, not condescending to him.

I read a story about De Camp once. He was apparently notoriously devoid of a sense of humor, and the story tells of his attending an SF convention, pencil and notebook in hand, going around from room to room, group to group, listening in on conversations, and taking notes on anything that seemed to produce laughter, guffaws, groans, etc. When the curious asked what he was about, he explained about his innate absence of the ability to recognize what was funny and what wasn’t, and he wanted very much to know what made people laugh so he could include humor in his stories. I’ve read enough of his work to vouch for his success, to a limited extent; I haven’t fallen on the floor laughing, but he can be quite amusing, even funny, at times.