The Magazine of Fantasy and Science Fiction, November 1972; cover by Ed Emshwiller

In 1973 there was a tie for the Hugo Award for Best Short Story. (There have been several ties in Hugo history, perhaps most famously for the 1966 Best Novel, shared by Roger Zelazny’s F&SF serial “… And Call Me Conrad” and Frank Herbert’s Dune.) The winners were Frederik Pohl and C. M. Kornbluth for “The Meeting,” and R. A. Lafferty for “Eurema’s Dam.” This was the first fiction Hugo for each of these writers, and the only one for Kornbluth (not surprising, as he died in 1958) and Lafferty. Kornbluth did win a Retro-Hugo in 2001 for his 1950 novelette “The Little Black Bag,” and another posthumous award, the Prometheus Hall of Fame Award for The Syndic. Lafferty won a World Fantasy Life Achievement Award, as well as the Phoenix Award and two Seiuns for Best Story translated into Japanese (“Eurema’s Dam” and “Groaning Hinges of the World”). Pohl’s lists of awards is very long indeed: they include later Hugos for his novel Gateway and his short story “Fermi and Frost,” three Hugos as Editor of If, the Best Magazine winner in 1965-1967, Campbells for Gateway and The Years of the City, Nebulas for Man Plus and Gateway, Locus Awards for his memoir The Way the Future Was and his novella “The Gold at the Starbow’s End,” a late (2010) Hugo for Best Fan Writer, and of course he was named SFWA Grand Master in 1993.

Pohl (1919-2013) and Kornbluth (1923-1958) were regular collaborators from the earliest days of their careers – Kornbluth was not quite 17 when their first collaboration appeared. Their best known collaboration, of course, was the novel The Space Merchants (1953, serialized as Gravy Planet in 1952). Other novels included Gladiator-at-Law, Search the Sky, and Wolfbane. Their short fiction collaborations are a different story – there were a number of early stories in 1940-1942, then only one more short piece during Kornbluth’s lifetime. But after Kornbluth’s tragically early death (apparently while hurrying to catch a train to interview for an editing job with F&SF) his widow gave Pohl his notes for several unfinished stories. 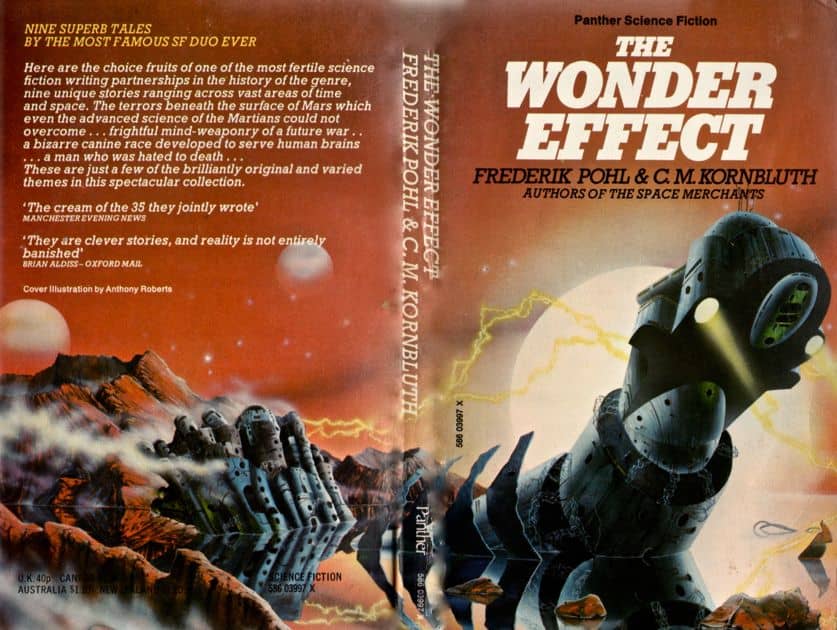 It’s not at all clear how detailed those notes were, but Pohl fairly quickly finished a half-dozen or so stories, many of which were collected in the 1962 book The Wonder Effect. (I suspect much of Pohl’s motivation at this time was to help Mary Kornbluth financially.) Curiously, about a decade later three more collaborations appeared: “The Meeting,” “The Gift of Garigolli,” and “Mute Inglorious Tam.” (Those last two stories were important to my early magazine reading – “The Gift of Garigolli” was in the first issue of Galaxy I ever bought, and “Mute Inglorious Tam” was in the third issue of F&SF I bought.) My suspicion is that the first set of posthumous collaborations were Pohl finishing stories on which Kornbluth had already done a lot of work, and the last three were Pohl fleshing out skeletons of stories, maybe just ideas for stories. At any rate, eventually most of the Pohl/Kornbluth collaborations were collected in two volumes – Critical Mass (1977) comprised the posthumous collaborations, and Before the Universe (1980) featured stories from the early ‘40s. 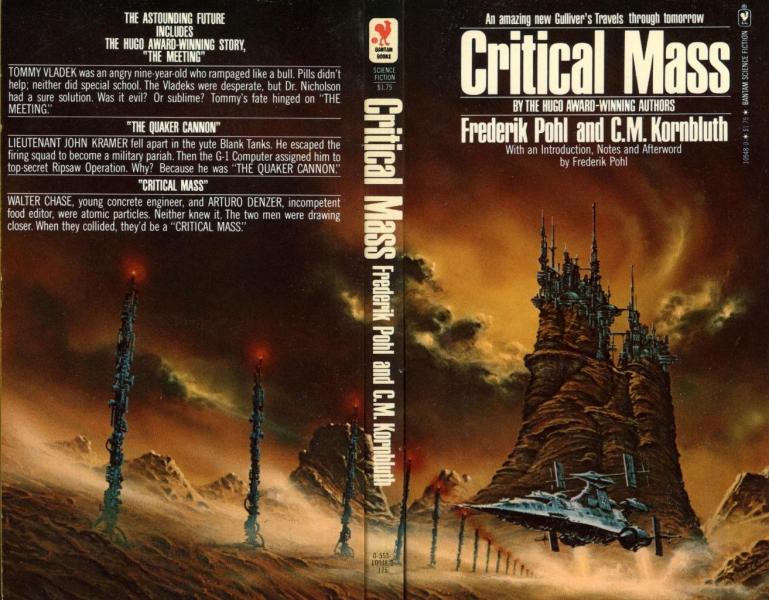 I reread both “The Meeting” and “Eurema’s Dam” in my copy of Terry Carr’s The Best Science Fiction of the Year #2. Carr’s book also includes such brilliant stories as Joanna Russ’ “Nobody’s Home,” James Tiptree, Jr.’s “Painwise,” and Gene Wolfe’s incomparable “The Fifth Head of Cerberus.” (I was also intrigued to discover Naomi Mitchison’s “uplifted raven” story, “Miss Omega Raven” – I wonder if John Crowley knows this story.) “The Meeting” first appeared in the November 1972 issue of F&SF, and “Eurema’s Dam” appeared in Robert Silverberg’s New Dimensions II. 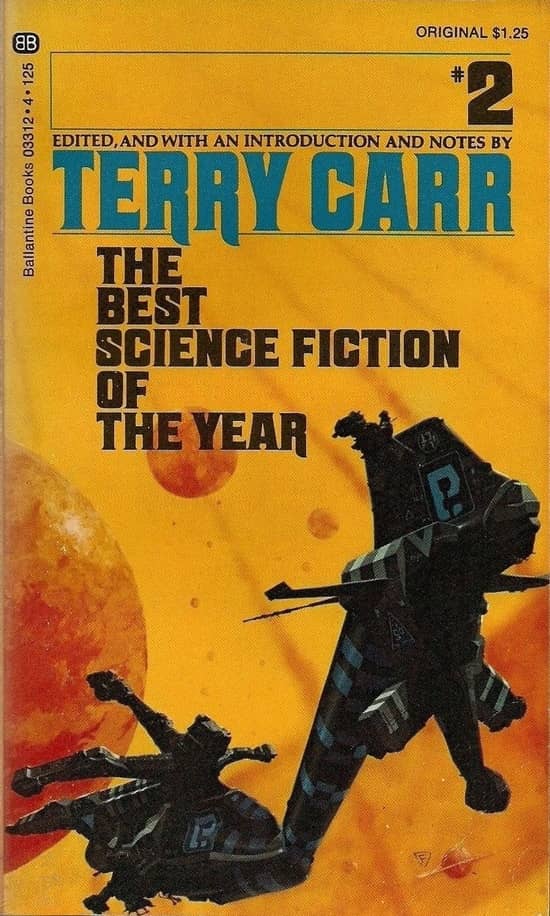 The Best Science Fiction of the Year #2
(Ballantine Books, 1973, cover by Chris Foss)

“The Meeting” is a very simple story, really, set not far in the future. Harry Vladek is shown attending a parent-teacher meeting at his son’s school. This is a school for “exceptional children” – that is, children with special needs. We are given a portrait of the trouble Harry and his wife are having with their son Tommy, and that that some of their fellow parents are also having, and a portrait of a bit of mild optimism in that this new (and expensive) school does seem to be helping Tommy – a bit. Just a little bit. On coming home his wife reminds him that a certain Dr. Nicholson has called, and urgently needs Harry to call back, with a decision. We soon gather that the decision concerns whether to allow Tommy to be the subject of a brain transplant – another boy is dying, his brain is perfectly intact, but an accident will soon kill him. Harry and his wife will get a new brain for their child… but, of course, their child is not dead, and his brain, while decidedly not working very well, is not dead either. That’s pretty much the story, and as such it’s pretty effective, though ethically there doesn’t seem to be a choice. (The brain transplant would be murder, of course.) But the depiction of the Vladeks’ despair is effective.

R. A. Lafferty (1914-2002) was one of the most individual of SF writers. He began publishing in his mid 40s, with much of his early work appearing in Pohl’s magazines (Galaxy and If). His primary mode was the “tall tale,” and he attracted attention with the stories that appeared in his first collection, Nine Hundred Grandmothers, and then with his early novels, such as Past Master, Fourth Mansions, and The Devil is Dead. He appeared regularly in magazine and anthologies for a couple of decades, after which his work, which had either outworn its popular welcome or become too individual for a wide audience, mostly appeared in small press publications.

“Eurema’s Dam” is in the “tall tale” dimension. Eurema is a Greek word that means, roughly, “invention,” so the title means, “mother of invention,” and the theme is, more or less, “stupidity is the mother of invention.” The hero is Albert, “the last of the dolts.” Because he isn’t smart enough to do anything himself, he keeps inventing machines to do things for him. Of course, it turns out that those machines are useful for lots of other people as well. So Albert gets rich. But he doesn’t really care about that. And what really ends up bothering him is that the machines he creates think he’s a dolt, too, and when they take over … well, you see where it’s going. It’s fun enough, but it doesn’t have the true inspiration, the magic, that I find in his best stories.

The bottom line is, these two stories are fine short stories. And I don’t mind at all that Pohl and Kornbluth and Lafferty, all in their own ways greats of the field, got Hugos that way. But, as I’ve already discussed, in my post on the Nebula winner, “When it Changed,” by Joanna Russ, there were a lot of great short stories that year, and these are not great, just pretty good. My vote goes to either Russ’ “Nobody’s Home,” or to one of a couple of Tiptree stories, “The Milk of Paradise” or “And I Awoke, and Found me Here, on the Cold Hill’s Side.” (The other nominees, by the way, were “When It Changed,” “And I Awoke …,” and Robert Silverberg’s “When We Went to See the End of the World.”)

It was a pretty great year for Tiptree, really. Besides those two stories mentioned above, and the novelette nominee “Painwise,” she published “And I Have Come Upon This Place By Lost Ways,” “Filomena and Greg and Rikki-Tikki and Barlow and the Alien” (aka “All the Kinds of Yes”), “The Man Who Walked Home,” and “On the Last Afternoon” – all wonderful stories. Other neat stories from 1972 include the greatest title ever, Robert Sheckley’s “Zirn Left Unguarded, the Jenghik Palace in Flames, Jon Westerly Dead,” plus “Alien Stones,” by Gene Wolfe and “Lamia Mutable,” by M. John Harrison.

Rich Horton’s last article for us was a review of Threshold of Eternity by John Brunner and Damien Broderick. His website is Strange at Ecbatan. See all of Rich’s articles here.

“Zirn Left Unguarded” not only tells its title story but about 4 others as well, in the space of about 5 pages. I ran into it as the lead story in Brian Aldiss’s anthology Space Opera, and it really does set the tone nicely for that book.

Ah!! Now I definitely need to track down my copy and read it. Thanks for the mini-review Eugene!