A couple of years ago I read an early John Brunner novel called Threshold of Eternity, published as half an Ace Double. Here’s a bit of what I wrote about that:

Threshold of Eternity was first published in New Worlds, December 1957 through February 1958. The Ace Double version came out in 1959.

It opens in California in 1957 or so, as one-legged Red Hawkins encounters a French-speaking girl who couldn’t possibly be there — and, indeed, it turns out that Chantal Vareze was just in London. What’s stranger is the other person they soon encounter, a man named Burma who turns out to be from thousands of years in the future.

We jump, then, to the future, where one Magwareet is helping to coordinate humanity’s desperate war against mysterious aliens called The Enemy. One of the side effects of their battles, and also of a strange entity called The Being, is temporal surges, which can throw people into the far past. And Magwareet has just realized that his friend Burma has been flung into the past …

Cool stuff, eh? And things continue as Red and Chantal are carried into the far future, where the two eventually agree to help with the war against the Enemy, help which involves more trips to the past, a weird situation where multiple copies of the main characters coexist uneasily, and a wild and transcendent ending concerning the true nature of The Being, leading to an unexpected and not quite successful ending. Here’s how my review closed.

It’s all kind of a mess, but amid all that there’s no denying Brunner’s imagination — even if it comes off as downright 1930s superscientific guff much of the time. It’s interesting to note that Damien Broderick, one of the underappreciated SF writers of our time, and a writer with a history of fascination with wild SF ideas, has written an “elaboration” of Threshold of Eternity, due out from Arc Manor later this year.

Here then is Damien Broderick’s elaboration, from the Phoenix Pick imprint of Arc Manor. And how has Broderick treated the original material? The answer is – very successfully, and with full faithfulness to Brunner’s original vision, coupled with some very enjoyable expansions of events only hinted at in the New Worlds serialization (and not even mentioned in the Ace Double version), and with a couple of modernizations of the character relationships that pretty much work as well. 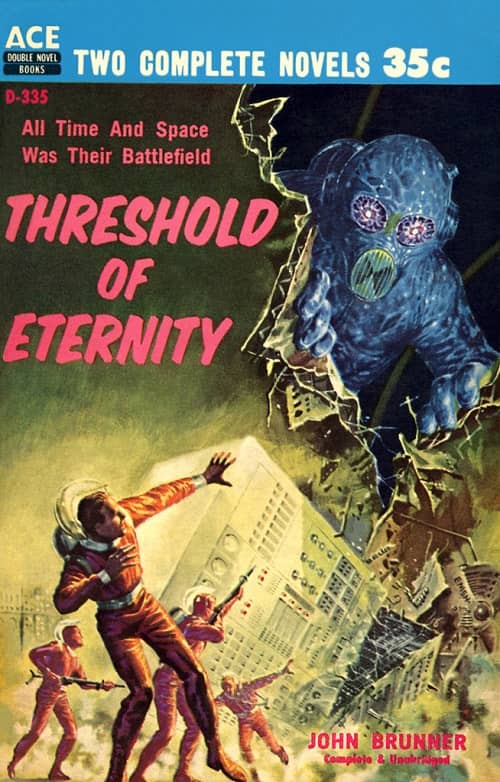 The central story, as I note, is the same: two people from the roughly the present day (actually, one from the 1950s and one from the 2030s) are taken into the very far future and join the desperate battle of humanity again the alien Enemy. This battle takes them back in time – to the very distant past, to just a few hundred years before our time, and to a few centuries in our future. All comes to a transcendent and pretty philosophical conclusion.

Broderick’s expansion deepens the characterization considerably. Red is a more believable, and his closing sacrifice more powerful, and Chantal in particular is filled out. Her sexual orientation is changed from Brunner’s original, a change which, if perhaps not necessary to the story, still works, and her love story in the future becomes fuller. (But we do lose a hint of sexual tension/jealousy on Red’s part.)

The other change is an expansion of a number of segments set in the past of the main action. Brunner’s original had a couple of these segments, including a crucial one set in a post-Apocalyptic society in what is now Russia; but Broderick adds some more, based on some Fortean incidents that Brunner alluded to in some headnotes to the serial version: things like the story of the Mary Celeste, and of Kaspar Houser. These new segments are not really essential to the main story, but they are interesting and affecting.

John Brunner is one of my personal favorites, and I have always enjoyed his early, less polished, work. Threshold of Eternity is one of his earliest and most ambitious stories, but also a story he wasn’t really able to pull off. Damien Broderick has the chops to pull off what Brunner was trying to do in 1957 – chops Brunner developed later in his career, though he never revisited this particular novel. The revised and expanded Threshold of Eternity is an exemplar of how to deal with an existing imperfect work by another writer: treat it with respect, don’t alter the original message, but improve the novel much as one might imagine the original author might have done had he had the chance. This takes Threshold of Eternity from a interesting minor work in the oeuvre of one of SF’s best writers to a work that contemporary readers who aren’t already Brunner completists will enjoy, and should investigate.

Rich Horton’s last article for us was a look at the 1973 Nebula and Hugo Award winner for Best Novelette: “Goat Song,” by Poul Anderson. His website is Strange at Ecbatan. See all of Rich’s articles here.