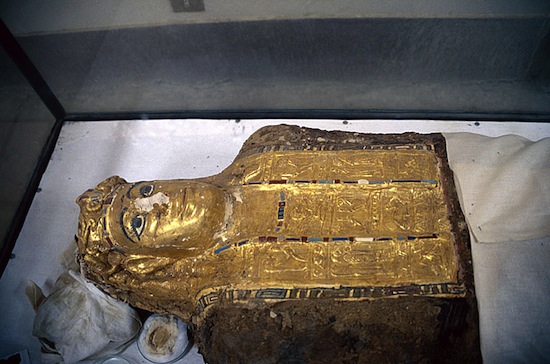 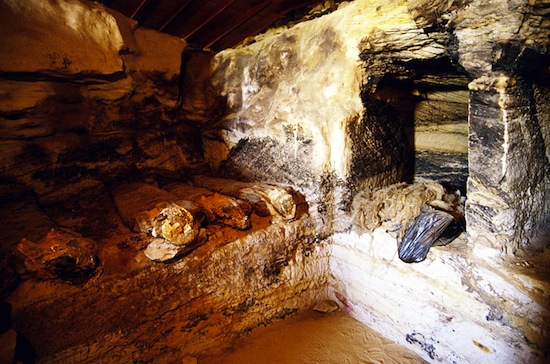 Tomb no. 54 in the Valley of the Golden Mummies.
The mummies, covered in dust, lie on the shelf to the left
and center. Creative Commons photo courtesy Roland Unger.

The Golden Mummies are far from the only antiquities of interest in the oasis. Several fine tombs, temples, and other remains livened up my visit. 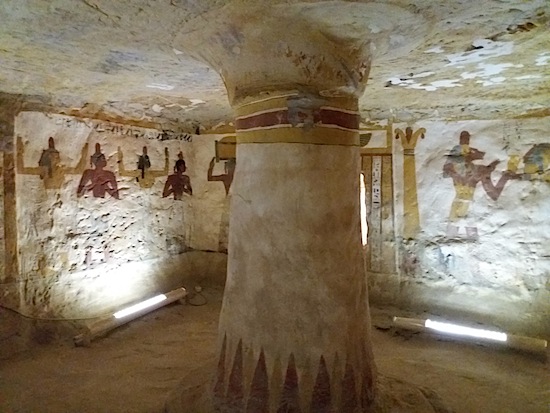 On a low ridge overlooking Biwati, the biggest town in the oasis, are a pair of interesting tombs from the 26th dynasty. This corresponds to the Late Period (664–525 B.C.), a flowering of Egyptian culture after the retreat of the Assyrians and before the arrival of the Persians. For more than a century, strong pharaohs revitalized artistic life and undertook ambitious building campaigns.

The 26th Dynasty seems to have been a high time in Bahariya Oasis as well. People had been living at the oasis since the Paleolithic, but it remained on the margins of Egyptian culture until the New Kingdom, then became marginalized again with the Assyrian invasion. With the advent of a unified Egypt, Bahariya saw quite a lot of new construction. 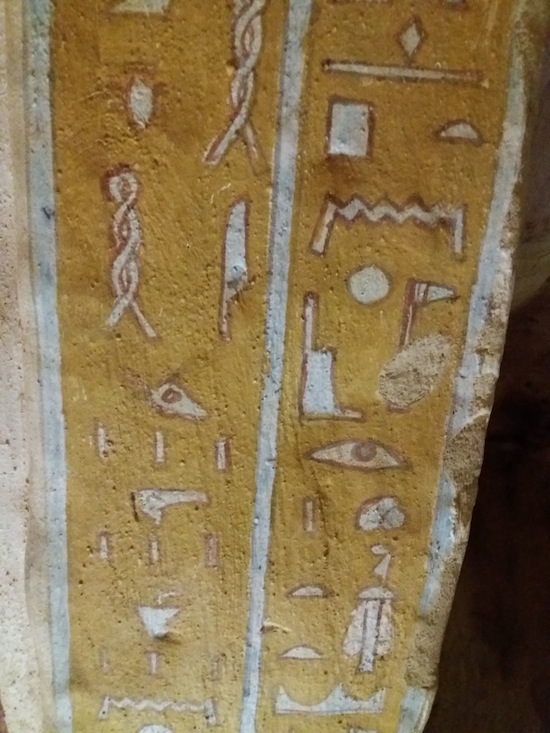 Some of the hieroglyphs are well preserved. Since this is a
private tomb, the art and writing isn’t as high quality as some of
the royal tombs I’ve shared on Black Gate before, such as these.

The first tomb I entered was that of Zed-Amun-ef-ankh, a wealthy local merchant. It lies at the bottom of a five-meter shaft cut into the top of the ridge. After passing through a short entrance passage, I found myself in a square room about seven meters to a side with rounded corners and a ceiling so low I had to stoop to avoid getting ancient paint in my hair. Six small side chambers contained stone sarcophagi, a few of which are still in place. The tomb was robbed in antiquity and reused in Roman times. It was robbed again in the early twentieth century and only stray finds were recovered by Egyptologist Ahmed Fakhry when he excavated here in 1938.

The walls are covered in religious scenes and the ceiling has a pattern of stars as well as twelve vultures representing the goddess Nekhbeyt. This goddess was considered the mythical mother of the king and in the popular religion of the Late Period was seen as a protector and a goddess of childbirth. It is unusual to see her image on the ceiling of a private tomb. Perhaps she was the special favorite of Zed-Amun-ef-ankh’s wife. 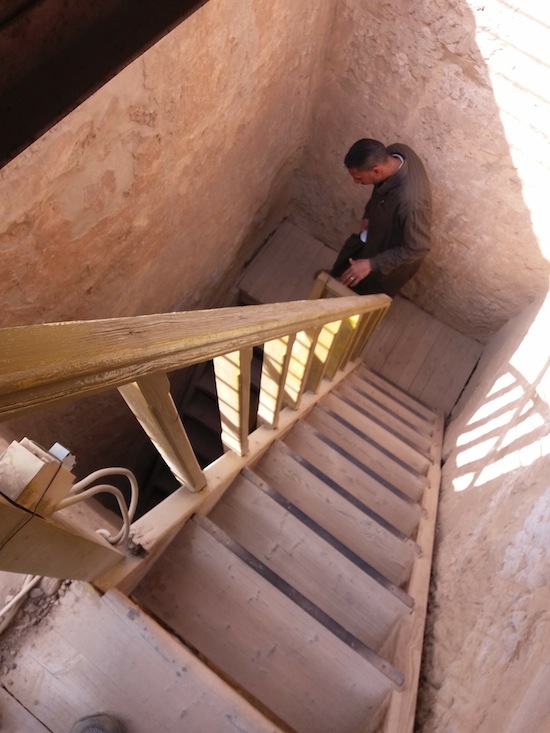 Descending into the tomb with the site guardian

The other tomb is that of Bannentiu, Zed-Amun-ef-ankh’s son. It is close by and lies at the bottom of a six meter shaft. Like the tomb of his father, it consists of a square main chamber with three side chambers for the burials. The paintings here are very well preserved. 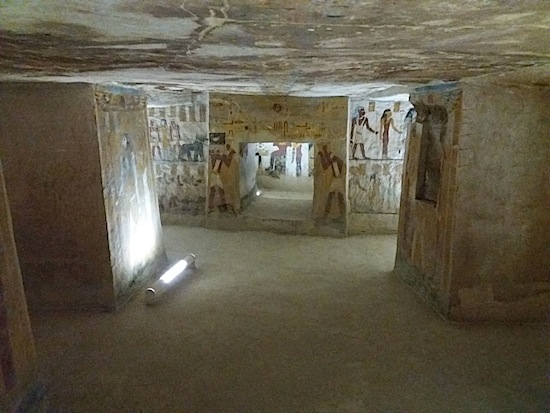 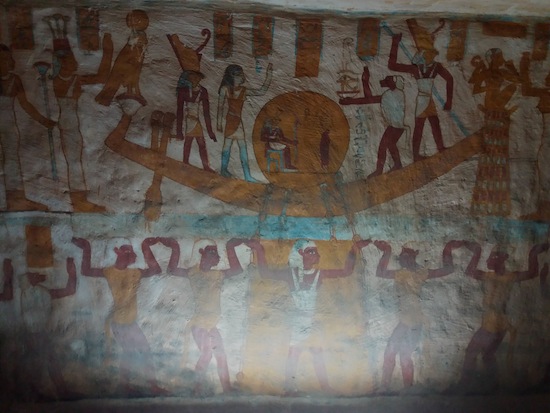 The journey of the sun god

Next week: the Temple of Alexander the Great, a Roman fort, and an early Christian church! 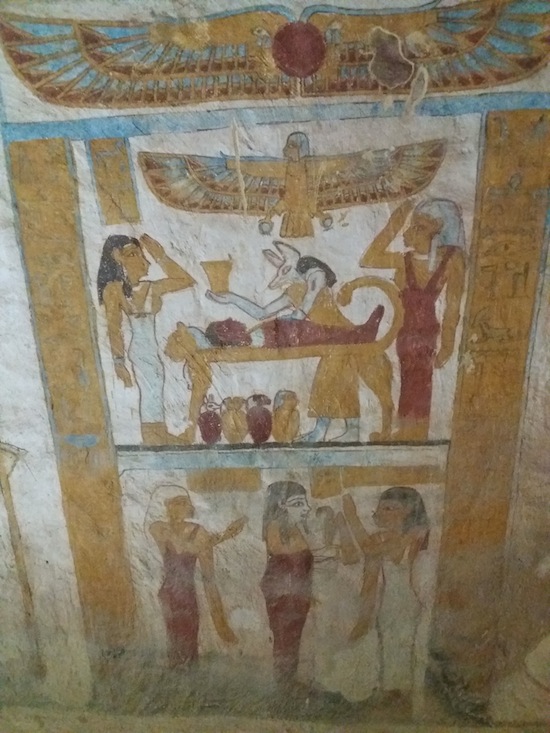 Anubis preparing the mummy of Bannentiu while Isis and Nephthys mourn. Bannentiu’s Ba, or soul, hovers above. 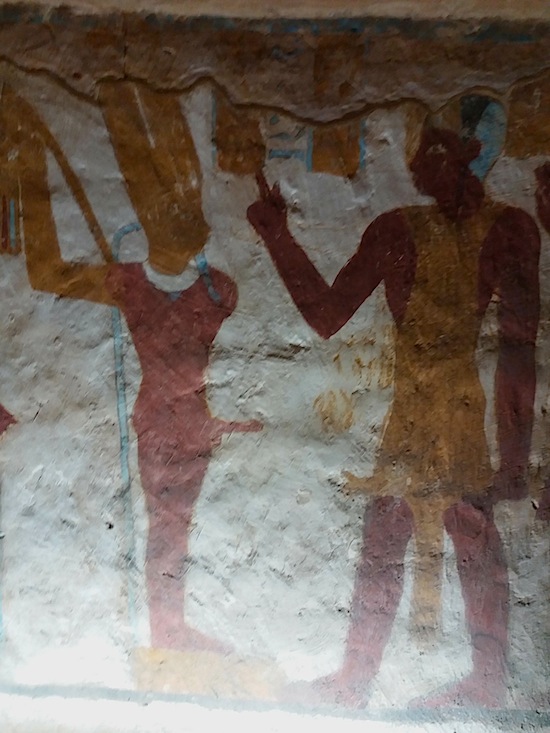 A priest named Iun-Mutef introduces Bannentiu to the god Min, who seems very happy to see him. Min was associated with fertility, male sexual prowess, and the potency of the king.