Poul Anderson (1926-2001) was one of the leading SF and Fantasy writers of the last half of the 20th Century. He won the Hugo Award no fewer than seven times for his short fiction, twice taking the Nebula for the same story. He was named an SFWA Grand Master in 1998, he also won the Gandalf Award as Grand Master of Fantasy, and he received numerous other awards including the Mythopeic Award and the Prometheus Award. His best known novel might be Tau Zero (which finished second for the Hugo in 1971). His extended Future History sequence collectively called the Technic Universe probably represents his best-known and best-received set of stories, and his most famous characters, Nicholas Van Rijn and Dominic Flandry, appear in that series.

“Goat Song” is a pure standalone story, not part of any series. It appeared in F&SF for February 1972. As noted in the title of this essay, it won both the Hugo and Nebula for Best Novelette. I would have read it first in Nebula Award Stories 8. At the time I remember being tremendously impressed, but on this most recent rereading its force had diminished. (I reread it in my paperback edition of Anderson’s very fine 1975 collection Homeward and Beyond, which includes one very significant and lesser known story, the historical “The Peat Bog.”) 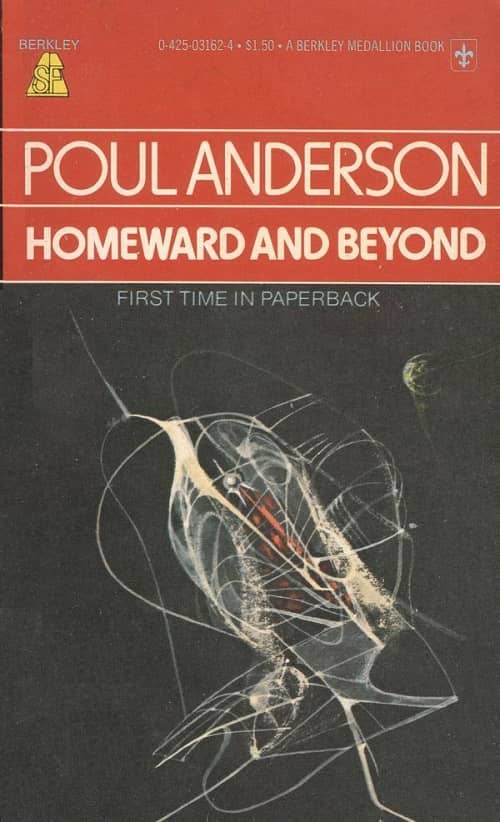 “Goat Song” is very straightforwardly science-fictional retelling of the Greek myth of Orpheus and Eurydice. The narrator, sometimes called Harper, lives in a quasi-Utopian future controlled by a computer called SUM. Everyone’s lives are carefully ordered, except in the wildcountry, where no laws apply. Population is tightly controlled, but everyone’s life history is recorded, and in theory they can be resurrected into a new body if they die. However, SUM will not do that until some far future time. Harper’s lover has died escaping an attempted rape — most sex in this future is extremely casual, to be had for the asking apparently, but Harper and she are interested only in each other.) Harper, disconsolate, retreats to the wildcountry, then decides to accost SUM’s human liaison (a beautiful woman who is reincarnated every seven years) and petition for his woman to be resurrected. She agrees to let him meet SUM in its fortress and ask for his boon – and eventually SUM agrees, with the condition – he cannot look back to see if his lover is following him until they leave. Of course, he fails at this – and his woman is returned to SUM’s memory banks immediately. So Harper decides to foment a rebellion against SUM, on the grounds that only in freedom from SUM’s tight control will people truly be people… and in so doing he creates the conditions for his eventual doom…

Some of the things that impressed me at first and didn’t work as well more than 4 decades later include a) Anderson’s stylistic tics, which can get tiresome once you realize what he’s doing (that said, the numerous different names Harper gives his lover are nicely done), b) at that time the idea of an SFnal retelling of a Greek myth struck the teenaged me as really cool, but since then I’ve come to regard it as a bit old hat – which may not be Anderson’s fault!; and c) the concept of a computer rigorously controlling a future civilization was a thing back then – a fairly common trope – and it doesn’t come off the same way now.

So what else might have won these awards if not “Goat Song”? The other Nebula nominees were

“The Animal Fair,” by Alfred Bester
“Basilisk,” by Harlan Ellison
“The Funeral,” by Kate Wilhelm
“In the Deadlands,” by David Gerrold
“Patron of the Arts,” by William Rotsler

The other Hugo nominees were the Ellison, and Rotsler stories, plus Gardner Dozois’s “A Kingdom by the Sea” and James Tiptree, Jr.’s “Painwise.”

And, really, though I like several of these stories, I can’t argue with “Goat Song” winning – perhaps I’d have picked Tiptree, or Wilhelm, or Dozois, or even Bester’s return to the field. It’s interesting to note, at this remove, the attention beloved fan artist William Rotsler got for his foray into professional writing, with this novelette that became a novel in 1974. (He had written a couple of earlier stories, and more stories and novels followed (much of this later work media-related.) It seemed to me that almost all his fiction was forgotten soon after – “Patron of the Arts” itself is genial and somewhat interesting but fairly minor work.) My actual choices as the best novelettes of 1972 (which I wrote about in Steven Silver’s fanzine Argentus some while back) are Keith Roberts’ chilling “Nazis win” alternate history “Weihnachtabend” and Gary Jennings’ extremely funny story “Sooner or Later or Never Never.”

Rich Horton’s last article for us was a look at the the 1973 Nebula Award for Best Short Story: “When it Changed,” by Joanna Russ. His website is Strange at Ecbatan. See all of Rich’s articles here.

Great review. I’d forgotten that “Painwise” and “Goat Song” appeared in the same issue of F&SF. I first laid hands on F&SF later the next year, but I bought back issues whenever I could; that one was an early acquisition and a frequent reread. In retrospect, one of the most important pieces for me was Baird Searles’ film column, where he reviewed Cacoyannis’ film of Euripides’ THE TROJAN WOMEN. It was decades before I saw the movie itself, but the review affected how I saw the overlap between classics and fantasy (and who Helen of Troy could look like).

I’m glad someone besides me remembers Jennings’ “Sooner of Later or Never Never” and I’ll have to check out the Roberts story. I somehow missed Roberts almost entirely the first time around.