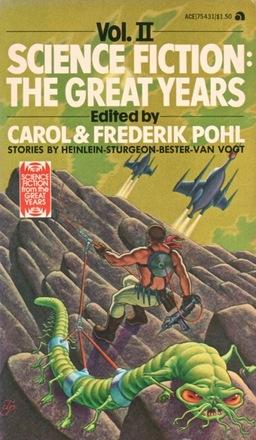 I think it’s kind of cool that I can remember when and where I found Science Fiction: The Great Years, Volume II, some 36 years after I bought it.

In the spring of 1976 my friend John MacMaster introduced me to science fiction, by bringing me Shakespeare’s Planet by Clifford D. Simak and Piers Anthony’s Ox when I was home sick from school. I was in the seventh grade, and I felt very adult, reading grown up books instead of Alfred Hitchcock and the Three Investigators (not that there’s anything wrong with Alfred Hitchcock and the Three Investigators — those books rule.)

I was thoroughly captivated by both novels, and afterwards began looking for anything labeled “science fiction.” One of the first items I found was Jacques Sadoul’s 2000 A.D: Illustrations From the Golden Age of Science Fiction Pulps, a dazzling art book containing hundreds of illustrations from American SF and fantasy pulps — showing stalwart men and women piloting spaceships into the dark reaches of space, curious aliens, sinister robots, mist-covered landscapes on far planets, and stranger things. It ignited a burning curiosity in me for all things pulp-related, and I began to haunt bookstores looking for any relics of that bygone era of pulp SF.

Shortly after we moved to Ottawa in 1976, I discovered that Canada’s capital was crowded with old bookstores, many of them hidden away in small shops on Bank Street and Sparks Street in the heart of downtown. I took the bus downtown every Saturday, returning home with bags filled with marvelous old paperbacks. It was in those crowded old shops that I first discovered Roger Zelazny, Robert Silverberg, Poul Anderson, H.P. Lovecraft, A. Merritt, and countless others.

And one afternoon, in a venerable old bookstore on the east side of Bank St, I came upon Science Fiction: The Great Years, Volume II edited by Carol and Frederik Pohl, which bore the words Science Fiction From the Great Years in a bold red stamp on the cover. And what a cover! It showed an intrepid explorer climbing an imposing stone wall, with a thoroughly alien companion at his side, while two slender ships screamed across the green sky overhead.

This was it. This was exactly what I had been looking for. I bought it and hurried home, and over the next few years I hunted down all the other volumes that bore that same red stamp, a promise of old-style pulp adventure. 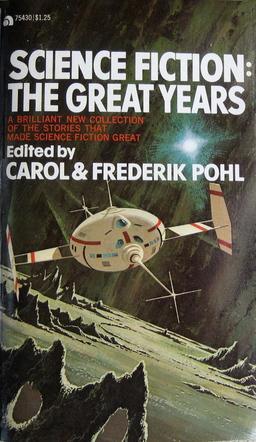 In their introduction, Carol and Fred Pohl made it clear that they thought the stories that they’d selected for this anthology (and in the first in the series, Science Fiction: The Great Years) were among those that had helped the genre to mature. And while that’s a pretty grand statement, they made a fairly strong case.

The Second Collection of the Stories that Made Science Fiction Great

The stories in this volume are some of the best from science fiction’s years of formation and development. It was authors and ideas like those included here that helped raise the science fiction genre to the success and maturity it enjoys today.

Here are stories of adventure, and insight, and imagination; stories with a freshness and a sense of wonder that could only have been written during the exciting GREAT YEARS OF SCIENCE FICTION.

And here’s the complete table of contents, including an 85-page novella by Dirk Wylie and Frederic Arnold Kummer, Jr.

Science Fiction: The Great Years, Volume II was published by Ace Books in February 1976. It is 276 pages, priced at $1.50 in paperback. The cover is uncredited.

It has never been reprinted, and is currently out of print. There is no digital edition.

I remember when these were available new in the spinner rack, or more probably on the shelf at Pickwick Books. I didn’t buy then as I had already read the stories in the digests they were pulled from. Now I kinda wish I had them, as those digests are long gone.

Well, the good news is that they’re available online, and relatively cheaply — less than the cost of a brand new paperback. Amazon has over a dozen copies for sale from various vendors, and currently four of them are priced under $1.